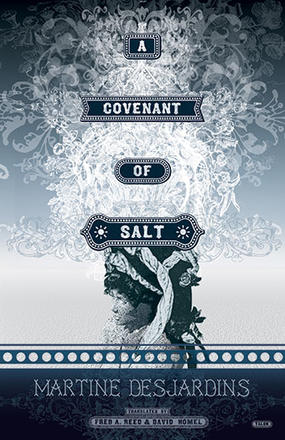 A Covenant of Salt

By Martine Desjardins
Translated by Fred A. Reed & David Homel

A Covenant of Salt

Since the death of her parents in 1791, Lily McEvoy has lived as a recluse in her isolated Armagh County manor with her two maidservants and Titus, the farmhand who has become her whipping boy. But tonight, the heiress is expecting company. Her guest is Master Anselm, the legendary ... Read more

Since the death of her parents in 1791, Lily McEvoy has lived as a recluse in her isolated Armagh County manor with her two maidservants and Titus, the farmhand who has become her whipping boy. But tonight, the heiress is expecting company. Her guest is Master Anselm, the legendary stone cutter who has transformed the estate’s abandoned salt mine into an immense funerary monument to the memory of the McEvoy family, sculpting bas-reliefs in the chapels, crypts and tombs he has carved out of the rock salt of its cavernous walls.

Lily is sniffing powdered salt in the attic as she summons the shadow of her father, the cruel Irish Rear Admiral Magnus McEvoy, hero of the capture of Quebec and absolute master of his estate, and of her mother, the mysterious Laurence, she of the webbed feet who emerged from the river of a stormy night.

But the same salt that has preserved Lily’s memories is desiccating her. Her obsession with the past now risks transforming her, like Lot’s wife, into a pillar of salt—crystallized by the family’s abominable secrets. These secrets, and the instrument of her revenge, she will today finally reveal to Anselm over their precipitous evening meal.

Drawing from the history of the conquest of Quebec and Irish legend, this is an exotic new way to tell a very old story.

David Homel is the author of nine novels and a memoir, as well as a series of books for younger readers co-written with Marie-Louise Gay. A prize-winning writer and translator, he has worked in documentary film, print and radio journalism. He lives in Montreal.

“Mining from the past, Desjardins extracts treasures without 'getting caught,' and surfaces like a breath of fresh air. A Covenant of Salt marries literary traditions in a sleek gothic ceremony, silvery salt sprinkled like confetti and the Saint Lawrence coursing through.
— Montreal Review of Books

Other titles by Martine Desjardins