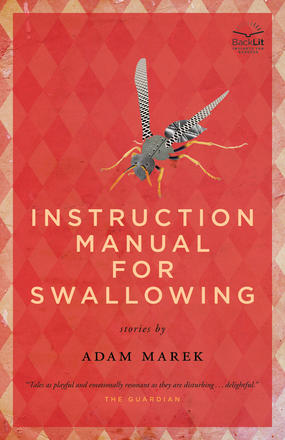 Exploring what happens when ordinary people collide with bizarre, fantastical situations, this collection of 14 short stories presents an engaging new voice in absurdist fiction. The stories are grotesque, hilarious, unnerving, and moving: a man discovers he has testicular cancer ... Read more

Exploring what happens when ordinary people collide with bizarre, fantastical situations, this collection of 14 short stories presents an engaging new voice in absurdist fiction. The stories are grotesque, hilarious, unnerving, and moving: a man discovers he has testicular cancer on the day that a Godzilla-like monster attacks the city in which he lives; a kitchen-hand is subjected to terrible peer pressure in a restaurant for zombies; a husband and wife discover they are pregnant with 37 babies; and a man travels into the engine room of his own body to discover Busta Rhymes at the controls. No matter how outrageous the subject matter of the stories, they have at their heart genuine human experiences that are common to us all. This book also includes an interview with the author.

"…a transgressive thrill...delightful."  —The Guardian

"Marek writes in a deceptively simple style that enhances the reader's ability to accept his wild imaginings as if they are ordinary events faithfully reported by a reliable narrator. In other words, Marek makes the extraordinary seem ordinary, perhaps because his characters are ordinary people who view zombies (for instance) in the same way we might view bad drivers: irritating but commonplace." —www.TzerIsland.com

"Acclaimed British author Marek's collection of short stories is something to shout about. . . . These stories are powerful, and although the situations are unreal, the portrayals of the emotions and humanity are very real." —Booklist (March 15, 2012)

"Adam Marek writes tales of the fantastic, the grotesque, and the impossible ? all set in familiar, even mundane worlds. The effect may be unnerving or moving or hilarious, but always there is the gripping sense of an idea gestating to a point just short of revelation. Underpinning Marek's fantasies there is a nagging psychological realism. In this debut collection, the English short story receives an injection of something new and compelling and spooky."  ?Alex Linklater, founder of the National Short Story Prize

"Each tale builds with mysterious suspense, bringing to mind Neil Gaiman with his fantastical imagination or Bret Easton Ellis with his frenetic intrigue. . . . This is a book that may hold a broad appeal for lovebirds, philosophers and zombie-lovers alike, and that's part of the fun." —Scene Magazine (January 2013)

Other titles by Adam Marek