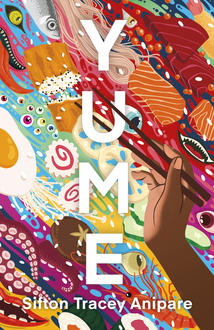 Author Sifton Tracey Anipare joins us in this edition of Off/Kilter to share more about her debut novel Yume (Dundurn Press)—how living and working as a teacher in Japan would inspire the dreams that would help her begin writing the novel and the Japanese mythology, books, film and video games that gave birth to its characters.

Leyla T: Can you tell us a bit about your debut novel Yume?

Sifton Tracey Anipare: I sure can! Yume (夢) is a literary urban fantasy about dreams (hence the title), demons, and a young woman teaching English in Japan who slowly tumbles down a Wonderland(ian)-rabbit-hole of culture shock. It’s jam-packed with imagery, nods, and references to Japanese culture and mythology (both historical and modern), and garnished with moments of dark disturbia, hope, and humour. Following along lines of being “jam-packed” and “garnished,” it also features lots of food and themes that revolve around eating, devouring, and the basic needs that must be (theoretically) met in order to feel satisfaction and fulfilment.

STA: The Japanese word “yokai” by itself isn’t necessarily one creature, but more like a class of supernatural beings. They can have a wide range of features, traits, and characteristics, and can resemble anything: a small fruit, a woman with a slit mouth, a giant foot, a sword, a 150-foot skeleton comprised of smaller skeletons, even a giant cloud of smoke are all examples of certain yokai. So, although the character dubbed “the Yokai” in Yume is briefly described (specifically in the prologue and in chapter 4), the rest is left up to the reader’s imagination.

Even though Yume sometimes refers to this group of beings as “demons” or “monsters,” this class of beings includes more than just these two entities. Had I picked a specific yokai with a specific set of visual traits, it would have turned into a very different story. “The Yokai” was purposely written as something hard to describe or visualize to represent the difficulty in describing or visualizing the supposedly random people we see in our dreams. (According to science, the people we see in dreams are processed from the hundreds of thousands we’ve seen at some point in our lives. Neat, eh?) But personality-wise, the Yokai is kind of like a big kid – curious, open-minded and trusting (to some degree, of course), loves to play and have fun, and most of all, wants to feel included. Which I think all people (and our inner children) want, deep down, even though we don’t always like to admit it.

LT: Like the character Cybelle in the book, you also lived and taught in Japan for a period of time. Tell us a bit about that experience and if/how it influenced your writing of the book?

STA: I’ve been writing fiction stories since I could write, but I only got serious about it when I was introduced to NaNoWriMo two months into my teaching position with the JET Programme in Japan. However, I spent a year in Japan before JET working at an eikaiwa (English conversation school) where I predominantly taught students as old as 15 but as young as six months. It wasn’t an easy time—I had been dreaming about going to Japan since I was nine, and I had to return home in between jobs due to a family emergency—but I had lots of fun and learned so much about myself and about life in general. I loved living there and consider Japan my second home. So, when I tried NaNoWriMo for the second time, I really wanted to write a story about my experiences in Japan but couldn’t think of how to make them sound interesting. At first it was just a long list of anecdotes and conversations that didn’t really fit together.

As luck would have it, I have also been in the habit of writing down my dreams since I was in high school. I read a suggestion somewhere about adding things from your dreams into your writing for inspiration, and when my dreams in Japan started getting really vivid and scary (the frequent appearances of a mysterious young man and a sinister video game antagonist), the two ideas started to blend together. I ended up with a protagonist that stuck out and was often treated like a monster in one hand, and in the other, I had a group of literal monsters that could completely blend in and move among the crowd, or were only visible when the veil between our world and theirs was thinnest. In the end, I felt like they matched up pretty well.

LT: Are there any books, fantasy/ magical that you love that have inspired your own writing or that you might recommend to those who enjoy Yume?

STA: I think some of my general writing style has been influenced by some of Francesca Lia Block’s earlier books. I read Girl Goddess #9 and Violet and Claire in high school, and I was enamoured by the idea of writing about a world of darkness streaked with pink, like a strange candle representing hope in a scary, desolate situation (or something like that). But for Yume specifically, the biggest inspiration was definitely Lewis Carroll’s Alice in Wonderland, which has always been one of my favourite stories (and which I’m sure will be apparent in the overall plot, as well as the chapter titles), and this really cool, twisted video game spin-off by American McGee called Alice: Madness Returns that I fell madly in love with. Oh, and Haruki Murakami’s After Dark was a big inspiration for Yume’s Chapter Two.

Otherwise, it was mostly movies that inspired the book: I tried to describe most of the dreamy scenes with Spirited Away and Sakuran in mind, and I listened to a lot of various soundtrack music to get the mood right, too. (There was a lot from Bleach, Lost in Translation, and I think Kingdom Hearts 2, among several others!) And although I’m not nearly at her level, I highly recommend Holly Black’s Modern Faerie Tale Series, especially “Tithe.” If anyone asks, Kaye Fierch is Cybelle’s hero.

LT: If you could choose one director to turn Yume into a film, who would it be and why?

STA: This question is hard. Years ago, I would have loved to see what Hayao Miyazaki would do with the story…but then he retired (and then said he may or may not retire ^_^). Now, I want to say Jordan Peele...but Ava DuVernay is good with fantasy and Nia DaCosta is good with horror...and then there's Mika Ninagawa, who directed Sakuran (which is a visual masterpiece) and I would love to see her take...

LT: I read that you love video games—any favourites?

STA: Legend of Zelda has to be one of my favourite series! “A Link to the Past” and “Twilight Princess” got me through some seriously rough times. The second series would be Final Fantasy, specifically 6, 7 (the original and the remake…so far!), 9, and 15. And of course there’s Alice Madness Returns, and the Kingdom Hearts series. There’s also a game called Pocky and Rocky that I’m pretty sure cemented my desire to move to Japan (and then whatever seeds were planted into my subconsciousness just blossomed when I started writing Yume). I should dust off my Super Nintendo and try to beat it sometime. That game was impossible, though, so we’ll see.

A special thank you to Dundurn Press and Sifton Tracey Anipare for sharing more about Yume with us!