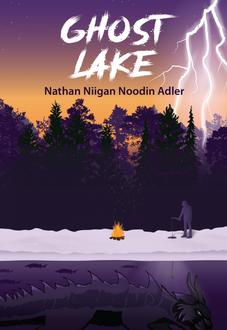 Nathan Niigan Noodin Adler joins us in this edition of Off/Kilter to discuss his second collection of speculative short stories,  Ghost Lake (Kegedonce Press), all set on a fictional reserve in Northern Ontario. Below, Nathan shares more about how the setting, inspired by a mash-up of places, takes on the role of main character, his work to sort out the reoccurring cast of characters and layered timelines within the collection, and the familiar elements of mystery and thrill within traditional Ojibway stories.

LT: Can you tell us a little about your newest book Ghost Lake?

NA: Ghost Lake is a collection of inter-related short stories all set in the same location, a fictional reserve in Northern Ontario, which is also a setting in my novel, and features a cast of characters who make cameo’s in each other’s stories. So a character that appears as a minor character in one story, will then go on to star in their own story, and the other characters will then take a back-seat becoming a minor characters. It’s actually pretty layered, so it was tough trying to sort out all the connections and timelines, making sure everything is consistent and that there aren’t too many glaring anachronisms. Most of the stories feature an interaction or encounter with something mysterious or inexplicable, or dangerous. 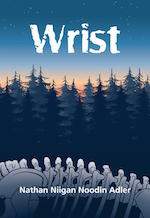 NA: Well, when I was writing Wrist I’d never written a novel before, so I really had no idea what I was doing. I mean, I’d read a tonne of novels, so I knew what I liked, and what kind of aesthetic I wanted Wrist to have, and some ideas I wanted to explore—but I’d never paid any attention to the craft of writing, so it was all intuition and stumbling around in the dark. It got easier after my editor Kateri made me write a plot synopsis, it really helped crystallize where the narrative was going, and the parts I needed to fill-in, in order to get there. Also an expectation of delivering finished material every two weeks that was ready to be edited, I was lucky I had so much rough material to work with.

I think I still sort of like the process of stumbling around in the dark, feeling my way around until I have an idea of where the walls are, and then I can start working out the finer points like furniture and décor. So in that way the writing process is similar, I don’t want to have everything worked out with detailed outlines, I like having some of the broad strokes roughed out so I I’m not completely lost, but I also like the element of surprise and figuring things out as I go, and that element of the unexpected, so the places the story can go can be a surprise to me, it keeps it fresh. And I learned I like fire a lot.

LT:  In your writing, nature and the land itself is imbued with life—it is its own character with its own memories. What role does the natural world play in your stories? What does it communicate?

NA: I think in this book, the setting IS the main character, it is the one thing that ties all the other characters together. We learn about who the place is through the character arcs and their vignettes; the land is always there in the background. And I think the land really does hold memories, and those memories are encoded in stories, stories and place are intimately connected, and I like to think that if stories get forgotten, the stories are still there, encoded in the land, and so maybe they can be recovered.

LT: Is the setting of Ghost Lake based on a real place or any of your own experiences? Was there a reason you chose this particular story as the title for the collection?

NA: Ghost Lake is a fictional place, but it is also based on a mish-mash of places, mostly inspired by my Reserve, 22A1, Lac des Mille Lacs First Nation. There are a lot of parallels in terms of the history of flooding and displacement, and the community returning to their lands. And Tyner’s Creek is based on a small tributary of the Grand River. I was thinking about place names, and not knowing the original place names, and how so many places have been renamed, and so those were the ideas I was working with there. Decolonization through story.

LT: What are you reading right now or looking forward to reading this year? Are there any speculative fiction titles or authors (within this genre or another) that have inspired you?

NA: I just finished reading We have Always Lived in the Castle by Shirley Jackson (a nice/creepy little horror novel), I’m currently reading Carmilla by Joseph Sheridan Le Fanu (an early lesbian Vampire story), next I am planning on reading Aura by Carlos Fuentes (one of the few books written entirely in the second person), and after that Home Waltz by G. A. Grisenthwaite (a talented writer I had the good fortune to work with on the Bawaajigan Anthology), so I’m looking forward to reading more of his writing.

LT: As the popularity of speculative fiction continues to grow, we’re starting to see more fantastic Indigenous writers like yourself sharing stories through the lens of this genre and adjacent genres like horror. From the perspective of your own writing—what is it about the genre that lends itself so well to the sharing of Indigenous stories and experiences?

NA: Well I think Indigenous Peoples have always told stories with ghosts, and creatures and spirits, and sky people, spanning all kinds of genres, so it isn’t the genre that’s lending itself to the sharing of our stories so much. I think Indigenous folks are getting the chance to have their stories heard now, because there’s a wider interest in hearing our stories. Traditional stories can often have elements of the gruesome, startling, thrilling, mysterious etc. is not something foreign to Ojibwe stories, it’s pretty intrinsic. And though the stories in Ghost Lake are solidly in the Urban Fantasy genre, many do touch on other genres like horror, fantasy, mystery, thriller, historical fiction, romance, realism, the psychological and the mythic. Also my Aunt Lilas loves Speculative Fiction so I’m really excited for her to read Ghost Lake!

Nathan Niigan Noodin Adler is a writer and an artist who works in many different mediums, including audio, video, film, drawing & painting, as well as glass. He is an MFA candidate for Creative Writing from UBC and a member of Lac Des Mille Lacs First Nation. 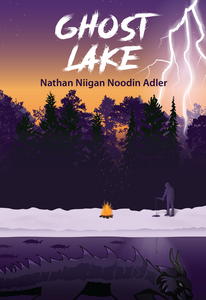 October 29, 2021
Short Story Month: Outside People and Other Stories by Mariam Pirbhai