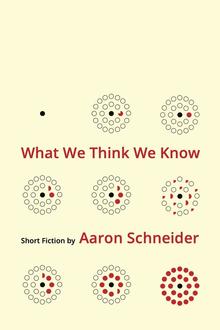 Short story writer and lit mag editor Aaron Schneider shares his collection  What We Think We Know (Gordon Hill Press), its play with the medium in the form of diagrammatic stories, stories in the form of questions, stories that break apart and metastasize. Including the Journey-nominated "Cara's Men (As Told to You in Confidence)", excerpted below.

A (short) interview with Aaron Schneider, author of What We Think We Know

Aaron Schneider:  What We Think We Know is a collection of experimental short fiction that pushes the boundaries of what the short story is and can be. It includes stories in the forms of diagrams, charts and research data, a story that consists largely of questions, a story about a cancer victim whose sentences fragment and metastasize, and a handful of other artifacts that extend and sometimes elude the definition of the short story. What ties the pieces together is an interest in generating new forms of writing to speak to and reflect contemporary experience.

AS: What I love most about the form is that it doesn’t exist. There is a history and certain idea of the form that belongs to and develops over that history, but neither that history nor the shape the form has taken over the course of it are determinative. What has been done doesn’t define what we can do. In the final analysis, the short story is nothing more than a word or a page count, a space, within which anything is possible, and every time we sit down to write, we are (re)inventing the form.

AS: This may seem odd given the kind of writing that I do, but it’s Alice Munro. I’m from Owen Sound and have been in London for the last two decades, so I grew up and continue to live in the region in which her work is grounded, and I have a deep connection with her material. Not a week goes by that I don’t walk past the building on Western University’s campus where Rose met her husband in Who Do You Think You Are? I am also endlessly fascinated by the precision and complexity of her sentences.

An excerpt from "Cara's Men (As Told to You in Confidence)"

Cara tells you about the men that she has slept with, across a table in a crowded campus bar over a series of Friday afternoons in the fall when you are both a little drunk and the light is easing you into the evening. You have to lean forward to hear her clearly. The clamour of graduate students and professors talking together, their noise and closeness, how they keep bumping into your elbow, the back of your chair, and apologizing, closes a circle of privacy around you, contains and deepens the intimacy of the conversation:

Her first boyfriend was a Jehovah’s Witness. They were both in Grade 8. His parents didn’t want him dating her, or dating at all, and he told them that she was a classmate and that they had been assigned to work together on a project that term. She waited in the entryway of his apartment, and felt: the massing silence. The shining parquet. The atmosphere of piety, certainty and disapproval. They climbed the stairs of his building to a locked door that opened onto the roof and made out on the top step pressing against the steel of the door. The echo in the stairwell magnified and restrained their movements. She was wearing a skirt. He pushed inside of her, and she felt nothing. No pain. Nothing. It was only for a few seconds, and then he stopped. The next day he told her he had wanted to see if she would let him do it. He was already distant when he said this, not expressionless, but withdrawing into disdain, and they broke up.

Cara makes an issue of the strange and hurtful behavior of her exes. She asks you, “Why?” Her voice dramatic, irate, almost panicked, uncomprehending. In these moments, her face is open, caught between surprise and bewilderment. Why would he do that? To me? But she never says anything like this about her first boyfriend, the first man to be inside of her. It is as if she accepts him, as if his behavior is explicable, not excessive or aberrant, a common, understandable cruelty.
She tells you about him and the echoing stairwell before she should, before she knows you well enough to share her oldest hurts. You are flattered by her trust. You like what this says about you, and the kind of man that you are: you want to reach out to comfort her, to take her hands that are sitting folded, still, forgotten, you think, on the table in front of her. You want to touch her resignation into tenderness, but you don’t: it’s not yet time. You wait, for now. And listen.

In high school, Cara dated a boy from a home like hers—breaking, but not yet broken. He was erratic, and she now wonders if he is a manic depressive, maybe a sex addict. He liked her to bite down hard on his penis. Hard! He cheated on her and they broke up. She went to university and he became a photographer and a bon vivant, an offbeat dandy. Right now, he has a mullet and a potbelly, wears a novelty belt buckle that he bought in Calgary, and that he tucks ostentatiously under his gut. He is considering moving to Kingston for its history and its market square. He travels on assignment or on a whim. Next month, he is going to watch a rocket launch in Kazakhstan. “Why?” you ask. “Because he can,” says Cara, “because he wants to.” You are fascinated and a little bit horrified by the people Cara knows: they are self-absorbed, recklessly unapologetic, and utterly unlike you.

This ex calls her sometimes and talks about how much he misses her. Cara tries to explain to you the silence she hears collecting around his need, the emptiness reverberating on the other end of the call. She imagines him hunched, taut with confession, an arch terminating in the phone: he has never stopped caring about her. It was always her. It will always be her. Becoming more hysterical, more sincere: his next girlfriend would deep throat him on the living room couch. Deep throat him. And all he could think about was her. He offers this as a demonstration, a grand gesture, to make a point about the depth and intensity of his obsession. He doesn’t mean to be hurtful.

You nod. You are sympathetic. But you can’t touch any of this, her understanding, the tenderness of her condescension. Does she still care about him? Does she like these intrusions, these eruptions of the past into the present, or merely tolerate them? When she tells you about him, her voice turns soft, calm, and you can hear her disappearing into herself.

Cara did it with two boys in the yearbook office. She isn’t normally elliptical, but when she talks about this, and she only does twice and briefly, she uses words that stop short of the possibilities they suggest. Her eyes, which you expect to be locked on yours, to demand your attention, drift away. You wonder if this is a pleasurable reverie, a memory of pain, or the aftereffect of having given over control, a lasting diffuse blankness. Is that what sex is for her? A surrender? You think about this often and at length, but what you imagine is as vague as Cara’s words: you arrange the three bodies, but the arms and legs and mouths won’t fall easily into place; the tableaux you invent are tentative at first, blurred by generality, and then too precise. The teenagers take on the sharp unreality of porn actors, and you shy away from what comes into focus. You can never make it happen the way it must have. You are disoriented by the excessive, predictable intersections of flesh, and repelled by the same force that attracts you. 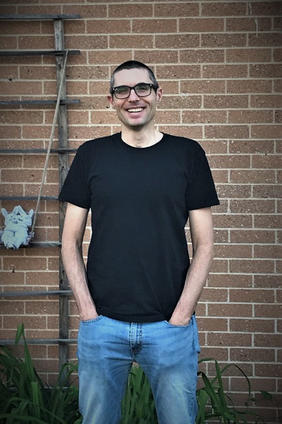 Aaron Schneider is a Founding Editor at The /tƐmz/ Review and was a Founding Editor at The Rusty Toque. His stories have appeared/are forthcoming in The Danforth Review, Filling Station, The Puritan, Hamilton Arts and Letters, and Prolit-. His story "Cara's Men (As Told to You in Confidence)" was nominated for the Journey Prize by The Danforth Review. He runs the Creative Writers Speakers Series at Western University. His first book, Grass-Fed, was published by Quattro books in the fall of 2018.

Stay tuned for more Short and Sweet; check our equivalent of TV guide right here for what's next in our short story month series. And follow along on social with #ALUShortandSweet.

May 3, 2022
Short Story Month: The Midwife of Torment & Other Stories