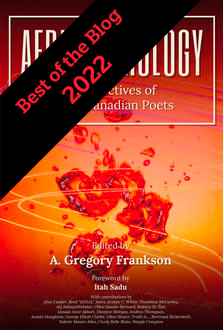 This month, we shine a spotlight on a collection of essays and poems about the contemporary experience of Black poets in Canada,  AfriCANthology: Perspectives of Black Canadian Poets (Renaissance Press), edited by A. Gregory Frankson. This anthology includes a variety of emerging and established Black writers, dub poets and spoken word artists across Canada. In Frankson's essay, he shares how "the diversity of experiences of Black people from across Canada is foundational to the lived realities of “Canadian-ness” and all the traumas, contradictions, and paradoxes our national identity generates".

Being Black in Canada can feel at times like an overwhelming burden. One’s Blackness can sometimes unfairly mark a person as the sole source for the “cheat code” on what Canadian Blackness is genuinely all about. There is always someone who wants “the Black perspective” when such an opinion would be convenient for them to have.

But there is no omniscient expert.

No matter the nature or tenor of their experiences, no individual can comprehensively represent the fullness of what it means to be Black in Canada based solely on their personal story. The narrative of Blackness is not a straightforward one: it is as different for someone in Moncton as it is in East Vancouver, in Brossard as it is in Iqaluit. Our paths are as unique as our fingerprints—something that becomes particularly obvious and powerful when our stories are written down and published.

In AfriCANthology: Perspectives of Black Canadian Poets, the contributors make no grand claim to speaking on behalf of an entire “community” of people in this country.

When Evelyn C. White uplifts the memory of the great African Nova Scotian poet Maxine Tynes, she reverently describes Tynes’s dignified and triumphant journey through life, permanently impacted by polio that ravaged her body but not her brilliant mind.

Afua Cooper writes that our “world as African diaspora people was smashed to pieces in the great Maafa. We can never go back to what was before. We will constantly be in the process of creating our world anew. A part of this, from my perspective, means renaming ourselves.” The cycles of active reinvention Cooper references are a form of cultural celebration that mock any attempt to pigeonhole Black existence into slavery, the Underground Railroad, the American Civil Rights Movement, and little else. Aly Ndiaye, aka Webster, succinctly sums it up: “Canada (and Quebec, from where I write these lines) has become a master in the art of historical camouflage, notably in its least glorious moments.”

Cicely Belle Blain reminds us that when we oppress Black non-binary people, we multiply their pain because “this was never our ancestors’ way. In indigenous African cultures (and many other cultures around the world), trans and gender non-conforming people have been referred to as ‘teachers’, ‘heroines’, and ‘diviners’ … In Vancouver, many Black queer, trans and Two-Spirit people experience the daunting and haunting experience of being both invisible and hypervisible.”

Dwayne Morgan writes about the success of the annual When Brothers Speak / When Sisters Speak spoken word concerts in Toronto despite a persistent lack of support from arts councils. After yet another failed grant application, he was told that perhaps the shows’ season had passed—despite the extensive mainstream media coverage, a years-long performance waiting list, and enduring enthusiasm from the audience. Meanwhile, Thandiwe McCarthy struggles to find his place in cultural circles “[b]ecause anyone that sees Black creative excellence in New Brunswick is forced to reflect on why they have never seen it before. Anyone who enjoys Black art is immediately made aware of the provincial void that exists for it.” And Calgary’s Bertrand Bickersteth learned hard truths in his childhood: “I stopped playing hockey at age twelve. Later, I stopped playing all sorts of games whose rules disadvantaged my perspectives and devalued the experiences of Black people throughout the Prairies. I stopped seeing Alberta as an innocent perpetrator of racist attitudes … Alberta is not innocent.”

Chloé Savoie-Bernard incisively expounds on her writing journey in Montréal: “I know that the literary community, for me, has been everything but a safe space, that since the beginning, I have had the impression of fighting to be closely read, to be truly read, to not have my books reduced to labels … I wonder if the only people who are allowed this privilege, to be truly read, are the people whose identities do not frighten. The privilege of whiteness, the privilege of maleness.”

Asante Haughton poetically riffs on the concept of safety:

neither of them mine,

That got me dysfunctional, why

Why it’s not safe in

this world that I’m in

when I’m in this skin

Me and my kin

even if we bend to every whim

and we just can’t win.

Reed “iZrEAL” Jones has had enough: “I’m over Canada, the global North, the Western world. Like, I’m over it. If you’re over it too, then do something about it. It ain’t that hard.”

These artists represent the community in aggregate, not in isolation, no matter the individual viewpoint. Morgan summarizes the sentiment perfectly: “I believe that an important way forward is to not think that any one event or initiative can respond to the needs of the Black community, and instead focus on how we can amplify as many voices as possible that are doing the work to bring our stories to life.”

We contend with the messy business of melding and merging these experientially disparate, often divergent, always insistent Black voices into projects like AfriCANthology not because it is easy, or to give mainstream society a readymade compendium of simple solutions to complicated, deep-rooted problems. We don’t assemble stories that traverse expansive intellectual and sociocultural terrain because celebration, interrogation, and commemoration are trendy pastimes. No, this work is crucial because the diversity of experiences of Black people from across Canada is bedrock foundational to the lived realities of “Canadian-ness” and all the traumas, contradictions, and paradoxes our national identity generates.

Nor, in our unruly diversity, can Black Canadians abandon the modern necessities inherent in the next stage of nation-building out of exasperation, no matter how tempting that path may appear. As Andrea Thompson insightfully concludes her essay, “Ultimately, whether my words make you nod your head in agreement or shake it in disagreement, either result is fine … The most important thing is that we keep the conversation going. As Reverend [Martin Luther] King said so eloquently: ‘it’s not the violence of the few that scares me, it’s the silence of the many.’”

Until people in this country stop studiously ignoring our history, reacquaint themselves with and take authentic steps to heal historic betrayals and injustices, and then equitably co-create a better future for the full complex diversity of our national citizenry, this work can never cease. It is what spurred the creation of AfriCANthology and informs social justice and anti-racist action. It is who we are, warts and all.

If you don’t like the reflection you see in the mirror, fellow Canadians, then it’s time to take yourselves to school, get to work, and gain new perspective. Unfortunately, Black folks don’t have time to teach you. We’re too busy creating art, redefining culture, and writing our own histories. We’ll let you know if we need any help.

In the meantime, our stories can bße read right now in books like AfriCANthology, disabusing readers of their prejudices and demanding an immediate response. So, what are you waiting for?

Greg Frankson is a literary artist, community activist and the editor of the new book AfriCANthology: Perspectives of Black Canadian Poets, published by Renaissance Press. 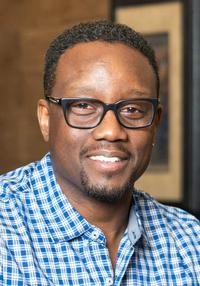 Greg Frankson, a.k.a. Ritallin, is an educator, activist, consultant, and award-winning literary artist. Since 2004, Greg has featured in numerous audio recordings, videopoems, public speeches, articles, and literary journals. He appears in three anthologies, including the award-winning collection The Great Black North (Frontenac House, 2013), published four poetry collections (Cerebral Stimulation, 2005, Lead on a Page, 2012, A Weekly Dose of Ritallin, 2015 and Cerebral Confections, 2021), and is the editor of the critically acclaimed AfriCANthology: Perspectives of Black Canadian Poets (Renaissance Press, 2022). Greg is a 2012 national poetry slam champion, a 2013 inductee to the VERSe Ottawa Hall of Honour, and won Best Author in the 2021 ByBlacks.com People’s Choice Awards. He is the past poet laureate of the International Initiative for Mental Health Leadership, appeared on CBC TV’s Canada’s Smartest Person, and is the former poetic commentator on Here and Now Toronto on CBC Radio One. He is the founder and CEO of Voice Share Inc., which focuses on helping individuals and teams strengthen their inclusive leadership and effective communication skills to accelerate transformative change. Greg is passionately focused on living according to his personal mission statement – to present the vision that inspires others to positively change the world.