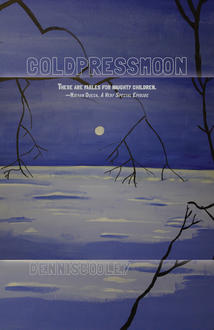 Joining us in this edition of ALU Poetry Express, Cooley explains how his fascination with the sciences and biology in particular have been an unlikely influence on his work and how with time his work has become more like metapoetry. Read on for the full Q&A and read the poem "The Girls and the Bear" from the collection!

During the month of April, you can buy any of our featured Poetry Express books for 15% off + free shipping in Canada. Just use promo code NPMexpress at checkout. Or you can find it at your  local independent bookstore.

Dennis Cooley: When I was a kid I was taken by fairy tales, and then when we had kids, my wife, Diane, and I, read to them. The two daughters (Dana and Megan), threw themselves in and soon were reading them too. The girls also loved, with us, stories in which animals figure as very human and larger-than-human powers. So there was the personal and familial interest. As a writer I had developed an interest in retakes on published work material. David Arnason, had published several books of what he called "fractured" tales. I was wildly excited about what he was doing, so I got after it. I published a small book, goldfinger, in 1995, with staccato press in Winnipeg, then returned to the subject and wrote some new pieces when Turnstone invited me to send them a set of manuscripts. 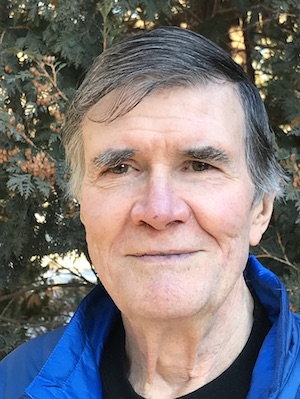 [Image Description: A front facing photo of the author cropped at the neckline. The author looks directly into the camera. He is light skinned, has short grey hair and brown eyes. He smiles with lips touching. He is wearing a black shirt beneath a bright blue jacket. The photo is taken outside and behind the author are pine trees.]

DC: I find it very hard to say. I could say "science," possibly, but that would not be unexpected, not for me at least. I minored in biology as an undergraduate at the University of Saskatchewan, and I continue to be fascinated with the sciences—astronomy for one—when they contemplate large patterns. One book, This Only Home, concerns cosmonauts, sailors, and astronomers. But biology mostly—in, say, Departures. That's particularly true of the evolution narrative. I have no advanced knowledge in science but I am fascinated by the reach of its understanding and the power of its explanations.

DC: It has changed, but not so much as one might suppose. It's possible, I think, to find very early in my writing qualities that have persisted. I suppose the more recent work has become more inclined to statement, to metapoetry, and to long, unlined poems that move in irregular syntax and wobbly grammar. Also texts that perhaps can make only dubious claims to being poems. I'm not one who believes that poets necessarily get better or "develop." It may be that years of reading had introduced me to options, so that when I began writing I had a repertoire in my head.

DC: I've always loved Bill Bryson enormously, and in recent months I've been into, and back into, several of his many books, including one of the best books I've ever read, his The Origins of Almost Everything (more wonderful science). He is a great stylist and a master of narrative rhythm. He also shows an exceptional gift for anecdote and a wicked sense of humour. A staggering lot of knowledge too. The world is brimming with able and dedicated poets, and how do we know and honour them all? I mention only a very few new, re-read, or new-to-me, books of poetry: Christian McPherson, Walking: On the Beaches of Temporal Candy; Karen Enns, Cloud Physics; Al Rempel, Undiscovered Country; Lori Cayer, Mrs. Romanov; Garin Cycholl, Rafetown Georgics; Sally Ito, Alert to Glory; Sarah Robyn, My Shoes Are Killing Me.

DC: A toss-up. Portugal or our cottage at Winnipeg Beach.

Portugal because the landscape is varied and stunning. Because the people are warm and unassuming. Portugal because it has Lisbon, a modern urban city that is easily navigated, gently inhabited; and an interior old Moorish city, Évora. Portugal because much of it is varied and breathtakingly rural: "May 29 1997": "To the monoliths. A very rural area, wonderfully unfilled with signs or mappings. Sounds of cow bells, slow and distinct, cork trees filling the pasture, thick with birds, their sounds and movement, dirt road, erosion along the side. A profusion of flowers, everywhere. And then we see the cattle, huge and long-horned, impossibly handsome, and white birds among them. [. . .] Wild roses everywhere. And the sun, there is sun and it is warm, and we are happy." Portugal because it loves poetry and eats squid.

The cottage because it is green and birded and quiet and sunny. The cottage is where the family can knock about, and a where a person can ease pleasantly into it. It's where you can dawdle and dream, and where I often write.

A poem from cold press moon

The Girls and the Bear

Perhaps the girls were stricken with premonition. It is hard to tell in stories like this, and I myself do not know. It would be good to say they read something in the bear's eyes, in the way his head dipped, something that would save them from the little man. I would like to say that. For in these stories animals do talk, they prophesy too. As you know, they are wise and kind, some of them. That's what the mother had told them, if you love and care for them. She had read quite a few stories and she knew this to be true, knew it in her heart.

When the bear is released from his spell and is revealed as a prince, or at least a rather good-looking man with a well-connected brother, I might release the young women into the stories you and I as children have read. I have also thought of updating the story. I could turn Snow White and Rose Red away from the prince, who as bear had treated them tenderly, who had drawn out their love for the wild they had smelled in him. They could turn their backs on the bear with the muskiness and the sad eyes who should or should not, did or did not, help them. Some may wish it so.

Do you wonder, if they could see you on the other side of the page, would they love you too?

Recipient of the League of Canadian Poets’ Life Membership Award and the Manitoba Writers’ Guild Lifetime Achievement Award, Dennis Cooley has been a key figure in Winnipeg’s literary community for over 30 years. For years a professor at the University of Manitoba, Cooley, now retired, lives and writes in Winnipeg.

During the month of April, you can buy cold press moon and any one of our other featured Poetry Express books for 15% off + free shipping in Canada with promo code NPMexpress. Or find them at your  local independent bookstore!