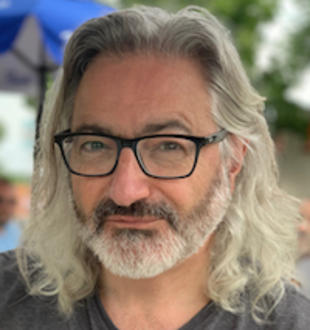 Author of the collection For It Is a Pleasure and A Surprise to Breathe (Wolsak and Wynn), award-winning poet Gary Barwin joins us to talk more about his own fluid definition of ritual, the wonders of language and the "hurly-burly" of life as it's happening over any kind of perfection (if there is such a thing).

See more details below
Tagged: for it is a pleasure and a surprise to breathe, gary barwin, wolsak and wynn, writer's block

All Lit Up: Do you have any rituals that you abide by when you’re writing?

Gary Barwin: I used to sacrifice something before I started, but I found that I got blood on the keyboard. What is a ritual? I’ve found that I ritualistically try to be open to writing anywhere and at any time and try not to be too precious about it. I’ve written things in food courts, while waiting for my family, in the emergency room with my sick child, in a beautiful vaulted library while surrounded by gold-titled leather-bound books, in workshops I’ve taken or given, while trading my soul to a bright red-horned fella who promised I’d be able to play blues guitar. Of course, I can identify certain states or moods that I find myself in, and then try to work with them. Right now, I’m very tired since I didn’t sleep much last night, so I’m emotional and quite unguarded having had too much coffee but also buoyed by having finished the acknowledgements page for my forthcoming novel in a way that I’m quite pleased by. Ok, that’s a pretty good place to write from, as long as it doesn’t require too much complicated rational thought, like working through a difficult plot point, or doing my taxes which I’m supposed to be doing now instead of this. Sorry CRA. So that’s a flow I can go with. And this ol’ computer—I’m comfortable with it—the key feel and the tempo it suggests to me—and here I am sitting in my backyard, listening to mourning doves while the dog digs up something just past the begonias. That’s a kind of ritual. But later, I might go upstairs and put on some Baroque recorder music and work on something else. I see ritual as “opportunity” and “recognition.” I don’t need a particular pen or to face north-by-northwest, though I might get into using that pen and facing that direction, relishing the texture of it all.

Of course, if it doesn’t quite work out, I might do something else. Or work on another kind of creative project that relies on a different modality, a different way of operating. If a chameleon doesn’t feel like being a particular kind of blue on a certain day, it can just hop onto something green. Some days I do a lot of hopping. In the end, I trust the process. What else is there to do?

GB: When I was a kid—and ok, I still do this—I often looked first at the paper the writing was on. Its colour, weight and texture. I’d look at the typography. Its shape, colour, print. The heft of the book. Its dimensions and design. What a marvel language is, writing is, publishing is. What an astounding surprise to have narrators, or to have poets’ voices or marks. I know that this sounds naïve and simple, but really it is a wonder. That we can make these things. That the very mechanics of literary creation exist. My selected poems is called, For It Is a Pleasure and a Surprise to Breathe. And it is! And to read. And to write. Even when I’m sad, depressed, despondent or worn-out, I know whatever terrible things we humans are responsible for, we have this remarkable if often duplicitous technology. It can trick us, feed us seductive lies, or unpack a world. Writing, art, communication, analysis, creativity. It might even allow us some insight into the remarkable technology of other creatures. What is publishing for a snail? The long iridescent mark, the slow ooze, the sarabande of the shell, the tiny undulations of its horns. And my favourite fictional character? It’s a toss-up between written language and spoken language. Or else the narrator.

GB: I’d love to be clever and say the writing writes me: I’m a host for the beautiful contagion that is language. The meat that I am having been colonized by thoughts that have no body but need me, like the bacteria that live inside my gut. Like the several of my children who have moved back home. But I would say that listening to language, listening to the collective heart- and braintrust that is language and literature and that I am able to access by being a language user, a reader, and a writer, has opened up both the world and myself. Whitman said, “I contain multitudes” (I didn’t even know he knew me) but I do—we all do—because we have access to language and culture, if we’re listening carefully—and so we have the possibility of transcending the narrow walls of our own ego, at least a little bit. Ezra “always on the right side of history” Pound said that “the artist was the antennae of the race.” I think we all are antennae, but let’s erase the “of the race” part of the sentence. I’m more a bucket in a rainstorm. Or maybe even, a parking lot, a field, a surface, a raindrop, a thing in the presence of rain. No wonder my socks are getting moldy.

When I teach, I often talk about writing “from the inside out” or “from the outside in,” and by this I mean writing is a connection between two modes. “From the outside” means beginning with some material, some stuff, some words or story or form or technique and seeing where it leads you, what it evokes, how it guides you. Of course, whatever you do is has the conceptual fingerprints of your doing it, of your aesthetics or sensibility. “From the inside out” means starting with a sense of things, with a story, a concept, a curiosity, a feeling, a feel, an emotional or conceptual shape which you imagine “inside” you and then you play around with a way of articulating or embodying it. The process is often a mix of the two—relaying things back and forth between inside and outside. That’s why I write. As well as all the other reasons. I don’t think there is one reason. It shakes and flickers, roars and bobs as the day, or the month, or the years go by. 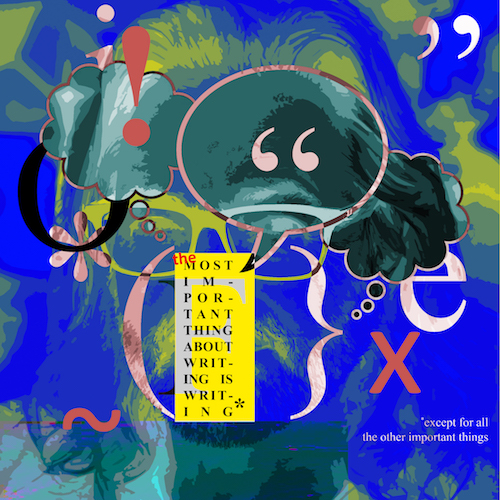 GB: I forget which writer it was, but when asked to respond to a question such as these, they said “No. My perfect writing day involves writing and not answering questions.” But the thing is, I like answering such questions. It’s not the attention—though honestly it is hard to resist the implicit flattery of being asked about oneself—so much as it is satisfying to think though what I think, to share some of the experience, to use the occasion of answering a question as if it were a form with which to creativity engage, to play with its expectations, to communicate other truths through its screen. Once I was at a coffee shop and some former students (I used to be a middle school music teacher) asked me what I was doing and I proudly responded, “I’m working on a novel.” They said, “Oh how cliché,” and I thought, “Absolutely, but how great that I get to do it.”

I don’t know that I believe in “perfect” anything—that sets up expectations and a longing for purity, Platonic ideals of perfection, instead of trusting the process and your ideas, impulses and creative flow. Instead of “perfection,” I’d rather relish the wabi-sabi hurly-burly of actual life as it is lived, open to possibility, mistake, delightful error and unexpected opportunity. The hurdy-gurdy of the creative pratfall. Like when you get distracted from what you’re “supposed” to be doing and, having strayed onto Facebook, send a poem to a friend suggesting she write something back and within a few weeks you have completed a book MS together. (Thanks Lillian Necakov!) The best days are some combination of spontaneity, play and focus on a particular project. Unless they’re not. 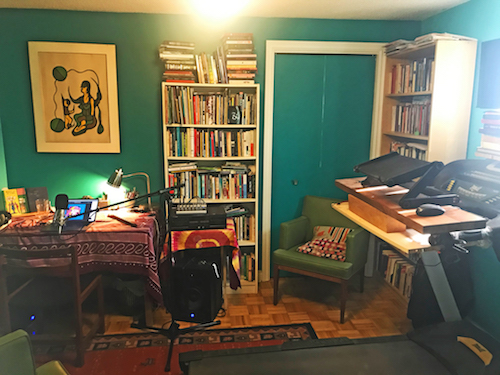 A glimpse into Gary's workspace

GB: “Do you want payment in islands or spaceships?” Islands. Obvs. 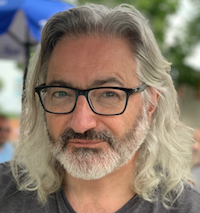 I have written more poems about sandwiches  than any other food, though I have written more than one poem about being inside a dog. My dog’s name is “Happy,” and at the moment he is barking his sheepadoodle face off at a neighbour’s dog, the name of which, I don’t know. Both dogs live in Hamilton, Ontario where I have lived for about 30 years. If you call this living. These days, my “day job” consists of writing and teaching, often as a writer in residence, or teaching classes and workshop, plus some design and art work, playing music, and also sometimes doing work for my wife’s criminal law practice. It took till I was over 50 for me to be able to have a job based mostly on my writing and other creative work. I’ve been spending the last months writing, creating art and composing and recording music. It’s a tremendous privilege that I’ve been able to do these things since I was a kid.

Y’know how I said I was happy about the acknowledgement that I just finished? Here’s the first paragraph: “’Now it seems to me the heart /must enlarge to hold the losses /we have ahead of us.’ Since I first encountered them as a teenager, I often think of these lines from Marvin Bell’s poem ‘Gemwood.’ To me they mean that while we must be ready for what the future brings, we must be also be ready for the extent of the losses of the past and present as we continue to learn. Like the universe itself, both past and present never stop expanding.”

I also ended it up with a touching line about my wife, but you’re going to have to wait until the novel comes out next year. It’s Nothing the Same, Everything Haunted: The Ballad of Motl the Cowboy.

This is my middle name:

I’ve published 23 books and tons of chapbooks and other kinds of things, but here are some more recent things:

Nothing the Same, Everything Haunted: The Ballad of Motl the Cowboy (novel, Random House Canada, forthcoming Spring 2021)

For It Is a Pleasure and a Surprise to Breathe: New and Selected Poems (poetry; Wolsak & Wynn, 2019)

A big thank you to Wolsak & Wynn and Gary Barwin for joining us on the ALU blog!

Read on for more Writer's Block >> 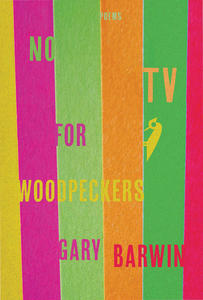 No TV for Woodpeckers