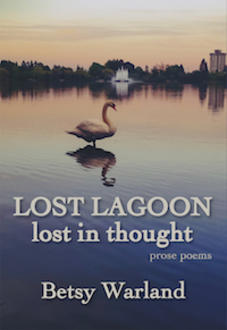 In her collection  Lost Lagoon/lost in thought (Caitlin Press) Betsy Warland explores a small body of water in Vancouver's Stanley Park as a source for revelations on our urban and natural worlds. In today's interview, Betsy tells us more about how this collection reinforced her understanding of the crucial nature of pace—a slowing down from the breakneck pace that technology and urban living sets out for us in order to connect with our surroundings and the underlying stories within the presence of everything.

During the month of April, you can buy any of our featured  DiscoverVerse books for 20% off (+ we'll send you a set of three poetry bookmarks so you'll always find your place.)

All Lit Up: What did you learn writing Lost Lagoon/lost in thought?

Betsy Warland: I had a Labrador Retriever when I lived on Salt Spring Island. When walking him in early evenings, he would stop at vegetation, rocks or a tree and forcefully exhale on them. Then, inhale. I thought “Doesn’t this dog know how to smell properly?” One twilight, I realized he was activating a scent by warming it up with his breath. Sometimes it was another dog’s “message” and sometimes it was other scents but collectively—all these scents were a vast library and he was their obsessive reader. Writing about lagoon life was much the same: slowing down, stopping, taking in each presence because everything is a story. Waiting for a reader.

ALU: If you were a character in a Choose Your Own Adventure story, what kind of quest would you be on? What three things would you have on your journey?

BW: It would be walking. Walking in an area (countryside, seascape, forest, etc.) I’ve never been in and have no detailed map for, only a general sense—yet not get lost for too long. I experienced this in Yorkshire on the Cleveland Way. It was quietly remarkable to walk for hours on a narrow, dirt footpath. There was no sound of cars, air traffic, rail, and seldom other hikers. The pace and sensations travelling by foot amid all the natural world beings was utterly unlike any other form of travel (including biking). The trail was often a foot away from high bluffs over the sea, so not paying attention could be disastrous! After walking 6-8 hours a day, we would approach the village we were staying in that night: gain more and more of a sense of it with each footstep. It was an entirely different sensation. Come to think of it—it’s much like reading: each word, line, page at a time. Three things: a pencil (of which I am very fond and writes up to 42,000 words!), a bit of paper, and water.

BW: Much is indicated above—walking, nature, observing the world. But music (particularly jazz, blues and classical) is also major. If I had been anything other than a writer, I would have been a composer. I’m always aware of spatial environment, rhythm, atmosphere, and sound. So much so, that I often harmonize with a bird’s song or even arbitrary mechanical sounds I hear.

Pacing is crucial in music and I’ve always encouraged other writers with whom I work to tune into the right pacing for their narratives and “score” how the pacing changes as the narrative unfurls. Technology and urban living speed us up and lock us into fast pace that is often a mismatch for literary pieces of writing.

Too, my decades of being a Buddhist practitioner continues to open up awareness and inspiration almost on a cellular level.

BW: Poems are in the very air we breathe—waiting for us to notice them. So much so that in one respect, on a cellular level they already exist. Notice a sensation, an odd word, and a perceptual conundrum (emotionally, intellectually, spiritually, etc.) that is buzzing around you. To do so, you have to present enough, quiet and focused enough, to notice. “Collect” three of these elements then let them provoke a poem. The more they seem to have little to no relationship with each other, the better. That’s your quest: discover how they indeed do. Discover what they have to teach you both in content and form.

A poem from  Lost Lagoon/lost in thought

By mid-February the bare branches

By mid-February the bare branches of the horse chestnut, cottonwood and alder

song. The Human, drawn out of her apartment, searched for the source. Knew who

but couldn’t believe that red-winged blackbirds would be here. Cautioning herself

that she must be imagining it, The Human walked north along the shoreline of the

lagoon, her body humming with excitement. The increasingly loud raucous,

unfurling chorus pulled The Human eastward to Chilco and Robson. There! In the

hundreds were alighted on every branch. It was them! Them! Decades and decades

had passed without their unbridled exuberance. As a solitary girl, The Child would

travel by horse or bike to their favoured territory. Although “the stream” was a

manmade dredge ditch to drain rain- water standing in the fields, it inadvertently

became a rare sanctuary for wildlife. Its diagonal line the only one in a grid of

straight ones in every direction for hundreds of kilometres.

the best black-black soils in the world. Nearly every tree removed. Upon arriving at

arrival of The Child: this her only hearty welcome home greeting. In that narrow

slice of wildness, The Child studied the stream life of muskrat, frogs, minnow,

turtles, insects, field mice, hawk, and songbirds. Every few years the farmers would

“clean up the dredge ditch.” Get rid of all tall grasses and small saplings and

muskrat lodges. Sometimes do controlled burning. The Child would plead with her

father but to no avail. Eventually, the wild ones would reclaim it.

Now. Here. In The Human’s seventieth year, between the lagoon, forest, and the

grid of high- and low-rises, The Human is saturated with their lusty, jubilant song.

Once again made whole. Sound. 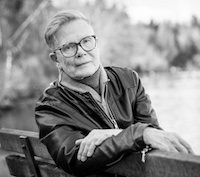 Betsy Warland has published 13 books of poetry, creative nonfiction, and lyric prose. Warland’s 2010 book of essays on new approaches to writing, Breathing the Page—Reading the Act of Writing became a bestseller. Author, mentor, teacher, manuscript consultant, editor, Warland received the City of Vancouver Mayor’s Award for Literary Excellence in 2016. Warland is the director of Vancouver Manuscript Intensive, co-founder of the national Creative Writing Nonfiction Collective, and established The Writer’s Studio at Simon Fraser University where per was director of the program from 2001–2012, a TWS Mentor in 2001–2003, 2005, and remains on TWS teaching faculty.

In March of 2016, Warland’s Oscar of Between—A Memoir of Identity and Ideas launched Caitlin Press’ new imprint, Dagger Editions. The book evolved from a new publishing template Warland created: an interactive online salon that features excerpts from per manuscript Oscar of Between, guest writers, artist’s work, and lively comments from readers. Oscar of Between was the basis for Lloyd Burritt’s chamber opera, The Art of Camouflage in 2018, which will be performed in the Indie Opera West festival (Vancouver) in 2020.  Lost Lagoon/lost in thought is Warland’s most recent book, published in Winter 2020.

During the month of April, you can buy  Lost Lagoon/lost in thought  and any of our featured DiscoverVerse books for 20% off! PLUS: FREE shipping! 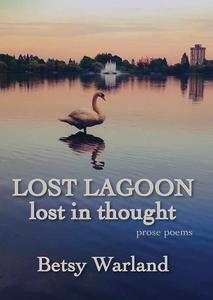 May 2, 2020
DiscoverVerse: Choose Your Own Poetry