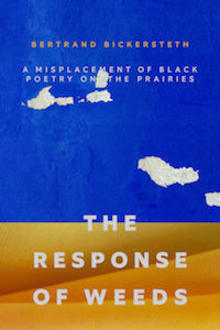 Bertrand Bickersteth kicks off a brand new week of ALU DiscoverVerse with The Response of Weeds (NeWest Press), a collection that explores what it means to be both black and Albertan. In today's interview, Bickersteth offers more about the inherent strangeness of Alberta and how, through writing, he was able to come to a sincere understanding of what it means to love the province's landscape and find his place within it. Keep reading for a poetry prompt from Bertrand that plays with terms and conditions and a poem from the collection!

During the month of April, you can buy any of our featured  DiscoverVerse books for 20% off (+ we'll send you a set of three poetry bookmarks so you'll always find your place.)

All Lit Up: What did you learn writing The Response of Weeds?

Bertrand Bickersteth: Alberta is a strange land. That’s not what I learned, actually. I always knew about the strangeness. Many of the things we Albertans are known for have at least a grain of truth. We’re rurally minded; down-home friendly with strangers. But we’re (at least) mildly xenophobic. We love Canada. We hate Quebec. We’re outdoorsy and cherish the environment. We prize and prioritize our oil industry. The Alberta I grew up in is ambivalent and it planted the seed of that ambivalence in me. This is why my collection is subtitled a “misplacement” of black poetry on the prairies. I cannot belong to the place I belong. Having lived in the Lower Mainland and the U.K., places with obvious natural beauty, I felt that misplacement emphasized, on my regular visits back to Alberta, in what I perceived to be ugliness. I tried to see beauty in the expansive horizon, the patchwork fields, but with the obvious exception of the magnificence of the Rockies, my compliments condescended to flatter. Then, when I moved back to Alberta from abroad, I had no option for condescending. There was no end-of-vacation return to real beauty. The flat landscape was flat and going nowhere. Somewhere in this period, I started to write poetry, partially to understand my place in this land. Necessarily, then, I had to try to understand the land. Strangely, the more I looked at the landscape, the more I found beauty that I had missed before. Strangely, the obvious magnificence of the Rockies didn’t compel me as they used to. Strangely, the expansive horizon, the patchwork fields were the elements that yielded a strange beauty that had clearly always been there, always belonged. And in that strangeness, I think, I found the beauty of my own belonging. So, I learned a simple thing in writing the RoW: I learned to tell the difference between my faked “I love this landscape” and my sincere “I love this landscape.”

ALU: If you were a character in a Choose Your Own Adventure story, what kind of quest would you be on.

BB: The one where the twin sister and brother are chasing their cat who is chasing a mouse who makes a desperate leap to safety but falls over a cliff instead, followed by the cat, the twin sister and the twin brother. The fall is fatal but they wake up in a room full of succulent foods arrayed sumptuously before them. Death has awoken a huge hunger in them and so they fall on the food, devouring as much as they can as quickly as they can. Sated, they lie back rubbing their bellies. Five minutes later, they are attacked by a sudden and voracious hunger. The food beckons. The twins look at each other wide-eyed. “We’ve died and gone hell,” moans one. “We’ve died and gone to heaven,” whispers the other. “Oh man, I’ve gotta write this down!” says the mouse (played by me). “Oh man, humans are stupid” says the cat (played by the cat), licking its paws on the edge of the cliff.

ALU: Where do you draw inspiration from outside your poetry?

ALU: Help us with a poetry prompt for our readers.

BB: Lately, I’ve been reading terms and conditions and marvelling at the inevitable poetry in them. I like how consistently they take common words (terms) and redefine them to suit their purposes (conditions). I have been taking some of these redefinitions and re-redefining them into a poem. These are some mild ground rules I use:

That’s it. These rules are purely arbitrary and, admittedly, I allow a slight tweaking for the sake of unlocking creativity. You’d be shocked how often it works. If you don’t believe me, try it for yourself.

A poem from  The Response of Weeds

we congregate in the principal’s office:

meted out to him

who impugned my face against the ground

because its darkness inspired

part-time prairie poet he was

meted out to me

the victim so called

Well, why did you fight back?

Why do you people

Now I have to punish you

The principal glares at me

his eyes a shock

on my way home

I pondered the view

from the top of a rare hill

with dandelions was splayed out below

by an instantaneous city

I saw the whole against the horizon

from the blunt encounter

I reached with a quiet fist

to rub at the soreness swelling

why did you fight back?

When the black child is six years old

he suddenly sees everything he has been before

and all that was sown before him and

it has been sown before him and

is the fundamental difference between

and the child that must see things 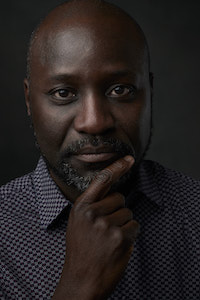 Born in Sierra Leone, Bertrand Bickersteth grew up in Edmonton, Calgary, and Olds, Alberta. After an English degree at UBC, Bertrand continued studying in the U.K. and later taught in the U.S. A return to Alberta provided him with new insights on black identity and most of his writing has been committed to these perspectives ever since. Although he writes in several genres, anticlimactically, the topic is always the same: what does it mean to be black and from the prairies? He has also given many public talks including a TED Talk for BowValleyCollegeTEDx called The Weight of Words. His poetry has appeared in several publications, including most recently The Antigonish Review, Cosmonauts Avenue, and The Fieldstone Review. He has also been published in The Great Black North and the forthcoming anthology The Black Prairie Archives (2020). In 2018, he was longlisted for the CBC Poetry Prize. He lives in Calgary, teaches at Olds College, and writes everywhere.

During the month of April, you can buy The Response of Weeds and any of our featured DiscoverVerse books for 20% off! PLUS: FREE shipping! 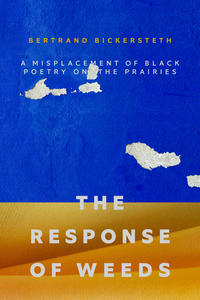 Response of Weeds, The

March 20, 2020 by Jane Munro
Read This, Then That: Groundhog Day Special

February 2, 2016
Where in Canada: If Settings had TripAdvisor Reviews