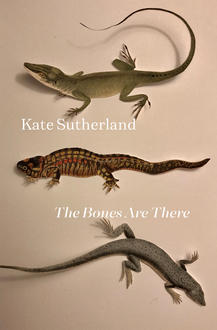 Kate Sutherland's newest The Bones Are There (Book*hug Press) is a collection of inventive collage poems sourced from travel journals, ships' logs, and other exploration literature that draw connections between various animal extinctions and human legacies of imperialism, colonialism, capitalism, and misogyny to both lament humanity's disastrous effects on the world and celebrate the creatures lost. Linked beautifully to the text are Kate's collage work on the cover and inside the book that Kate says "deepened my sense of what I was doing with the poems and thereby contributed to the book." Below, Kate tells us more about the relaxing hours spent playing with collage and the evolution of the visuals in her book.

I started making collages a couple of years ago with contradictory motivations. I was already making poems by collaging together found text, and I thought that if I began playing with images too I might get bolder in my juxtapositions of words. I was much influenced in this endeavour by Dadaist and surrealist art, particularly the photomontages of the brilliant Hannah Höch. But even as I hoped collaging with images would make me a better poet, I relished the idea of getting away from text. My whole life, not just the poetry part, is dominated by text, and I wanted a break, especially from text on screens. So I got myself a good pair of scissors and some glue and embraced analogue collage.

I first had fun with magazines, decorative papers, and illustrations from old anatomy texts, instructional manuals, and children’s books acquired at library book sales. But given my initial motivation, it’s perhaps unsurprising that I soon began mining images from the same ancient natural history tomes from which I had been borrowing text for poems. (Fear not, fellow book lovers! I didn’t cut up any of these beautiful old books but worked with printouts of scans from such rarities.) And before long the poems and the collages began to align.

I’m not a patient person, so was surprised to find how much I enjoy intricate paper cutting. It proved relaxing to spend hours cutting things out, even delicate many-legged, antennaed, or tentacled creatures. While I was working on part III of The Bones Are There, a long poem sequence about extinct frog species, suddenly I was cutting out frogs, many, many frogs with no clear idea of what I might do with them. Then I had the good fortune to encounter an excellent art teacher, Donnely Smallwood, who encouraged me to go 3D. I made frog silhouettes and built them up with acrylic paint and gesso until I had a physical as well as a poem sequence of frogs that began in vivid colours and gradually faded to black. I made tea-stained specimen tags onto which I copied fragments of my poems, then strung them all together to make small frog-shaped books. I have since incorporated entomology pins and bell jars into related projects. 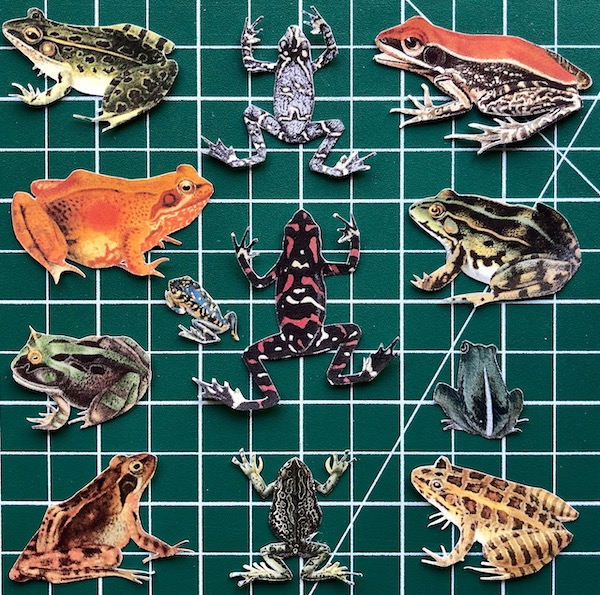 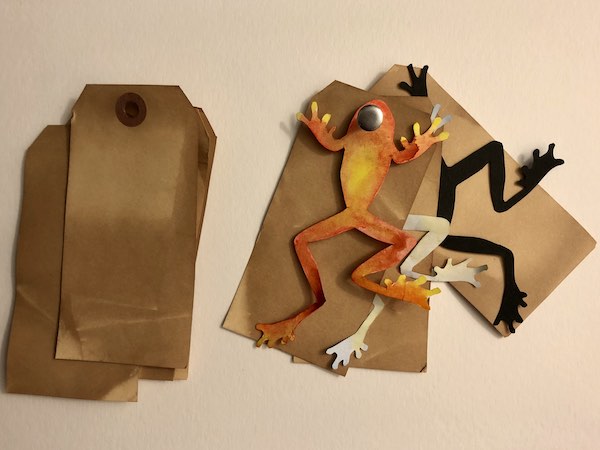 When I shifted focus to the title section of The Bones Are There in which I weave together the extinction stories of Steller’s Sea Cow, the Rodrigues Solitaire, and the Thylacine, my visual work again followed suit in the form of memorial collages to mark the dates of their disappearances. A detail from one of these is reproduced on the inside cover of the book. Finally, I began a series of postcard collages that folded right back into the poems. Titled Wish You Were Here, each postcard in the series is devoted to a different extinct species from a different island. Three of these are reproduced in the book, one on the title page of each of its three sections. 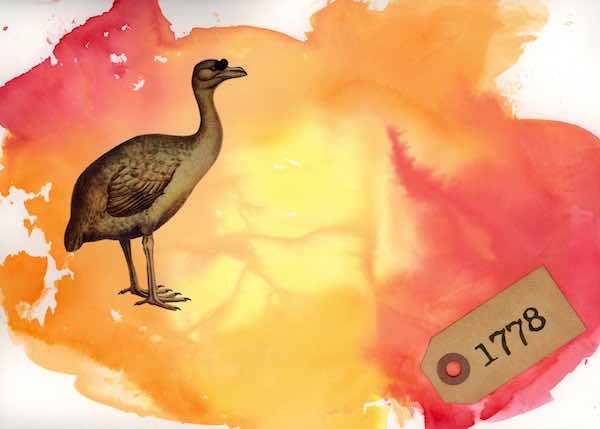 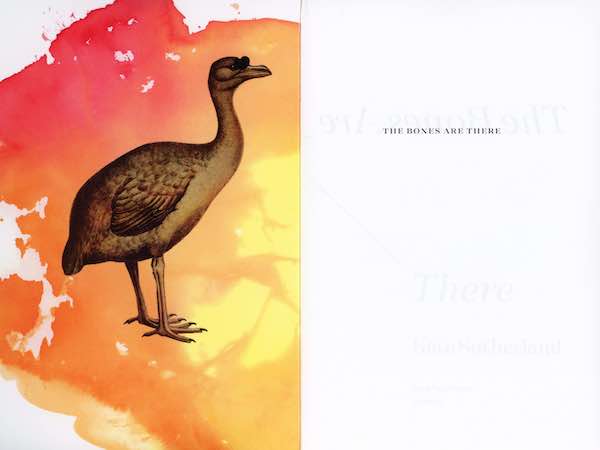 Reproduced on the inside cover 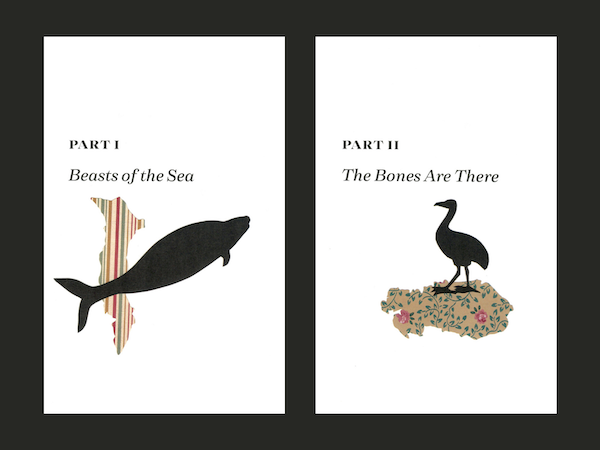 Section breaks from inside the book

Making the collages as I wrote deepened my sense of what I was doing with the poems and thereby contributed to the book. But it didn’t initially occur to me to make them part of it. It was designer Ingrid Paulson who suggested their inclusion and I’m very grateful to her for that and for integrating them so beautifully into her design. I continue to make collages linked to new poetic projects, but the dividing line is ever more porous for me, with the poems becoming more visual, the collages now sometimes incorporating text, and some of the collages seeming to me simply to be poems regardless of whether or not they include any words. Possibly my next book will be an art exhibit, or my first art exhibit will take the form of a book.

Kate Sutherland was born in Scotland, immigrated to Canada as a child, and grew up in Saskatoon. She studied first at the University of Saskatchewan, then at Harvard Law School. She is the author of two collections of short stories, Summer Reading (winner, Saskatchewan Book Award for Best First Book) and All in Together Girls, and the poetry collection, How to Draw a Rhinoceros (shortlisted for a Creative Writing Book Award by the Association for the Study of Literature and the Environment). Her stories and poems have appeared in various magazines and anthologies including Best Canadian Poetry and Best American Experimental Writing. She has done residencies at Hawthornden Castle in Scotland and at the Leighton Artist Studios in Banff. She lives in Toronto where she is a professor and conducts research in the fields of Tort Law, Feminist Legal Theory, and Law and Literature at Osgoode Hall Law School, York University.

Thanks so much to Kate for sharing her process and inspiration behind the design of her poetry collection The Bones Are There, available now on All Lit Up.

May 3, 2016
Beautiful Books: Journey to Plunderland