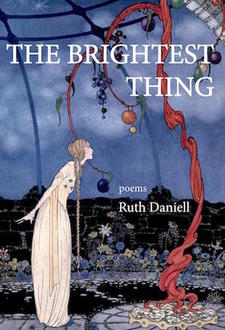 In this dark but hopeful collection The Brightest Thing (Caitlin Press), poet Ruth Daniell takes an honest look at love, relationships and the fairy-tale notion of "happily-ever-after" from a modern day perspective. We sat down with Ruth to talk more about this rad collection and how learning about poetry from a young age has helped to breathe life into its importance for her now as an adult.

ALU: Tell us about your collection.

Ruth Daniell: Quite simply,  The Brightest Thing is a collection of poems about love. The book tells the story of a young woman who is raped by her first boyfriend and her struggle afterwards to navigate her fairy tale expectations of romantic love. This contemporary story of hurt and healing is paired with poems that give voice to silenced princesses from fairy tales—including Rapunzel, Donkeyskin, The Little Mermaid’s sister and the princess who feels the pea beneath two hundred mattresses. Although the collection doesn’t shy away from some of the messiest, darkest aspects of fairy tales and of human life, ultimately the poems search for hope and light—and find it.

I think, for me, one of the most important goals of the book is to deal honestly with the pursuit of “happily every after,” which can be incredibly difficult and even harmful. The book portrays the aftermath of sexual violence and the lasting impact of trauma—the contemporary speaker, for example, is still haunted by her sexual assault years later even when in a safe, healthy, committed relationship with a compassionate partner. (And the Little Mermaid’s sister is still grieving years after losing her sister to a false idea of true love.) However, the book also visualizes the very real, very positive possibilities of love. It engages with the idea of community: because of our ages-old focus on pursuing a “happily ever after” we have a tendency to privilege romantic love over all other kinds of love, but it’s not just the love of romantic partners that can be important, nourishing, healing and darned-right-wonderful. The book seeks to elevate and celebrate the love between friends, siblings, parents and children. I use fairy tales as a way to engage in conversation about true love: how can we find it, where can we find it, what can it do? We don’t need magic if we have each other and we hold each other well, if we listen with tenderness and attention.

RD: My poems usually begin with an image or phrase, and then I sit down and attend to the heart of it. I don’t think that the process for beginning a poem has really changed for me, except perhaps a greater understanding of the use of form, of white space, of paying attention to how close to sentimentality I can get (which is, usually, very close). When I first get an idea—that first image or phrase—I write notes in longhand in a little black leather notebook. Then at my next opportunity I sit down at my desk and I type out the first full draft, usually speaking the poem aloud as I go, too, to see that it not only works on the page but also on the ear.

RD: I’ve loved poetry as long as I can remember; being read to and reading poems as a child is where it all started for me. I was also a speech arts student—now I’m a speech arts teacher—and so I regularly memorized and performed poetry when I was a child and all the way through my teenage years. I think that learning about poetry from a young age—reading such a wide range of it, from classic to contemporary—really made me believe that it is something exciting and alive. And something that still has an audience. It’s worth paying attention to.

RD: Living my life with and near others, those dear to me and those I don’t know, and noticing the very many small beautiful things of our world. And reading. Reading other writers’ work is extremely nourishing to me.

If you had one superpower, what would it be? Could you describe it in a haiku?

I want to listen
to those who speak or cannot
& then understand.

A Poem from The Brightest Thing

There is a German version of “Bluebeard”
in which the bride discovers the room
of disembodied limbs and white faces,
and she recognizes them as her lost sisters.

and tricks him into believing her compliant
while she secretly sews her sisters
back to life; at the end of the story the bride
not only lives but she rescues the women

who usually stay in that terrible locked room.
I would like to have that power.
To walk away from harm but also
to help mend those whose stories are so much

more grim than my own. I loved a girl from high school
who went missing for two years
while I was off at university falling in love
with feminism and an intelligent man

with beautiful eyebrows. She had gone away
with a man much older than her who
promised her a house and a marriage
and babies—the happily ever after

she and I had dreamed up during our sleepovers
of curling irons and nail polish
and the feeling that there was something faintly
dangerous about wanting sex. This man

did not deliver. Nothing was as it appeared—
not the houses or the cars with lapsed payments
and fraudulent leases or his declared intention
to love her gently and with grand gestures.

In the fairy tale, the evil man is a sorcerer
who only has to touch a beautiful girl
to compel her to jump into his basket
so he can carry her to his house glistening

with gold and silver and a basin of blood.
At first, amongst such riches, each woman
must believe she has everything she could want.
At first she must be happy.

I do not know for how long my friend
believed in the life that older man gave her,
each new city, new start, new debt,
new ways of being touched and being hungry.

The bride in the fairy tale smuggles her sisters
out of the terrible shimmering house
and instead of preparing her husband’s supper
she dips herself into a barrel of honey,

cuts open a bed and rolls in the feathers
until she looks like a magnificent bird.
It is impossible to recognize her.
She does not need wings to walk out

of that house and come back home.
I do not know how she knows this
or why it is true for her
and not for so many others. 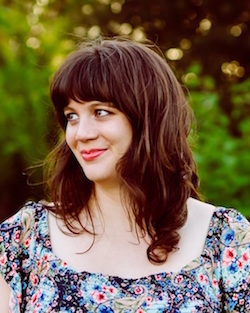 Ruth Daniell is an award-winning writer whose poems have appeared in Arc Poetry Magazine, Grain, Room magazine, Qwerty, the Antigonish Review and Event. The recipient of the 2013 Young Buck Poetry Prize with CV2 and the winner of the 2016 Nick Blatchford Occasional Verse Contest with The New Quarterly, Daniell is also the editor of Boobs: Women Explore What It Means to Have Breasts (Caitlin Press, 2016) and the author of The Brightest Thing (Caitlin Press, 2019). She holds a bachelor of arts degree (honours) in English literature and writing from the University of Victoria and a master of fine arts in creative writing from the University of British Columbia. She lives with her family in Kelowna, BC.

During the month of April, you can buy  The Brightest Thing as well as  any of our featured Poetry Grrrowl books for 15% off (+ we'll send you a stack of our exclusive temporary tattoos and stickers to show off your woman pride!)

BONUS: Test your knowledge of all the rad women of poetry with our  Poetry Grrrowl quiz! 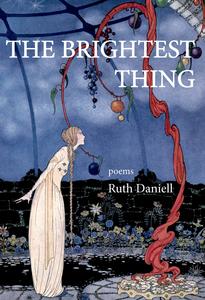 In Review: The Week of March 2nd