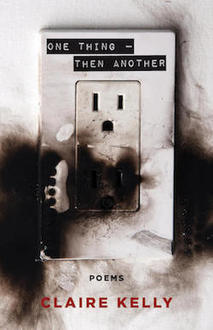 In her collection One Thing – Then Another (ECW Press), Claire Kelly explores the feelings that come with moving across the country. From the major shift in environment and economics to the mind-boggling vastness of Canada, Claire shares more on how her own experience moving from New Brunswick to Alberta has influenced the collection and why she's hesitant to think too much about why she writes.

Claire Kelly: My collection looks at a move from Fredericton, NB, to Edmonton, AB. It was my first move that was not school-related, though it was my second move across the country (or across part of the country), the first being from Ajax, ON, to Fredericton. Without school, with its built-in introductions and groups of people with similar interests, and the fact we knew no one in Edmonton, this second move was jarring. People are expected to relocate great distances for work and education nowadays, often multiple times, and I wanted to represent how that feels. There were also the intense differences in environment: the Maritime damp to the Western aridity; hills and flatness; even the wind felt different, steadier, less gusty. And differences in economics; we did not have much money the last few years in Fredericton and were often surrounded by others who did not have much money. Alberta is plain richer, with increased opportunities that come from being richer, and that felt odd after scrimping and making difficult money decisions. All this was in the back of my mind while crafting the poems in One Thing – Then Another. This is a silly-big country, sublimely big even, and my brain does not contain its vastness very easily, if at all.

CK: I used to write a lot in class to help me pay attention. That does not sound right, I know, but it was the case. My writing process now depends on whether I have an idea for a poem or whether I just feel like playing with language. Right now I am working on a poem using Wikipedia entries for classic gothic books: Frankenstein, Dracula, The Strange Case of Dr Jekyll and Mr Hyde. Having an idea means sitting down and working on it. Often though, I just get a line with a good cadence in my head and mouth and I just see where it goes. Lately, I’ve been working on poems at work during lunch, or before work when I should be doing the dishes. The time constraint of having a half-hour to get a draft done helps me focus and then I can edit later at a less harried pace.

CK: My mum had a collection of poetry that I clung onto when I was around thirteen. I remember reading “The Rime of the Ancient Mariner” in the bath and not necessarily getting the symbolism of the albatross, but just really liking the way the words bounced together: “slimy things did crawl with legs/Upon the slimy sea.” There was also a poem about a rabbit being caught in a snare that I can’t remember the title of or the author of because the book was confiscated from me by a teacher who did not like me reading during French lessons. He lost the book before I could get it back (or, I like to think, kept it because he liked the poems so much). From that I ended up looking into other poets. Sylvia Plath was a big one, and then I glommed onto Virginia Woolf, whose prose often reads like poetry.

CK: I have no real idea. The world is a fascinating place and words are also fascinating things and by filtering and altering what I see and experience through words I can represent that. A lot of the time I’m hesitant to look too much into why I write. I like the mystery and the magic of it. I fear that if I figure out exactly what I am doing or why I am doing it, I might get bored. The truth is that I am probably trying to avoid being bored.

CK: I think about superpowers way too much. I know this is cheating, but I wish I could turn invisible AND move things with my mind. Think of all the fun that would be. But I know that I am prone to laziness and if I could more easily move things with my mind than my limbs there is a good chance my muscles would atrophy. So it is probably a good thing that the closest thing to a superpower I have is being able to make tastes in my head while watching the food network cooking shows.

One invisible
and two telekinetic:
what fun I could have.

A Poem from One Thing – Then Another

Damn eagles think they can get away with run-on sentences because they’re so majestic.
— Martin Ainsley, Facebook, 2015

This town’s eagles have taken
to sending tenuous
text messages, their talons
tapping buttons like surly DMV workers
in a bad movie.
I blame the dusk, the squirrels,
the exhaust-stained snow.
Drab dinner near
invisible, uncatchable.

Today, as I’m returning books
to the librarian whose eyebrows
tilt like art-deco awnings,
my phone emits a dirty
guitar riff until

the symmetrical stoicism
of her face is marred as she
cocks one brow, strongly hints
I should leave.

The bird’s message:
U CAN’T MAKE BUNNY-EAR AIR QUOTES WITH YUR MITTS ON NO ONE KNOWS WHAT
URE SAYING YUV GOTTA PEEL EM OFF

As if I’m the one
who’s got razor sharps.
As if my mitts are a
pedantic pair of crows,
chasing a winter-starved
eagle away, back to the river,
squawking, Stay off our campus.
Use a semicolon.
Know your place.

And I keep my hands
covered because all I wanted
to say was that it’s impossible
for this winter to have gone on “too long.”
That time’s tactile
as a Slinky unfurling
between two six-year-olds
who just want to get it all straight.
That spring starts
when spring starts.

All of which is not worth
the effort of baring palm
and knuckle to the elements.

So I bury my hands
in my pockets. They’ve
seen their shadows. They’ll
keep a few more weeks. 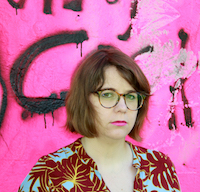 Claire Kelly's work has been published in various literary journals, including The Malahat Review, Exile Quarterly, Event, and Prism International. Her other books include the chapbook, Ur-Moth, and full-length collection Maunder (Palimpsest Press). She lives and writes in Edmonton, Alberta.

During the month of April, you can buy  One Thing – Then Another as well as  any of our featured Poetry Grrrowl books for 15% off (+ we'll send you a stack of our exclusive temporary tattoos and stickers to show off your woman pride!)

BONUS: Test your knowledge of all the rad women of poetry with our   Poetry Grrrowl quiz! 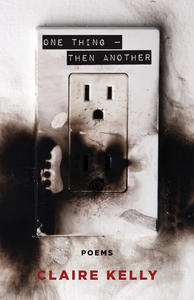 April 27, 2017
Poetry in Motion: the Prairie Honesty of Jim McLean

April 18, 2016
Under the Cover: Language as a Mooring Place in Peter Midgley's Unquiet Bones