In this expanded Canadian edition, Lyric Sexology Vol 1. (Metonymy Press), Trish Salah uses poetic sequence to inspire new and creative thought about the languages in which trans sexuality or transgender has been previously imagined. In today's poetry grrrrowl Q&A, Trish explains the influence of language in her writing process and shares the poem "Eulalia for Mother Night" from the collection.

Trish Salah:  Lyric Sexology, Vol 1 is a poetic sequence that explores different archives in which gender variance and trans possibility has been written, like historical sexology, or feminist science fiction of the 1970s and 80s. It picks up different languages in which trans sexuality or transgender has been imagined and tries to do something new, critical and curious with them. It was first published by Roof in New York in 2014, and in 2017, the lovely folks at Metonymy brought an expanded, and gorgeous Canadian edition.  Currently I’m working on Volume 2.

TS: It varies a lot depending upon the type of poem. At root though, I am always running language through my brain, and writing in dialogue with what I’m reading and thinking about. A poem begins when language catches somewhere, or simply when I sit down to it.

TS: Desire, and politics, and how weird language is.

To slow down, speed, time travel

A Poem from Lyric Sexology Vol. 1

Saint Abel bombs to be a Barcelona called Chloe
Saint Sometimes Soon to be Chloe accepted.

Someone to a Warrior Prince of England
But Erica suggested more Islands, more 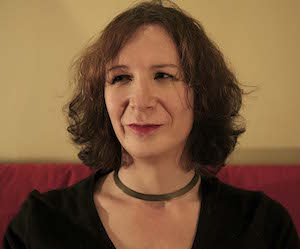 Born in Halifax, Trish Salah is the author of Wanting in Arabic (TSAR 2002, 2013) and Lyric Sexology Vol. 1 (Roof 2014, Metonymy 2017) and co-editor of special issues of Canadian Review of American Studies 35.2 (2005) and TSQ: Transgender Studies Quarterly 1.4 (2014). The 2013 edition of Wanting in Arabic won the Lambda Literary Award for Transgender Fiction. At the University of Winnipeg she organized the conferences Writing Trans Genres: Emergent Literatures and Criticism and Decolonizing and Decriminalizing Trans Genres. Currently an assistant professor of Gender Studies at Queen's University, she is a member of the editorial boards of TSQ, Eoagh, and Topia.

During the month of April, you can buy Lyric Sexology Vol. 1 as well as  any of our featured Poetry Grrrowl books for 15% off (+ we'll send you a stack of our exclusive temporary tattoos and stickers to show off your woman pride!)

BONUS: Test your knowledge of all the rad women of poetry with our  Poetry Grrrowl quiz!

Under the Cover: Dear Twin