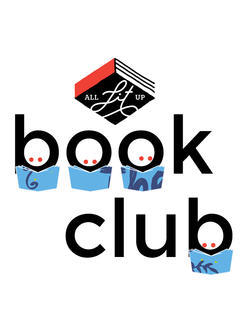 Last week we introduced you to our August book club pick, Ali Bryan's The Figgs and shared a short interview with publisher Freehand Books for a behind-the-scenes look at how the book came together. This week, we got chatty about the book and put together this handy reading guide that you can download to take to your own book clubs. Check out some of our highlights from our discussion below.

1. What makes The Figgs a novel so uniquely of this time? Discuss the phenomenon of more adult children staying home, and if the Figg children are a good example of it or outliers.

"I think the one that's most interesting to me is Vanessa. Speaking anecdotally from my own experiences, women seem to want to leave home and boys seem to want to stay home. [...] Millennials were promised something that they didn't get but also the parents were promised a retirement free of their kids. It was a really human look at that." - Lauren

"The job market is much harder than it was 20-30 years ago to break into, so kids are staying home much later into their 20s. And I think that's part of what this novel is getting at too. I don't feel that these specific [characters] are outliers. I didn't find it strange." - Mandy

"I feel that's slowly picking up, the concept of kids [staying at home]. Some of them who actually moved out, go back home." - Lubna

"I think people move home to save up money to buy a house now. I think that's becoming super common." - Barb

2. Discuss June's predicament: do you think she really wants her children to move out? Or do you think that she thinks it's what she's supposed to want?

"I think it's a little bit of both. She talks about wanting to travel and do all these things that people look forward to after they retire, but the reality is she could probably just do those things with her kids in the house or not. So she's maybe using them as an excuse." - Barb

"I think part of her wants to relinquish some responsibility. But then her identity is a full-time mom. [...] Maybe she's having some trouble shifting from being a full-time mom to a retiree." - Mandy

"I think part of her really wants to travel. Part of her feels that if [the children] don't move out and become independent she's failed them." - Lubna

"She's trying to paint this beautiful picture of [her children], and not allude to her inner feelings of panic and uncertainty and dismay." - Lauren

3. Does your opinion of June change throughout the novel, and if how so, how did it change?

"I had more affection towards her as the novel progressed. As her story unfolds, and you find out more about her background, I had a little more empathy for her." - Mandy

"At the beginning I thought she was a bit uptight. And I had trouble understanding why she was being the way she was, but as you slowly find out about her surroundings, her background, her kids and how difficult they are to be around I started feeling bad for her." - Lubna

"I liked all the way through. I liked finding out more and more things about her that explained her behaviour." - Barb

"There's even some little things about June that are the things that would make you kind of dislike another person, but are sort of a mirror about myself that make me like her more. Like, learning the ukulele. She aspirationally buys this ukulele [...] and she just never [learns it]. And it's something we can all relate to." - Lauren

4. The Figgs is full of comedic moments. What are some of your favourites?

"My favourite one has to be the time when they are trying to take a family picture on the laptop and the father doesn't know where to look and no one is ready." - Lubna

"I really liked the porch scene where Randy and June are dancing. And they come inside and the kids are like 'why are you acting so weird?'" - Mandy

"I think when June is bringing Percy upstairs from the basement and she gets stuck and she's still trying to stuff him up the stairs and her kids are at the top of the stairs shrieking with laughter..." - Barb

"There's a lot of little throwaway details that set up the comedy too. In the very first chapter when she's cleaning up the basement and sees a barf [stain] that smells like schnaps and spaghetti from prom." - Lauren

5. June and Randy are polar opposites. Do you think differences in worldview and parenting methods results in negative impact on children? If yes, how do think June and Randy overcome it?

"I feel they may have been much closer in temperament initially, but one parent always ends up having to take responsibility. I feel like probably having 20 years of screaming children around the house probably makes you appear polar than you may have been when you first got married." - Barb

"When you're on a different level emotionally you tend to deal with your kids differently. You have different solutions to problems. [...] From my personal experience, my father is someone who is very critical about things whereas my mother is more of an emotional being so she'll ask me to jump into things [...] that has made me an awfully confused person." - Lubna

"It could be confusing for children growing up in a household where two parents have very different ways of dealing with things [...] I'm not a parent, or a parenting expert, but my idea is that you should be on the same page so there's consistency." - Mandy

"I think you see in little glimpses in this book how Randy is probably a huge emotional support for the kids that June couldn't necessarily be because she was 'keeping the trains running'." - Lauren

Bonus question: The ending of the story revisits the never-ending debate of nature vs nurture. Can you discuss which way the scale tips throughout the book for each of the characters?

We didn't want to ruin the ending for those who haven't yet read The Figgs, but we had a lot of fun discussing this one! 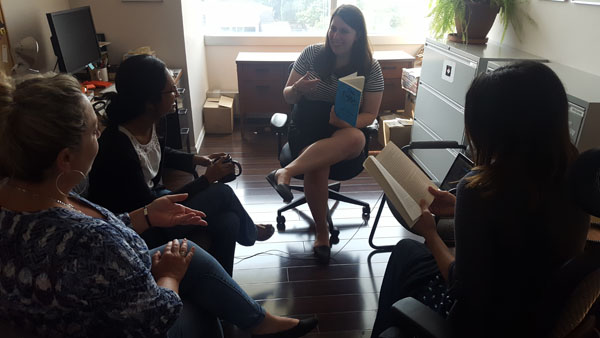 The team getting bookclubby with Ali Bryan's The Figgs.

Stayed tuned Wednesday for our interview with The Figgs author Ali Bryan. In the meantime, you can pick up a copy of the book for 15% off! Don't forget to follow us on  Facebook and  Twitter for further, impromptu discussion. Hop on the hashtag #ALUbookclub to send us comments and questions!