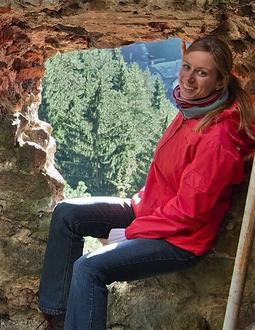 I breathe in the smell of cloves and cheap wine. Nostalgia pulls the corners of my mouth upward as I scan the small area of Petržalka’s Christmas market. Set on a square patch of concrete and enclosed with darkened high-rises, its flickering lights are like will-o'-wisps drawing me in. It is one of the less favourite markets in pre-Christmas Bratislava, Slovakia’s capital and my hometown. It’s been years since I was able to return here in winter.

The stall closest to me seems to be the source of the nostalgic fragrance. Soft light bounces off the Christmas balls strung above plastic barrels full of mulled wine. Next to the barrels steam is rising from a tub of heated oil. A man in a white apron spotted with grease drops a piece of flat dough into the scalding liquid. Immediately it starts turning golden brown. I am mesmerized by the oil simmering on the dough’s surface and by tiny droplets joining the grease stains on the man’s apron.

“And langoš for you?” he asks, apparently following my line of sight.

“No, thanks. I am waiting for a friend.” The man shrugs and submerges another langoš into oil. The smell of fried dough puts my salivary glands to work.

I look past the stall and into the darkness, trying to make out Lucia’s short frame in the sparse light of street lamps. I see her walking down an unpaved path. Lucia and I grew up as neighbours. We lived in one of the nearby concrete high-rises, our apartments separated by a thin wall. Friends as much out of convenience as mutual liking, we spent years in adventures and quarrels.

I wave. She nods, acknowledging she saw me. A turquoise ski jacket in the sea of black winter coats.

She smiles a faint smile, the light from street lamps is making her eyes sparkle. “Hi Mirka.”

“You haven’t changed much.”

I shrug and say nothing. Silence fills the air between us. Neither of us likes small talk.

We turn toward the stalls. Lucia nods at the barrels of mulled wine, while I eye the alluring display of greasy food. A Slovak Christmas market is all about grease: fried dough, slices of charred pork, pieces of bread covered in a thick layer of goose grease, neat rows of sausages next to a pile of browned onions. Heart disease tops the list of death causes in our country.

“How’s life across the Big Puddle?” Lucia breaks our silence.

“You didn’t have to leave the country for that.” She smirks.

She smiles wider and tilts her head slightly but says nothing.

“You have an accent.” She says at last.

I demand she points exactly where. “Samota,” (loneliness) she repeats the word about which I immediately become self-conscious. Those words used to only exist in English—the words I can’t pronounce properly, so instead I use synonyms or invent short descriptions: focus (concentrate), rural (not urban), jewelry (shiny things), clearly (I avoid this one altogether).

I place samota on my do-not-use list. It exemplifies one of my greatest fears. Maybe avoiding it is a good thing.

I ask Lucia about her current life. We reminisce about old times. We eat grilled pork and drink mulled wine. We don’t speak of the accent again.

My mother tongue is supposed to be a constant, a permanent fixture of my being. It is inextricably linked to my sense of identity.

About a week later I walk through the same square. It is empty now, the stalls all packed and stored away. The smell of mulled wine and grease is gone. A lone Christmas tree in the middle is the only sign that the market was once there. In daylight, the tree’s lights lack their luring effect. I hurry past it to catch a bus to the other end of the city where my family is gathering for a traditional holiday dinner. There, among plates of stewed cabbage, three kinds of well-greased meat, potato pancakes, and dumplings, my cousin tells me that I speak as if I had a potato in my mouth. I suspect he means I round my words too much, but I don’t ask him to elaborate. Instead I frown and stuff my mouth with a potato pancake. No irony intended.

The curious onset of my accent occupies my mind for the rest of the day. As my attitude changes from disbelief to shock to defiant anger, that dreaded feeling of loss sets in. Something has been taken away from me. The sense of displacement I have been unwillingly cultivating since immigrating to Canada has now grown into existential panic. My mother tongue is supposed to be a constant, a permanent fixture of my being. It is inextricably linked to my sense of identity. Suddenly I have a need to speak it with the purity that is usually upheld only by Slovak language teachers. My vowels should have a sharp edge, not curves. My t’s should be hard. Tráva, trochu, tma. Lightly touching my palate with the tip of my tongue I try to reverse twelve years of attempts to make my t’s soft, as the English language dictates.

I already have an accent—in English. It seeps out with every word I utter, no matter how short or well-rehearsed. It marks me as a foreigner and usually leads to false conclusions. Canadians tend to think I am Swedish—some have told me it’s because I am blond. As if my hair colour was a fixed characteristic only typical of one of the world’s 196 countries. If they recognize my Slavic features—broad cheekbones, large eyes, and pointy nose—many Canadians conclude I am from Russia. As if Russia is the Slavs, and the Slavs are Russia. Still, I used to welcome questions and poor guesses as a gateway to conversation. Years ago, “where are you from?” used to make me smile. Each “but your English is excellent” would inflate my ego a little more and encourage me to speak about Slovakia, a country too small to be known to many non-Europeans. A country that is not Russia.

My accents cement my place in the emigration limbo; they keep me somewhere in between, marking me as “the other” everywhere I go.

But in Slovakia, my accent is embarrassing. It is as much a sign of incompetence as willful abandonment of one of my country’s proudest achievements. The Slovak language is a corner-stone of our nationalism. It was codified in the 19th century when a wave of revolutions swept across Europe, shaking the political establishments and terrifying European monarchs. Through poems, political writings, and newspaper articles, the Slovak intelligentsia used the new language to unite the nation in their fight against Hungarian feudalism. Despite inflections, a frustrating number of cases, gendered nouns, verb conjugations, and odd spelling rules one can master only through years of dictation drills, the Slovak language is a source of national pride. To be Slovak and speak it with an accent marks me not only as an outsider but also as a deserter, one that has chosen not to belong any longer.

If I have an accent in English as well as in Slovak, who am I? Where am I heading? Where do I belong? My accents cement my place in the emigration limbo; they keep me somewhere in between, marking me as “the other” everywhere I go.

Before I leave for Canada again, I go to a local TESCO to fulfill my pre-departure ritual of buying Milka chocolate bars, Polish candy, and high-proof liquor (another source of Slovak national pride). At the check-out, a corpulent cashier gives me a curious look over her spectacles when I ask to pay with a card. “And where have you come from?” she asks as she searches my face. I shrug. It is that soft t again.

I come back to Canada in the middle of January. My Facebook wall is drowning in snippets of the world with President Trump in it. Protests. Riots. Ethnically targeted vandalism. Hateful rhetoric is flowing from right to left and left to right. The hatred has spilled north of the border. Or perhaps it’s always been there, waiting for its turn. For the first time in twelve years I wonder whether I should try hiding my accent.

Not that I think it’s entirely possible. I could probably fix my th sound. Mother, father, this, that. I tell my Canadian friends I know how to pronounce those words correctly. I just choose not to. They still mock me from time to time.

Or I could fix my mispronunciation of words like launch and lounge, ball and bowl. The pairs sound more or less the same in my ears, but I understand there is a difference. I could probably put just enough effort into enunciating that difference had I wanted to. The line between laziness and inability is at times blurry.

But then there are words I just can’t say right no matter how hard I try. My accent is always there. It is carved onto my forehead, a permanent tattoo that’s physically painless but emotionally burdensome. Flattery has a short life span. These days every time someone compliments my ability to speak English, I want to scream that not only have I lived in Canada for over twelve years but I also have two degrees from Canadian universities and a third one underway. Of course my English is excellent. But instead I just smile and thank them, wondering whether they also think that my accented English somehow makes me intellectually lesser than them.

Despite my squeaky self-esteem, I decide to wear my forehead tattoo with pride. My Slovak accent is not a sign of inferiority or incapability. It is a stamp of courage and determination. It is an imprint of myself that I leave in every foreign language I speak. It signals my willingness to learn. It is my immigration scar that fades with time but will likely never disappear. And the more it fades, the more my Slovak “otherness” comes into a sharp focus. In Slovakia, my friends laugh at this, my family cringes, and strangers sometimes take a second look. It is difficult to come to terms with the sense of loss these reactions instill in me. Much more difficult than embracing my foreignness in Canada.

But my accents celebrate my achievement. I realize I should be proud of them.

I also vow to get rid of those soft t’s.

Miriam Matejova is a writer and researcher, currently pursuing a PhD in Political Science at the University of British Columbia in Vancouver. Originally from Bratislava, Slovakia, Miriam has moved to Canada as a young adult in pursuit of higher education. Although Canada has been her home for over a decade now, Slovakia has stayed in her heart as well as in her creative writing. Her work has appeared in the Globe and Mail, Her Circle, the Inconsequential and several travel magazines. Her story “Proti Komu” (“Against Whom”) has been published in a Slovak anthology of award-winning fiction. She is also one of the contributors to Caitlin Press’  This Place A Stranger: Canadian Women Travelling Alone and the editor of Wherever I Find Myself.