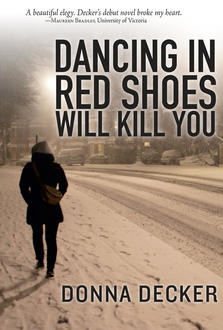 Forget-Me-Not: Dancing in Red Shoes Will Kill You

We don't need to look too far into Canada's past to find misogyny on brute display with the 1989 Montreal Massacre among the worst of them. Donna Decker's debut novel  Dancing in Red Shoes Wil Kill You (Inanna Publications) follows the imagined lives of young women leading up to that tragic day when fourteen female engineering students were murdered at l'École Polytechnique de Montréal. As history continues to repeat itself with sexist attitudes and gender-based violence, we talk to publisher Inanna Publications about the importance of Dancing in Red Shoes Will Kill You.

See more details below
Tagged: forget me not, aluneverforget, dancing in red shoes will kill you, canada150, inanna publications

Renée Knapp at Inanna Publications tells us more about what makes Donna Decker's novel so relevant.

ALU: What brought you to publish Dancing in Red Shoes Will Kill You?

RK: Dancing in Red Shoes Will Kill You arrived as a regular, unsolicited manuscript but, surprisingly, was written by an American writer/academic. Inanna had never published a monograph authored by an American citizen before, but the manuscript was impossible to turn down because of its topic: a compelling retelling of the deadly 1989 tragedy at l’École Polytechnique de l’Université de Montréal, and the events leading up to it. A number of years ago, author Donna Decker was doing research for her dissertation on 19th century feminist novelists when she stumbled on a reference to the Montreal Massacre, which, she was shocked to discover, she had never heard about. When she could find no books that told the full story, she applied for grants to travel to Montreal to investigate. She contacted the devastated family of one of the victims, and after many months of research and interviews, wrote this gripping literary exploration of the societal impact of misogyny. Donna searched a long time for a press willing to publish the book. Luckily, she found Inanna online in her search for feminist publishers. She felt the book fit perfectly with our mandate to publish “smart books for people who want to read and think about real women's lives." Our Editorial Board agreed. The rest is history.

RK: This story isn’t a new one. Women and girls continue to experience gender-based violence on a daily basis in this country (and all countries). Canada, in particular, has a dark legacy of thousands of missing and murdered Indigenous women. And it’s appalling that still today, according to the United Nations, one in three women worldwide has experienced physical or sexual violence. One in three.

What makes the December 6th Montreal Massacre significant for Canadian history is the fact that it was an irrefutable hate crime targeting women, specifically, feminists. The killer’s suicide note explicitly blamed feminists for ruining his life. He perceived women pursuing engineering studies as undeserving feminist usurpers of men’s education and career paths. Equally appalling was the way the media and the general public seemed to agree with this sentiment, as evidenced by talk radio in the days after the massacre (some of which is also explored in this book). Countless men called in to say they admired the killer for having “the guts” to do this to “feminists.”

Donna Decker’s fictionalized account of the Montreal Massacre contributes to the national conversation about violence against women and girls in a unique, accessible, literary format. The author committed to telling this horrific story from the perspective of the women, not the killer, not the haters. What was it like to be a female engineering student in 1989? What was it like to have your sister or your daughter go to school and never come home? These were the stories that Decker wanted to hear, so she wrote them. Most other work on this subject appears in the form of journalistic articles and scholarly books, and espouses the point of view of the killer. Shockingly, there are still many people in Canada (and beyond) who aren’t familiar with the events of December 6, 1989. This literary work keeps the story front and centre, refusing to relegate it to the history books. Through the braided narratives of three young women, the novel bears witness to the infamous crime, and at the same time, explores a parallel story of misogyny on campus in Kingston, Ontario;  a "No Means Yes" campaign and the insidious sexual harassment of Canadian female students across the country. Decker effectively explores the sexist, misogynistic cultural climate of 1980s Canada, but in its telling, we come to understand that things aren’t really that different today.  In Canada, and around the world, women and girls are at risk daily for gender-based violence. Now in its third printing, Dancing in Red Shoes Will Kill You continues to reach new audiences, and insists that we always remember.

December 6 has been designated as the National Day of Remembrance and Action on Violence against Women in Canada. Established in 1991 by the Parliament of Canada, this day marks the anniversary of the murders in 1989 of fourteen young women at l'École Polytechnique de Montréal. As this novel reminds us, they died because they were women.

We must never forget:

Thanks to Renée at Inanna Publications for answering our questions about Dancing in Red Shoes Will Kill You. Did you know that you get a free 2017 poster calendar if you buy a copy of the novel? 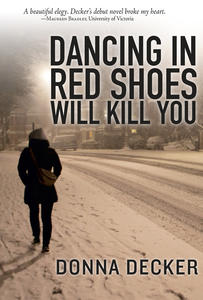 Dancing in Red Shoes Will Kill You

In Review: The Week of January 23rd

January 9, 2017
Jules' Tools for Change: Dancing in Red Shoes Will Kill You; an Interview with Donna Decker