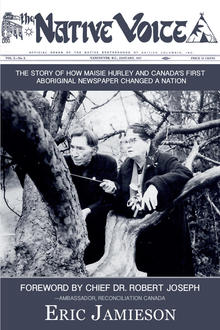 The Wales-born Maisie Hurley launched the Indigenous-focused newspaper The Native Voice in December 1946, implored by Haida Elder Alfred Adams. He saw how she had supported Indigenous people living in BC in the legal sphere, and thought she could lend that tenacity in a media space, too. With the backing of the Native Brotherhood of British Columbia that Adams had founded, Hurley’s paper quickly gained a following for both Indigenous and settler readers across Canada and the United States, for its shrewd and incisive reporting, and by turns biting and tongue-in-cheek editorial. Caitlin Press has released a history of the paper by Eric Jamieson, and for a continued celebration of yesterday’s National Aboriginal Day, we’re recounting five stories broken by The Native Voice.

An early endeavour of the Voice was monitoring the increased enfranchisement and benefits granted to (certain) immigrant groups while Indigenous populations were left without. In just its second issue (January 1947), Maisie railed against the Federal Government’s declaration that “all people residing in Canada regardless of their birthplace, foreign or British, are entitled by law to call themselves Canadian,” writing a scathing, all-caps-inflected editorial ending with “under Canadian laws INDIANS ARE NOT PEOPLE.” Her early advocating in this regard galvanized and unified efforts from disparate Nations, and articles from the paper started to get reprinted in the mainstream provincial and national papers.

Repeated calls for revisions to the Indian Act, which then prohibited freedoms like the right to possess and drink alcohol (a law that was fervently enforced), became a rightful mainstay of the paper.

2. The Indigenous Vote, and the Election of Frank Calder 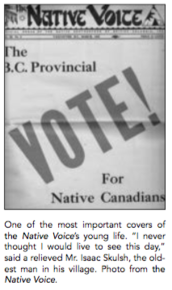 In March 1949, the Voice scrambled to put together a cover announcing a massive achievement in Indigenous rights in British Columbia – Indigenous people were given the provincial vote. Of the vote, Maisie wrote: “This gaining of the vote has been so unexpected and sudden it leaves many bewildered and in many cases suspicious, fearing for the safety of their rights. There is need for careful instruction and enlightenment as to the benefits of their new citizenship. We are all standing by them, respecting, loving and ready to help to the end.”

In the July elections of that same year, Frank Calder became the first Indigenous person to hold political office in a Canadian governing body, as a representative for the CCF (now NDP). (For a book on Frank Calder, check out He Moved a Mountain from Ronsdale Press).

Later, the Voice would also celebrate the gain of the Federal vote in 1960.

Another early venture of The Native Voice was its reporting on the deplorable conditions in state- and church-operated residential schools, first in the April 1947 issue. Evidence of abuse and neglect, including starvation, began to make their way to a special joint committee of the Senate and House of Commons, and the Voice reported on every instance, nation-wide. Given their expanding reach, the Voice’s issue shone an early spotlight on this harrowing, ongoing chapter of Canadian history.

The Native Voice had long advocated for Indigenous peoples involved in treaty disputes. In November 1960, for example, the Voice watched over the Kitwanga First Nation land dispute and called for: “a full judicial inquiry into all aboriginal rights, including social assistance, fishing rights, land infringements by the provincial government and logging companies. We’re getting sick of it all.”

By February 1961, it was clear that there was a larger issue at stake: that much of the “treaty disputes” in British Columbia weren’t based in any existing treaties – settlers in BC had just taken over the land without any agreement, making those territories unceded. Andrew Paull, then-president of the Grand Council of the North American Brotherhood and writing for the Voice, said: “The province has only bought a few parcels of land from the Indians... This includes land at Sooke, Saanich, Nanaimo, Puntledge and Rupert... We were never conquered and the government has never met the Indians in council for a discussion of native title to the lands of BC.”

As much as The Native Voice dealt in serious reporting, they also had a uniquely humourous take on other political goings-on. While a coalition government was forming in the BC Legislature, the Voice wrote a satirical piece declaring the government dissolved and seized by the head of the Native Brotherhood, Chief William Scow. The piece stated that “Whites will be guaranteed freedom of worship, of the press, of speech, and from want. There will be no discrimination; white wards will get the same treatment Indian wards have received. And for white property taken over, compensation will be paid ‘at some future date... at the discretion of the native government... with some provisions.’”

Made a lifetime member of the Native Brotherhood and a champion of Indigenous rights, Maisie Hurley died in 1964. The Native Voice was carried on first by her daughter, then many others, before ceasing publication.

Thanks to Michael at Caitlin Press for providing us with a copy of The Native Voice for this post. For more Indigenous reads, click here. 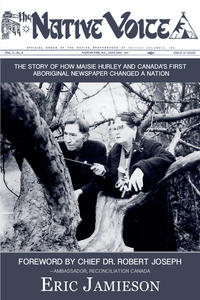 July 4, 2017
Jules' Tools for Social Change: In This Together: interviews with anthology contributors