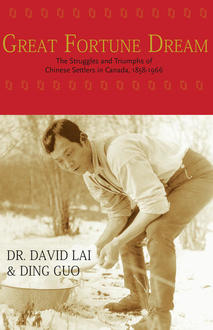 As Canadians celebrate Asian Heritage Month across the country, we've turned our eye to the past. Specifically to Great Fortune Dream: The Struggles and Triumphs of Chinese Settlers in Canada, 1858 - 1966 by Ding Guo & David Chuenyan Lai (Caitlin Press), which follows the history of Chinese migration and life in Canada, according to the four periods of Canada's policies on Chinese immigration. Caitlin Press and the authors share below some historical images and excerpts from the book.

As Canadians celebrate Asian Heritage Month across the country, we've turned our eye to the past. Specifically to Great Fortune Dream: The Struggles and Triumphs of Chinese Settlers in Canada, 1858 - 1966 by Ding Guo & David Chuenyan Lai (Caitlin Press), which follows the history of Chinese migration and life in Canada, according to the four periods of Canada's policies on Chinese immigration. Caitlin Press and the authors share below some historical images and excerpts from the book.

The Chinese people today represent the largest ethnic group in the world. The Chinese are also among the largest groups of migrants. In the early years of the twenty-first century, it is estimated that there are between forty-five and sixty million ethnic Chinese people living in 150 countries outside of China, Taiwan, Hong Kong, and Macau. Although Chinese emigration to the outside world dates back more than two thousand years, it was only in the middle of the nineteenth century that mass migration of the Chinese began. This mass migration in the years from about 1850 to 1950 has come to be known as the Chinese diaspora—the dispersion of the Chinese from their homeland. Some of these migrating Chinese came to Canada; in 1961, there were fifty-eight thousand Chinese people living in Canada, and today more than 1.5 million people with Chinese ancestry make Canada their home. 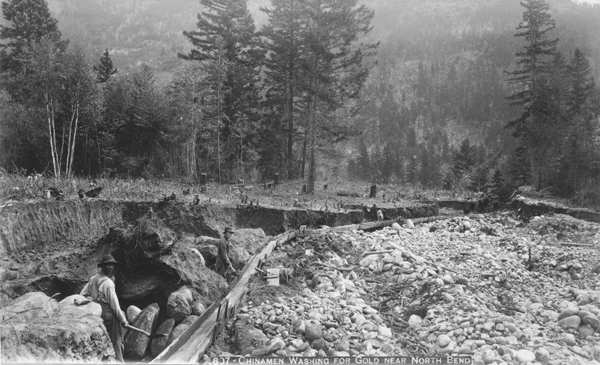 Most of the Chinese gold seekers were young men, either unmarried or having left their wives and families in China. They worked long hours every day on the gold-bearing sandbars in the rivers. Sometimes, they had to remove rocks lying on top of the sand, which they piled neatly on top of each other. The other miners called the piles of rocks “Chinaman’s walls” and they became significant landmarks identifying Chinese mining sites.

Towards the end of the gold rush period, some Chinese miners in the Interior had saved enough money to buy mining companies owned by non-Chinese people. By 1875, there were more than thirty Chinese-owned gold-mining companies in the Cariboo. The four largest companies—Quong Lee, Dang Sing Dang, Sing Dang, and Loo Gee Wing—had an average annual yield of gold sand worth three hundred thousand dollars. 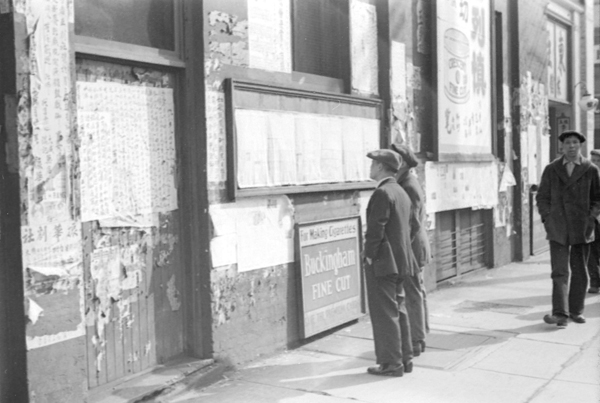 Newspapers such as the Chinese Times (Vancouver) and the New Republic Chinese Daily News (Victoria) were a major source of information for the Chinese community. City of Vancouver Archives, CVA 260-246. Photographer James Crookhall.

In the early Chinese communities, newspapers also played an important cultural role. Since most of the Chinese did not understand English, they could read only Chinese-language newspapers. The newspapers provided local information as well as political news from China. Most papers were strongly partisan and actively encouraged the Chinese in Canada to join whichever political movement in China the particular newspaper favoured. They played a key role in promoting particular political agendas, keeping information flowing from China that enabled the Chinese in Canada to continue to play a political role in their home country. They also provided basic information and distributed local news that the Chinese community needed to thrive in Canada.

The Chinese in Canada did not have their own Chinese-language newspaper in the nineteenth century, so readers subscribed to Hua Yam Yat Po, published in San Francisco. In August 1903, the Chinese Empire Reform Association began to publish Jih Hsin Pao (known in English as the Chinese Reform Gazette), which advocated for the establishment of a constitutional monarchy in China. This was the first Chinese-published newspaper in Canada and continued until 1911, when the empire was replaced by the republic. 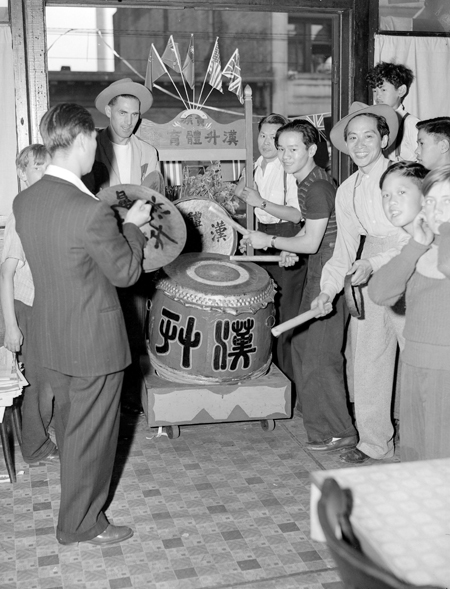 Full-scale war broke out in 1937 when Japan invaded China, initiating a Sino-Japanese war that would not come to an end till World War II was over and the Emperor of Japan surrendered to the Allies on September 2, 1945, which became known as VJ day, for Victory over Japan. Overseas Chinese people around the world united to resist the Japanese and support the anti-Japanese war efforts in China. The Chinese in Canada were no exception. 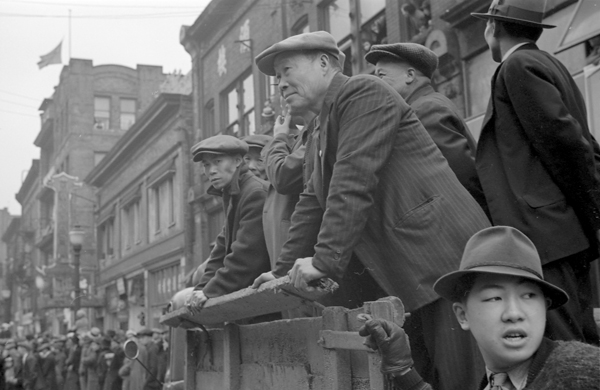 After World War I ended, economic depression gripped Europe, and thousands of Europeans, even from former enemy states like Germany and Italy, emigrated to North America in search of a better life. The influx of European immigrants in the postwar period, compounded by the return of thousands of Canadian veterans seeking work, aggravated Canada’s financial difficulties. As had been the case after the railway was completed in 1885, the Chinese were thought to be taking jobs away from white people, and veterans’ organizations and trade unions once again complained vigorously that “Orientals” were taking jobs that should belong to their members. White veterans demanded that they replace Asian workers, and labour leaders called for an end to immigration from Asia. Politicians in British Columbia supported the demand for a ban on Chinese immigration, and Premier Richard McBride was quoted saying, “We stand for a white British Columbia, a white land, and a white Empire.”

Not only were there calls for an end to Chinese immigration, but the Chinese already in Canada were also denied the right to vote. In 1920, in response to pressure from BC, Canada’s electoral law was revised and a new clause was inserted into the Dominion Elections Act stating that people disenfranchised by a province “for reasons of race” would also be unable to vote federally. This clause primarily affected the large Chinese population in British Columbia, where they were prohibited from voting provincially and municipally. Saskatchewan also denied voting rights to the Chinese, but there was only a small population of Chinese people in Saskatchewan at that time. Thus, because of the distribution of the population, the Chinese were effectively prevented from voting federally after 1920. 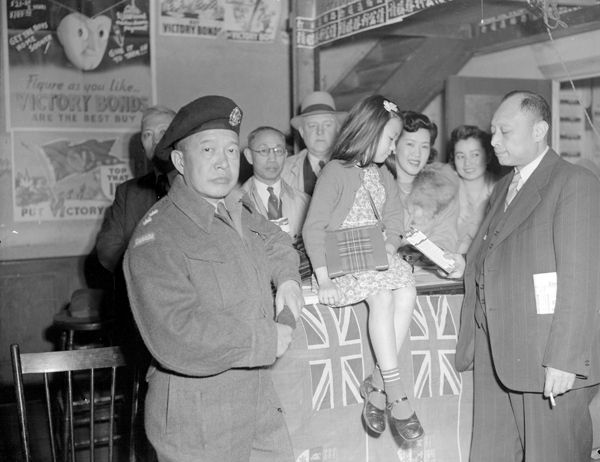 On December 7, 1941, Japan attacked Pearl Harbor, ushering in the Pacific War. This attack changed the status of Asian Canadians, including that of Chinese Canadians, as Canada followed America—both countries allied with China—in declaring war against Japan. In the early stages of the Pacific War, Japanese aggression in Southeast Asia put Britain, then fighting a two-front war in Europe and Asia, in sore need of reinforcements. The British War Office consequently asked Canada to extend recruitment to Asian soldiers to serve in the Pacific theatre, in part because of their knowledge of Asian languages and their familiarity with the culture. Opinions on the advisedness of this change in policy varied at the top levels of the Royal Canadian Air Force, the Royal Canadian Navy, and the Canadian Army, but eventually all three branches of the military accepted Chinese recruits, and between five and six hundred Chinese Canadians served in the Canadian forces on land, at sea, and in the air.

The Chinese communities in Canada also contributed to the federal Victory Bond fundraising initiative. Victory Bonds were issued by the Canadian government to help fund Canada’s military expenses during World War II. The War Finance Committee issued nine series of Victory Bonds between 1941 and 1945, promoting them broadly […] In total, the Chinese across Canada bought Victory Bonds worth over ten million dollars, thereby earning respect from outside their community: in April 1943, the director of the War Finance Committee wrote a letter to the Chinese community, saying, “We appreciate the support provided by Chinese here in Canada and deeply admire the mighty generosity of your country and people.”

Thank you to Caitlin Press, especially Jakelene Plan, for putting this together for us! If you're looking for more interesting stories by talented Asian Canadians, check out our book list.