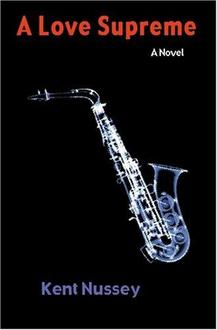 If there's a lonelier specimen than the jazz fiend, I've yet to encounter it. Alone with stacks of vinyl, or embarking on yet another solo expedition to the record store to dig deep in the crates in search of ever more obscure treasure, the jazz fiend keeps strange hours, and rarely seeks company. Kent Nussey's novel A Love Supreme is an examination of that very loneliness, and its specific effects on a man named Omar Snow.

If there's a lonelier specimen than the jazz fiend, I've yet to encounter it. Alone with stacks of vinyl, or embarking on yet another solo expedition to the record store to dig deep in the crates in search of ever more obscure treasure, the jazz fiend keeps strange hours, and rarely seeks company.

Please know that I offer this from a place of both affection and reasonable familiarity: I spent several years associated with community radio, the sometimes-host of a weekly late-night program called “Now's the Time”—named after a Charlie Parker tune—playing records by musicians who'd been dead for decades, memorizing band line-ups from sleeve notes, interviewing musicians. I listened, collected, dug in those crates. I read Richard Cook's and Brian Morton's Penguin Guide to Jazz for both reference and pleasure.

My overwhelming memory of my time in radio is coloured by the sense that I, in that dimly lit studio, playing those records and CDs, weighing the relative merits of this drummer vs. that, and hard bop vs. West Coast jazz, was talking to a very tiny audience, or possibly to no audience at all. 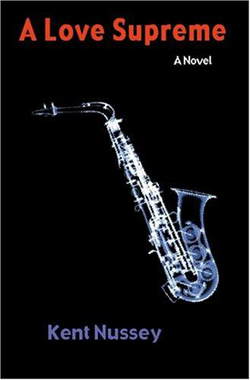 It was reclusive, arcane, and unmistakably nerdy, but the harrowing truth is that I miss it. The larger point, though, at least as concerns this essay, is that particular sense of isolation and loneliness that can be both caused and nurtured—if also perfectly soundtracked—by jazz.

Kent Nussey's novel A Love Supreme is an examination of that very loneliness, and its specific effects on a man named Omar Snow. Snow is a music writer who has left his job, “sold his car, his computer, and his fax machine to buy the time he needed” to power through his current project: a book about the jazz musicians Thelonious Monk, Charles Mingus, and John Coltrane.

Snow's book is initially meant to be a piece of straight biographical reportage of his subjects, but he soon realizes it must be more than that; it morphs into “an increasingly metaphysical treatment of their quests into the realms of mystery and wonder, realms that were hard to enter by way of mere logic and critical prose.” Omar is down the rabbit hole.

Nussey's choice of those three artists—Monk, Mingus, and Coltrane—as the focus of Snow's scholarship is no accident; all three are symbols of the very dramatic change which occurred in jazz in the middle of the twentieth century, creating an atmosphere of vacuum-sealed studiousness which allowed Snow, and people like the listeners of “Now's the Time,” and me, to delve into what would become a largely solitary pursuit.

Jazz—as originally conceived and practiced—was a social music, made for dancing, for community. That continued through the swing era; all that changed was the size and racial makeup of the audience. A shift began in the 1940s; the revolution has a lot of starting points, but the most famous and influential was at Minton's Playhouse in Harlem, where a small group of working players, including Monk and Mingus, began pushing the form's boundaries during late-night jam sessions, resulting in the development of a fast, technically complex, and indisputably modern form: bebop.

Saxophonist Charlie Parker, one of the most important figures in the development of bop, was more likely to reference modern composers like Igor Stravinsky than jazz pioneers such as Louis Armstrong. Jazz, or at least its avant-garde, evolved into a music that refused to do what the listener might expect it to; melody was beside the point. Improvisation, dissonance, silence, and cacophony were integral. Jazz turned its back—sometimes literally—on its audience, and began consciously interacting with modernity, grafting onto its already present reliance on technical dexterity the rigour and self-seriousness of an academic discipline.

It left the dance hall and, over the course of a couple of decades, entered the academy. It became, by virtue of its highbrow aspirations, part of a larger cultural discourse, and therefore a subject of serious inquiry. Accordingly, the act of listening transformed into an intellectual—and frequently solitary—pursuit. 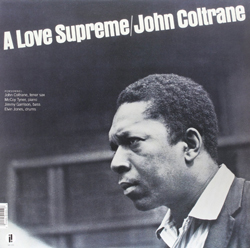 It's into this world that Omar Snow fictionally enters, into a hermetic, ascetic existence, which is part scholarship, part worship. The study of jazz takes place in a dark scriptorium, a space given over to the utter deification of a handful of musicians. And of all the saints in that milieu, none are as venerated as John Coltrane, an artist so revered that there literally is a church in San Francisco dedicated to him.

Due to its complexity, spirituality, passion, sheer volume, and lasting impact, Coltrane's work represents an especially alluring and labyrinthine rabbit hole, the branches of which radiate outward from his most popular work: 1964's A Love Supreme, an enormously influential album which remains one of the best selling jazz records to date.

It is to all this that Nussey alludes with his title, as well as with the organization of his book, which is divided into four parts, just like Coltrane's suite. It is to Coltrane that Snow is most dedicated; Coltrane's music moves him more deeply than that of any other artist, filling Snow with a “ghostly peace.” On Coltrane's records he finds “a music that purveyed the very feeling of being alive.”

And yet Snow's monastic study of the music, and his attempt to translate it into an artifact of his own making, ultimately removes him from the world. Snow grows detached from friends. At times, he allows months to pass between instances of contact. It also estranges him from Carrie, an actor who represents possibly his only shot at romance. “It surprised Omar that he had not thought of her for so long,” writes Nussey, when Snow's involvement with his work is at its most intense.

Snow's intellectual investment is manifest as antisocial behaviour. Even when he does venture out into the world, he can be moralizing, superior, childish, prudish, and selfish, suggesting that in order to devote himself to some greater understanding, he must be either physically absent, or present, but emotionally distant. That seems to be how Snow himself understands things, anyway; of the writing of the jazz book, Nussey writes, “It was what he had instead of love.”

Snow, writes Nussey, “might go for days without leaving his house, struggling with a project for an audience so esoteric and hypothetical he dared not let himself think about it.” Flashback to me in that dim radio booth; this withdrawal from the world promises the individual only solitude and anonymity, and indeed even hardship. Snow's closeting has very real negative effects on his health, both physical and mental.

Regarding this voluntary exile from lived experience, and the toll exacted thereby, the book's epigraph is telling; taken from the Purgatory section of the Divine Comedy, it depicts Dante being led up the mountain by the poet Virgil, the pair making their slow way toward Paradise. It reads:

"Thee will I follow far as is allowed me,”
He answered; “and if smoke prevent our seeing,
Hearing shall keep us joined instead thereof.”

The passage suggests the belief that art—specifically music—can provide not only direction, but deliverance to elemental truths, even to paradise. It's a belief shared by many, whether speaking of music, or the visual arts, or literature. The cost of such deliverance, it seems generally agreed, is an estrangement from the daily affairs of the world. Said Jean Jacques Rousseau, “my habits are those of solitude and not of men.” Susan Sontag concurred: “One can never be alone enough to write,” she wrote. Ernest Hemingway told the Nobel Committee, “Writing, at its best, is a lonely life.” 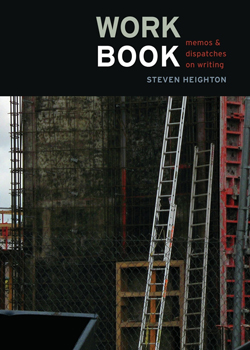 The reason for all this loneliness seems straightforward, even in-built: the work is time-consuming, by definition solitary, and requires blocking out the distractions of the unquiet world. In Work Book, his collection of “memos and dispatches on writing,” Steven Heighton writes, “I sense that the full cosmos is clamouring to get into any essay a writer begins.” Which is to say, the writer is grappling with an overwhelming amount of information, and in order to synthesize experience, they must necessarily throttle down on the number of stimuli in order to hone in on the subject at hand. Later Heighton quips that a “month of brooding can open into a year of purposeful creativity.”

And there's that sizable paradox: that in order to devote oneself to the pursuit of truths—in order to, in other words, fully engage with the world through such media—one must at least partially disengage with everyday life, giving over attention and vast swaths of time to a chosen project. The pursuit of knowledge can place the seeker in a kind of purgatory: alive, but seldom among the living.

Omar Snow is perhaps doubly damned, because he has devoted himself both to the consumption and interpretation of a lonely music, and to writing. The jazz devotee, like the writer, and for that matter the monastic scholar, eschews contact with the earth in the hopes of establishing connection to something higher, or deeper, or truer. It's the classic bargain; almost Faustian in a sense, for loneliness can mimic nothing so well as eternal pain.

Toward the end of Nussey's novel, Omar Snow permits himself company: as a long winter of seclusion and work yields to spring, he renews contact with Carrie, suggesting that Snow isn't certain about the solitary path he seems to have chosen. The vulgar and sullied world may yet offer him pleasures too great to pass up.

They meet, and under the spell of warm spring air and a few drinks, they dance to an old R&B tune he doesn't recognize—something anti-modern, and decidedly social. Snow's book is as yet unfinished, “and he still didn't know how it would end.” He is a man hovering between engagement and seclusion, between understanding the world and actually experiencing it; theory and practice. Carrie seems to offer an outstretched hand. She is the promise of re-immersion in the real, but withdrawal still beckons. Omar Snow is at a pivotal moment.

As Snow reckons with the choice presented him, the reader hopes he recalls the fuller scope of the work from which Nussey borrows for his epigraph, which tells us that great devotion might yet deliver some form of salvation, be it knowledge, or a stroke of musical genius, or a great novel, or an incisive thinkpiece. It further instructs that in order to reach that hoped for paradise, however, one must first pass through Hell.

Andrew Forbes’s work has been nominated for the Journey Prize, and has appeared in The Feathertale Review, Found Press, PRISM International, The New Quarterly, Scrivener Creative Review, The Journey Prize Stories 25, This Magazine, Hobart, The Puritan, All Lit Up, The Classical, and Vice Sports. What You Need, a collection of fiction, is available from Invisible Publishing, and The Utility of Boredom: Baseball Essays will be published in April, 2016. He lives in Peterborough, Ontario. 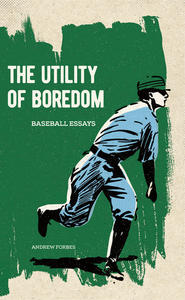 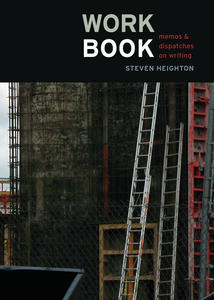 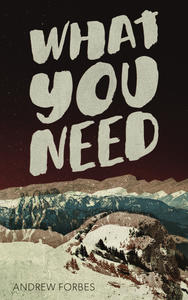 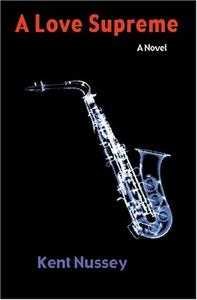