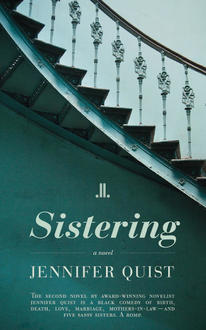 On Death, Love, and Family in Jennifer Quist’s Novels

Perhaps the only thing more intriguing than an author’s debut novel is the speculation surrounding their second book. Edmonton writer Jennifer Quist’s first novel Love Letters of the Angels of Death (published by Linda Leith Publishing in 2013) earned her critical accolades and the Lieutenant Governor of Alberta’s Emerging Artist Award in 2014. Considering this positive response, it is fair to wonder if her newest book Sistering (publishing in August of this year) is as strong as her first. The comparison of debut and sophomore novels is inexact. Comparing the two books is not a simple matter of seeing if Quist has “improved” as a writer. As often is the case, Sistering was written before Love Letters was published. However the themes of these books are too similar for comparisons not to be made.

Perhaps the only thing more intriguing than an author’s debut novel is the speculation surrounding their second book. Edmonton writer Jennifer Quist’s first novel Love Letters of the Angels of Death (published by Linda Leith Publishing in 2013) earned her critical accolades and the Lieutenant Governor of Alberta’s Emerging Artist Award in 2014. Considering this positive response, it is fair to wonder if her newest book Sistering (publishing in August of this year) is as strong as her first. The comparison of debut and sophomore novels is inexact. Comparing the two books is not a simple matter of seeing if Quist has “improved” as a writer. As often is the case, Sistering was written before Love Letters was published. However the themes of these books are too similar for comparisons not to be made. Both involve characters managing the aftermath of death—both natural and unexpected—and reevaluating their lives in its wake. Both books examine death, love, and family so intimately, but Quist manages to create two very different books. 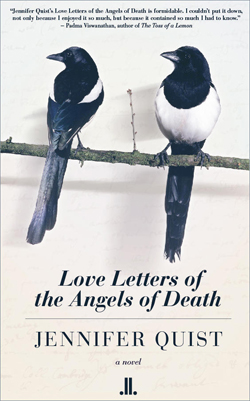 I underestimated the role death would play in both of these books. In these works, Quist uses death as both an impending source of dread and as an unseen catalyst for the development of each character. In Love Letters, death becomes Brigs and Carrie’s domain. They never seem to truly be overwhelmed or crushed by the death of a relative. Instead as the title indicates, the narrator and his wife are the angels of death. They are comfortable with the ritual of funerals and accept their roles, with gusto even, at least in Carrie's case. Their only real fear is losing each other to death. Brigs is certain he will never live without his wife and it seems she agrees; Carrie begins to plan Brigs’ funeral whenever he is late coming home, with a level of detail usually reserved for weddings. (If social media was part of this book, Carrie would no doubt be pinning hearses and mourning gowns on Pinterest.)

The sisters in Sistering do not immediately show the extreme fascination with death that Carrie does but it does not completely repulse them either. The book is very much about the living—the opening scene is of the sisters gathering to witness the birth of Tina’s sixth child. However death becomes part of each woman's life. Specifically, the deaths of their husbands’ mothers. The absence of the mothers-in-law, whether due to tragic, fantastic, even mundane circumstances, shapes the sisters’ relationships with their husbands, with their own mother, and with each other. To some degree the dead mothers-in-law impact the sisters’ very identity. After burying her mother-in-law, Heather became a mortician (the timing is a coincidence she insists). Meaghan, still unmarried, unconsciously searches for a dead mother-in-law of her own. And Suzanne’s favorite self (one of many) is “Perfect Daughter-in-Law Suzanne,” an identity that hinges on her mother-in-law being alive.

Love is central to both of Quist’s novels. In fact if it were otherwise, the narratives would be overwhelmed under the pall of the multiple deaths that fill both books. The title of Love Letters can be taken quite literally. These “letters” are one sided though. The narrator’s wife Carrie remains “you” throughout most of the book. The reader can only deduce her love for Brigs through his narrated interpretation of her words and actions. On the other hand, Brigs doe-eyed devotion cannot be escaped. Each chapter further reveals the narrator’s adoration of his wife. Traits others may see as Carrie’s faults or morbid obsessions become darling idiosyncrasies through Brigs’ eyes. While this makes for a lovely portrait of marriage, it at times flattens Carrie into a fantasy projection of his desires, rather than a multi-faceted woman. She is the kooky love interest so often portrayed in teen romance movies, but with a brood of young sons trailing her and a reaper hovering over her shoulder. Love, in Love Letters, smoothes away all imperfections instead of facing them.

The fraternal (or rather, sororal) love in Sistering allows more space for each character to be deeply flawed. Rather than gloss over their sisters’ shortcomings, the women acknowledge them with a sigh and click of the tongue. Heather, as the eldest, recognizes her sisters' carefully constructed façades and tries not to shatter them immediately. But they are inevitably shattered. In one cathartic scene, the sisters reveal truths about themselves only to realize they were never secrets at all. Full acceptance of each other leads to an exploration of radically unconditional love. The scope of this exploration expands as each woman also examines her romantic relationships. Though the sisters’ narrative voices sometimes blend together, their husbands and marriages are very distinct. Ashely’s husband Durk is arguably the least accomplished among the men, with his fondness for “cannabis and chakras.” Suzanne insists that her Troy is “not a trophy husband” but he is, by all accounts, perfect. Tina struggles to hold her tumultuous marriage together as Meaghan tries to determine if her fiancé is truly The One. Heather is the only one among them who is perfectly content. Hers is the only narrative that begins with her screaming with laughter and a defiant declaration of happiness.

As the title implies, sisterhood is an action for the women in Sistering. Large areas of their lives are defined by their role in the family. Meaghan, the youngest, and Suzanne, “the exception that proves the rule,” both make drastic choices in order to construct their identities in relation to their sisters. One character compares the sisters to famous quintuplets. Though they reject this, it is increasingly clear as the book progresses that their lives are linked despite their separate births. In one scene, Heather wonders if, just as she was the first to be born, she will be the first to die and as such has the responsibility of keeping death at bay to protect her sisters. They rebel against a linked fate to varying degrees but they do not function well on their own. Ultimately, their strength lies in their unity and by the end of the book they speak with one voice.

In contrast, Love Letters is centered more on Brigs and Carrie’s love affair than their relationship with their family. They seem to primarily keep to themselves, swooping into their families’ lives only in flashbacks to their childhood or when duty requires them to tend to the dead. Their relative isolation is an effective way to highlight their marriage but this narrative decision makes the scope of the book much smaller and limits the characters’ growth to a single relationship. 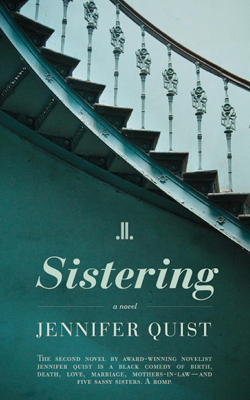 Because they have very similar themes, it is the structure and style of each book that sets them apart. Both have short, episodic chapters, but in Love Letters the chapters are more self-contained—like stand-alone vignettes that allude to Quist’s experience writing short fiction. In Sistering, the chapters fit together like scenes in a drama, each building on the previous one. Both books are in present tense, but that stylistic choice fits better in Sistering. The melodrama in Sistering lends itself well to the urgency of the present tense. Love Letters has a more introspective, almost nostalgic, tone that the past tense would have highlighted.

The most important difference is in the point of view. Love Letters has one first-person narrator, Brigs, who directly addresses “you,” his wife. While Brigs is not quite an unreliable narrator, his effusive love for “you” permeates the entire book. It is fair to think his account of events is coloured by nostalgia and affection. Sistering, while also in first person, shifts point of view among the five sisters. Each chapter is narrated by the sister who is driving the action. This gives a fuller scope of the story as each woman recounts and reacts to her sisters’ behavior. In both books, Quist changes the point of view for the last chapter. This final flourish makes the last chapter function almost like an epilogue, wrapping up all the loose ends neatly in a bow.

At their core, both of these books test the strength of relationships under the intense distress usually associated with death. To that end, I found Sistering more successful. The pace and drama of this sophomore work are akin to a modern soap opera. Each twist puts a strain on the characters until each sister reaches a snapping point. It is fascinating to anticipate how the sisters will navigate these conflicts. Their solutions are as over-the-top as the situations themselves but the emotional depth grounds the book. There is subtle charm associated with the chronicling of a love story over time as Love Letters does. But, while I wouldn’t describe it as a comedy, Sistering’s approach to the same themes makes for a thrilling read and satisfying conclusion.

Léonicka Valcius is a Toronto-based publishing professional. She blogs about various topics, including diversity in the publishing industry.

Love Letters of the Angels of Death