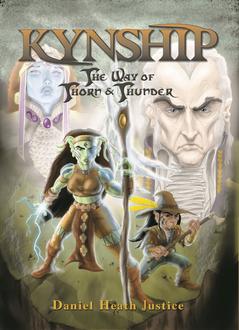 CanLit Rewind: The Way of the Thorn & Thunder series by Daniel Heath Justice

Our next CanLit Rewind selection is actually a three-fer: Daniel Heath Justice's The Way of the Thorn and Thunder fantasy series, which includes Kynship, Wyrwood, and Dreyd. Daniel Heath Justice (Cherokee Nation) is Canada Research Chair in Indigenous Literature and Expressive Culture and Chair of the First Nations Studies Program at the University of British Columbia, unceded Musqueam territory, and has previously published a study of Cherokee literature, Our Fire Survives the Storm: A Cherokee Literary History. He was able to take all of his knowledge and create a very detailed and rich world for the series.

This year marks forty years of supporting and celebrating some of Canada's finest literary presses for our parent organization, the Literary Press Group of Canada. To help celebrate, for the entire month of October All Lit Up will be highlighting books from our publishers that either helped launch a new voice in CanLit or made an impact at the press it was published with. Go on a CanLit Rewind with us to rediscover some backlist gems!

Our next CanLit Rewind selection is actually a three-fer: Daniel Heath Justice's The Way of the Thorn and Thunder fantasy series, which includes Kynship, Wyrwood, and Dreyd. Daniel Heath Justice (Cherokee Nation) is Canada Research Chair in Indigenous Literature and Expressive Culture and Chair of the First Nations Studies Program at the University of British Columbia, unceded Musqueam territory, and has previously published a study of Cherokee literature, Our Fire Survives the Storm: A Cherokee Literary History. He was able to take all of his knowledge and create a very detailed and rich world for the series. Originally published from 2005 - 2007, the story takes place in Everland a thousand years after the world of Men and the world of the Folk collided in catastrophe. The seven nations of the Folk are preparing themselves for the growing storm of the ever-encroaching Humanity. Kegedonce's managing editor, Kateri Akiwenzie-Damm, looks back on publishing the series and what it meant for the press and beyond. 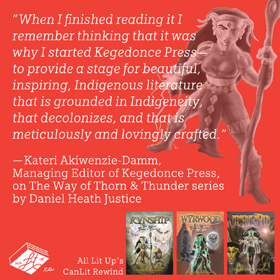 The Way of the Thorn and Thunder series is our only trilogy and our first foray into speculative fiction. We believe it is the first speculative fiction trilogy written by an Indigenous writer in North America, and, as far as we know, the world. I remember being completely astounded by the story when I read the manuscript. There were so many elements that were exciting and innovative and that resonated with me as an Indigenous reader: the powerful female warrior protagonist, the belief system underlying the Kyn, the subversion of the "boldly go where no man has gone before" tropes, the way that gender and sexuality are portrayed in such a natural and accepting way that is consistent with Indigenous cultural concepts, the power of the natural and supernatural. I felt validated and excited by all of that. I was also awed by the depth and magnitude of the world Daniel created in such incredible detail. It feels real and alive. When I finished reading it I remember thinking that it was why I started Kegedonce Press -- to provide a stage for beautiful, inspiring, Indigenous literature that is grounded in Indigeneity, that decolonizes, and that is meticulously and lovingly crafted.

Throughout the entire process of publishing the three books that comprise the series, we learned a lot. The biggest revelation was that we were so far ahead of our time. Ten years ago the literary world simply wasn't ready for Indigenous literature like this. We really believed that this trilogy would be embraced by everyone -- speculative fiction readers, Indigenous lit readers ... everyone. Because it was so unlike what we knew of, we were sure everyone was waiting for it. It was a shock to realize that, instead, it seemed that booksellers and book buyers didn't quite know what to make of it or ignored it altogether. We had to work really hard to get attention for it. We were breaking trail and it was tough going and, at times, disheartening for us and for Daniel too. It should have won awards and developed a cult following and been made into a film! It's that good. It has done very well in so many ways and has sold around the world, but there's no doubt in my mind that if it were released today, it would get a much bigger reception. 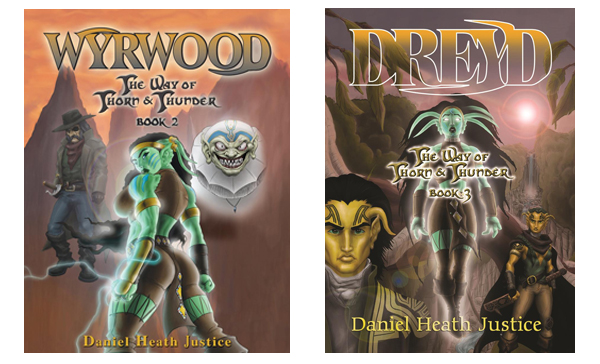 All that being said, Kegedonce still tackles projects like Daniel's series, books that challenge people's notions of Indigenous literature. We've found ourselves again and again breaking trail. It can be daunting and difficult but it makes it that much easier for those who follow so it is worth the effort. Besides, it's a sort of "extreme" publishing -- we like the challenge because it's exhilarating, and fun. You could say we're the adrenaline junkies of publishing.

More importantly though, what we are doing matters. We are helping Indigenous voices be heard, we are helping Indigenous people see themselves and their cultures represented and reflected, we are empowering our stories, aesthetics, canons, arts, languages and cultural traditions. Honestly, I don't really think of what we do as within "CanLit". Our stories, songs, oratory, poetry came first and are literally grounded in this place -- in the land and rocks and waters and beings and elements and supernatural of this place. All of that was here and alive and growing long before there was a "Canada" or "CanLit".

Thank you to Kateri and everyone at Kegedonce Press for sharing Daniel Heath Justice's series, The Way of the Thorn and Thunder, with us. Daniel's latest works are the literary manifesto, Why Indigenous Literature Matters (forthcoming from Wilfrid Laurier University Press), a study of other-than-human kinship in Indigenous literary expression, and a new dark fantasy trilogy. Catch up on the entire CanLit Rewind series here. 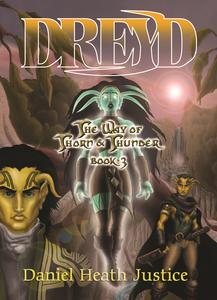 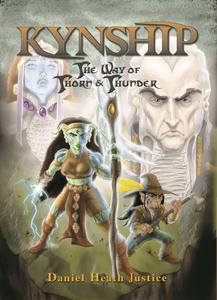 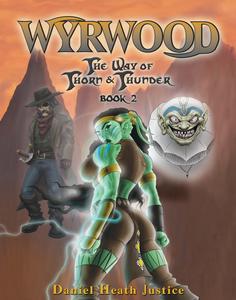 CanLit Rewind: A Peepshow with Views of the Interior: paratexts by Aislinn Hunter