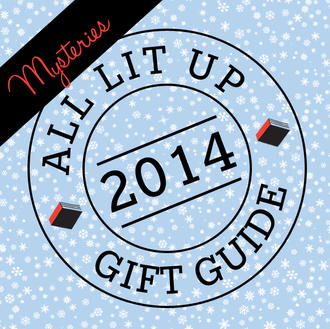 Today, crime and mystery reviewer extraordinaire Jacques Filippi gives us six of his top picks for that someone on your list whose gifts require means, motive, and opportunity.

Today, crime and mystery reviewer extraordinaire Jacques Filippi gives us six of his top picks for that someone on your list whose gifts require means, motive, and opportunity. 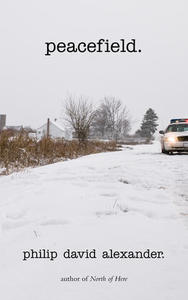 In Peacefield, Philip David Alexander brilliantly depicts how the quietness of everyday small-town life can be disturbed suddenly, and how an event that directly involves five people will indirectly affect many more.

Two cops, Grant Ambler and Arnold Strauss, are going through the usual motions of a quiet day at work, patrolling the streets of Peacefield: they stop here for coffee, say hello there to an old friend, at times they exchange banalities or talk about the problems in their personal lives, and sometimes they even daydream about the scars from their past or the uncertainty of the future: the unsolved disappearance of one’s little brother, years ago, or the upcoming birth of a first baby;  the well-being of your aging father, or the realisation that you were happier in your previous job as a postman, etc.

Suddenly, the routine and the worries are brutally pushed aside; everything is turned upside down when the two constables respond to a 911-call about a domestic dispute – with a possible gunshot. Their lives and many others will be changed forever. Imagine a shattered mirror --the town-- with its flying pieces--Ambler, Strauss, family members, friends, coworkers, and other people involved in the events of that day-- and freeze that image: Philip David Alexander goes from one glass shard to the next, examining their intimate details, their places and roles in the scheme of things, but also where they’ll end up and how they’ll continue on once they’ve fallen down, never to be the same again in a damaged puzzle with broken and missing pieces.

When the Saints Go Marching In
by Anthony Bidulka (Insomniac Press)

After eight books (and many awards) in the Russell Quant mystery series, Anthony Bidulka turns his focus on a new lead protagonist, agent Adam Saint. In the first novel of this new series, Bidulka doesn’t disappoint his readers who enjoyed following Quant in plots that took him to many different countries. Adam Saint, working with the CDRA (the Canadian Disaster Recovery Agency), doesn’t always go to locations as exotic as those Quant used to visit, but he does accumulate many Air Miles points. First, Saint is sent to Russia to investigate the suspicious death of his boss and good friend Geoffrey Kazinski; Saint then briefly comes back to Canada to deal with two other major crises in his personal life, before flying to the US, London (England), Southeast Asia, etc.

Adam Saint is a likeable character right from the start; although you quickly realise that he must be a skilled and dedicated agent, you also know that he’s a good person with flaws. Even though he’s working on a case with international repercussions, Saint can’t hide from his personal troubles and worries.

While Bidulka has created a strong protagonist that could carry a novel on his shoulders, he also had the intelligence to provide him with a very solid cast of characters –friends, coworkers, allies and enemies, and others who all add to the big picture.

You can also look for the second title in the Adam Saint series, published earlier this year: The Women of Skawa Island. 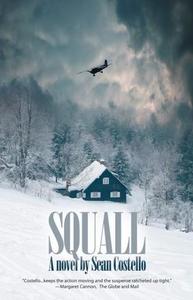 If the Coen brothers ever want to film a Fargo-style story set in Canada, Sean Costello’s Squall would be a great choice. Mixing tongue-in-cheek dark humour (and sometimes laugh-out loud funny lines and situations) with a believable and original plot, Costello pulls the reader along for a suspenseful ride.

Tom Stokes is a bush pilot who enjoys a quiet life with his wife and son. On a cold, January morning, Tom takes his Cessna to a remote cabin to do some repairs; on his way back he is surprised by a squall that forces him to do an emergency landing.

Tom finds himself in an awkward situation that involves a drug addict, his crazy girlfriend, two seriously creepy hired killers, and a few other shady characters. Tom soon realises that he might never get out of this alive, so he turns his focus on protecting his family.

One of Costello’s strengths is that he makes us care for the bad guys at the centre of the action, even though we never stop cheering for the good guys. Squall will entertain everyone looking for a suspenseful, crime novel filled with dark humour.

Costello has written a few good horror novels, plus a couple other books that were not easily categorised, but I definitely hope he’ll continue in this present vein. Crime fiction suits him well.

Cops and detectives will tell you that most lowly criminals are not very intelligent. We have some good examples of that in Dietrich Kalteis’ first crime novel.

With a cast of characters straight out of any good George Pelecanos book, or think The Wire, Vancouver-style instead of Baltimore, MD. But it could also be any place where you find screw-ups playing grown-up games (illegal ones, of course) while cops try to catch them; add to that a few good kids hanging out with the wrong crowd, parents desperately trying to keep them on the right path, and Karl Morgen, a bounty hunter who was fired and is forced to relocate from Seattle to Vancouver. Morgen’s path will again cross with Miro’s, the guy he put in prison for jumping bail but also the cause of his firing.

Kalteis writes like a seasoned pro and takes the reader through the chaotic lives of these wannabe big-shot criminals who desperately want to fit somewhere. They gang up and try to come up with the big sting that’ll ‘make’ them. At the same time, they’re all thinking up ways to get rid of the others or to get revenge on someone else. And when they have the chance to hit it big, they usually find ways to screw it up.

Dietrich Kalteis’ next novel will be published in Fall 2015. 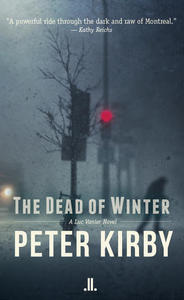 The Dead of Winter
by Peter Kirby (Linda Leith Publishing)

Not many crime novels set in Montreal have been able to realistically represent the city as only a Montrealer can see it and sense it; Peter Kirby effortlessly takes the city’s pulse and makes readers feel the life coursing through the streets, from the outskirts to the heart and back towards different neighbourhoods.

It’s Christmas Eve and five homeless people are found dead in different metro stations of the city. Inspector Luc Vanier is charged with solving the murders. To most, a case on Christmas would ruin their holiday plans; for Vanier, it is a welcome change to drag him away from his Jameson and loneliness. Divorced, his daughter in Toronto with her mother, and his son in the Canadian Army, stationed in Kandahar, Vanier had nothing much to do except work.

Five dead bodies would keep him busy for a while, but he never imagined his investigation would get so complicated, and that many people would be on his list of suspects. Peter Kirby brings the reader along with Inspector Vanier through some of Montreal’s darkest secrets, into the world of the Catholic Church, of the movers and shakers of the city’s finance district, and all the way down to the opposite end of the spectrum where life happens (and ends) in the streets, at minus 30 degrees Celsius.

The second novel in the series, Vigilante Season, was published in 2013. Look for book three, tentatively scheduled for fall 2015.

Eddie Dougherty is a young cop, in 1970s Montreal. He’s still learning the ropes, so when he gets the opportunity to help out in an investigation, he jumps on it and puts in many hours on top of his regular shifts as a street cop.

When the FLQ starts planting bombs everywhere in the city, the entire detective force is put towards working those cases. Which means that the murders of three young women and the abduction of another is not getting high priority. Dougherty, coached by veteran Detective Carpentier, will take it upon himself to chase leads around the city to try and catch the serial killer.

As Dougherty’s investigation takes him to different neighbourhoods of Montreal – on and off the island – McFetridge sharply describes different landmarks along with every detail needed to make it a realistic historical novel; however, he never falls into the trap of placing props just for the sake of trying to recreate the era. Prices of items, food venues, pubs, clothing, street life, police cars, and everything else is sparsely placed here and there.

Black Rock is not only historically accurate, it is also filled with well-defined characters who each play a role in advancing the plot. Dougherty’s relationships at work with detective Carpentier --his mentor, crime scene photographer Rozovsky, journalist Rogan, and his relationships at the family home with his aging parents, his father’s deteriorating health, with his sister who is the same age as the killer’s victims, and with his little brother who is trying to stay out of trouble, all help in defining him as well as he helps defining them.

This is one of the best Canadian crime fiction novels of the past ten years, and John McFetridge is one of our greatest writers in the genre. He has published four books in his Toronto series, and the next Eddie Dougherty novel, A Little More Free, will be published in fall 2015.

Jacques Filippi is the co-founder of the QuebeCrime Writers Festival, and the founding editor of the popular crime blog The House of Crime and Myster y. 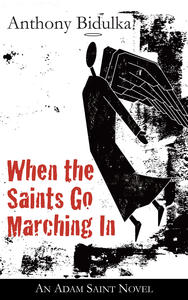 When the Saints Go Marching In

December 19, 2014 by Steph VanderMeulen
Gift Guide Week: Kids and YA