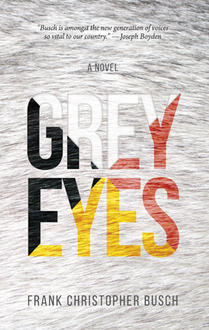 Get to Know Them First: Grey Eyes and Frank Christopher Busch

As a part of our month-long series,  Get to Know Them First, today we feature  Grey Eyes, by Frank Christopher Busch. The novel was described by the Globe and Mail as: “…at once an intricate portrait of pre-contact life and a suspenseful page-turner that builds towards a dramatic and moving finish. As a novel it is a success — one that may benefit, and certainly entertain, Indigenous and non-Indigenous Canadians both.”

Read on to learn more about this unique and important book from the author, Frank Christopher Busch, and from his publisher, Roseway.

As a part of our month-long series, Get to Know Them First, today we feature  Grey Eyes, by Frank Christopher Busch. The novel was described by the Globe and Mail as: “…at once an intricate portrait of pre-contact life and a suspenseful page-turner that builds towards a dramatic and moving finish. As a novel it is a success — one that may benefit, and certainly entertain, Indigenous and non-Indigenous Canadians both.”

Read on to learn more about this unique and important book from the author, Frank Christopher Busch, and from his publisher, Roseway. 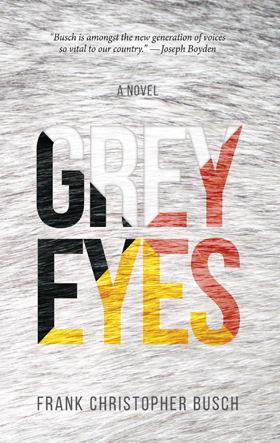 In a world without time and steeped in ceremony and magic, walks a chosen few who hold an ancient power: the Grey Eyes. True stewards of the land, the Grey Eyes use their magic to maintain harmony and keep evil at bay. With only one elderly Grey-Eye left in the village of the Nehiyawak, the birth of a new Grey-Eyed boy promises a renewed line of defence against their only foe: the menacing Red-Eyes, whose name is rarely spoken but whose presence is ever felt. While the birth of the Grey-Eyed boy offers the clan much-needed protection, it also initiates a struggle for power that threatens to rip the clan apart, leaving them defenceless against the their sworn enemy. The responsibility of restoring balance and harmony, the only way to keep the Nehiyawak safe, is thrust upon a boy’s slender shoulders. What powers will he have, and can he protect the clan from the evil of the Red Eyes?

Frank Christopher Busch is a member of the Nisichawayasihk Cree Nation and grew up in northern Manitoba. He has spent his professional life working with First Nations businesses, non-profits and governments at the band, regional tribal council, provincial, national and international levels. He lives in Westbank First Nation, British Columbia.

Tell us about the first time you realized you wanted to be a writer.
It was completely unintentional. When my first son was born, I suddenly became aware of my own mortality. I wanted to record what little knowledge and experience I had in order to pass it on to him. I was driving long distances for work at the time and started recording my voice as I did so. It eventually ballooned into a series of novels, of which “Grey Eyes” is the first.

What are the first five words that come to mind when you describe your book to someone?
A friend once described the book to someone else as a “Native ‘Harry Potter’ for grown-ups”. That seems to fit well for lack of a better comparison. I suppose there are a few parallels with regards to the use of magic, though it is a simpler magical system traditionally known to First Nations people.

Do you have your outfit picked out for your first author event/launch?
I was given a suede vest with bear claw images on the front by Tammy Beauvais, a famous First Nations designer. I had purchased a suede jacket from her at a conference and ended up getting photographed in it with Don Cherry. She posted the picture to her website and must have made a few sales from it because she was very happy to see me at the next conference. I have since ordered many other items from her.

Who did you tell first that your book was being published?
My wife. We were both in shock. I had sent the submissions to several publishing houses who were willing to accept unsolicited manuscripts. It was basically just a wish in the wind that I never thought would actually come true. If I had known at the time how much work the editing process was going to be, I might have been a little less ecstatic.

What is the first book you remember reading?
The first book I read solo was an encyclopedia of mythological creatures. It was very large but had a lot of pictures and explained various creatures like trolls, brownies, dragons etc. It was a very good starting point for me as I mainly read fantasy fiction afterward and never had to wonder what a “drow” or a “chimaera” was when reading.

When was the first time you were on an airplane? Where were you going?
It was a small bush plane the first time I left the north. I believe we were going to Regina, Saskatchewan, for my father’s graduation from the RCMP training academy. It would become the first of many airplane rides throughout my lifetime. My record is currently 80 flights in one year. I am excited to find out how many new places “Grey Eyes” will take me.

Roseway Publishing publishes literary work related to social injustices and the struggles involved in making the world a better place to live. We publish works of fiction, creative non-fiction, biographies, and other literary writing that is in keeping with our interest in social justice issues. Roseway is an imprint of Fernwood Publishing.

Access to publishing has traditionally been a fairly exclusive and privileged opportunity. One of the objectives of Roseway Publishing is to provide an outlet for an alternative voice. We are interested in publishing work with a social justice focus and hope that this also encourages those from marginalized communities to write from that experience.

We explored a number of possibilities in the development of the cover for Grey Eyes. Because the novel is set in a pre-contact time period and telling a story of a First Nation it was important that any imagery used be historically accurate. It soon became evident that it would be best to steer away from specific imagery and focus more on a creative use of type and texture. That’s how we came to use the four colours of the traditional medicine wheel, the texture of the animal skin and a bold use of type.

When did you first know you were going to publish this book?
When I read Frank Busch’s proposal I knew I wanted to read the manuscript. He was bold and confident and because of the nature of Roseway’s publishing mandate and my own political interests, I was particularly interested to read a manuscript by a new Indigenous writer. When I read the manuscript I knew immediately that we had to publish it. Much of the Indigenous literature available at this point is post-European contact and the opportunity to be able to bring a pre-contact novel to the Canadian public was something I wanted us to be part of.

Find even more writers-to-watch by getting caught up on our Get to Know Them First series. 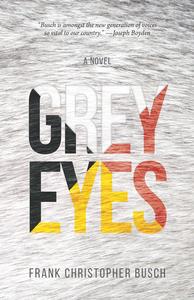 In Review: The Week of Oct 1st

November 24, 2014 Julia Horel
The All Lit Up Inspire! alt-Preview! (aka: Life off the Main Stage)