Andrew Steeves is a writer, editor, typographer, letterpress printer and literary publisher, and one of the co-founders (with Gary Dunfield) of Gaspereau Press. He has won over 50 citations for excellence in Canadian book design from the Alcuin Society. His essay collection Smoke Proofs: Essays on Literary Publishing, Printing and Typography appeared in 2014. 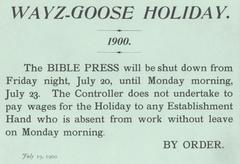 Autumn is nearly upon us, and while for most that means leaves, sleeves, and all things pumpkin-spiced, for those in the publishing biz it means WAYZGOOSE. Learn more about this silly word that, short answer, means “printer party”, and how it’s celebrated by modern-day ... Read more