Born in Windsor, Ontario in 1945, Kenneth Radu spent the first dozen years of his childhood in the culturally mixed neighbourhoods of that industrial city where people shared the prolonged experience of poverty. Educated at the University of Toronto, the University of Waterloo, and Dalhousie, married with three children, now grown, he has written a dozen books of fiction and poetry during his 33-year teaching career, a few of which garnered literary awards and nominations. He resides in a village not far from Montreal. 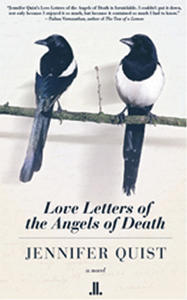 First Fiction Fridays: Love Letters of the Angels of Death by Jennifer Quist

A confident debut, Love Letters of the Angels of Death begins as Carrie and Brigs discover the remains of his mother in her mobile home. The rest of the family fall back, leaving them to reckon with the messy, unexpected death. By the time the burial is over, they understand ... Read more