Robert Pasternak, (NAK) is an artist, father, illustrator, graphic designer, novelty product inventor / manufacturer and filmmaker, spanning the themes of the cosmic, surreal, technological, metaphysical and what it means to be human. He has been creating and exhibiting his art for almost 40 years. His science fiction illustrations have appeared on Amazing Stories and On Spec magazine, on book covers for Guy Vanderhague and Timothy Findley. In 1994 he won the Aurora award in Canadian Sci-Fi art. His short films have played all over the world, with his first experimental short The Affirmation of Jimmy Brown being selected for the Venice Film Festival in 2004. In 2012 The Wonderful Worlds of Nak, a documentary by Patric Lowe was produced by MTS. In 2015 he performed on stage alongside his daughter Zorya Arrow in her choreographed theatrical alt-dance Genetics Project. Also in 2015, The Pasternak Award was formed in his honor by the Central Canada Comic Convention (C4) to be given annually to a local Winnipeg Artist who has given back to the community. His debut graphic novel is forthcoming from At Bay Press. 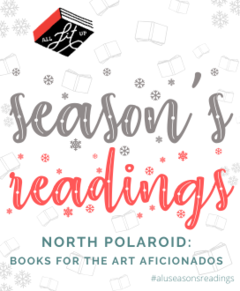 Today's #aluseasonsreadings picks are prezzies for the art aficionados on your gift list – the ones who are usually first in line for that special gallery exhibit and whose homes are lovingly adorned with their favourite creative works.