Melynda Jarratt is internationally recognized as the leading expert on Canada's war brides and is the author of three books on the subject. In 1995, Melynda wrote her master's thesis in history at the University of New Brunswick in Fredericton on New Brunswick war brides, and went on to obtain a diploma in digital media and design in 1999. She has continued to document this fascinating chapter in Canadian military history for nearly thirty years. She is the co-author of Voices of the Left Behind (Dundurn Press, 2005), which was a Book of the Month Club selection, author of War Brides: The Stories of the Women Who Left Everything Behind to Follow the Men They Loved (Tempus Publishing, 2007; reissued by Dundurn Press, 2009), and of Captured Hearts: New Brunswick's War Brides (New Brunswick Military Heritage Project and Goose Lane Editions, 2008). Melynda has also written on the history of Dutch immigration to Canada for Pier 21, and in 2012 she wrote the history of Bathurst's Brunswick Mines, entitled The End of an Era. Melynda has been the curator and outreach officer for the New Brunswick Sports Hall of Fame in Fredericton since 2012. 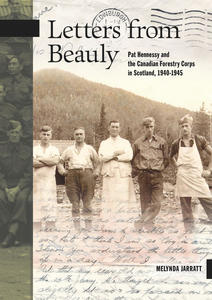 The eponymous letters in Melynda Jarratt's  Letters from Beauly (Goose Lane Editions) were discovered in her family home's attic. They detailed Jarratt's grandfather Pat's time in the Canadian Forestry Corps in Scotland during the Second World War, where he served as a ... Read more