Alex Boyd is a Canadian essayist, editor, critic and author of the poetry collection Making Bones Walk. Boyd hosted the IV Lounge Reading Series in Toronto and co-edited IV Lounge Nights, an anthology to celebrate the tenth anniversary of the series. Boyd also established Northern Poetry Review, a site for poetry articles and reviews, in April 2006. In 2008, he established Digital Popcorn, a site for personal film reviews, and has recently helped launch the Best Canadian Essays series with Tightrope Books, co-editing the first two collections. His second book of poems, The Least Important Man, was published by Biblioasis in 2012. Boyd lives in Toronto, ON. 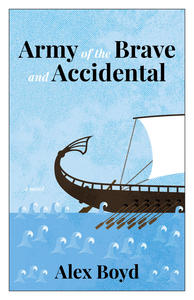 First Fiction Friday: Army of the Brave and Accidental

After a big launch at Toronto's Another Story Bookshop last night, we're celebrating the debut novel from essayist, editor, and critic Alex Boyd,  Army of the Brave and Accidental (Nightwood Editions). Learn how this book stacks Toronto against other world cities, uses mythology ... Read more