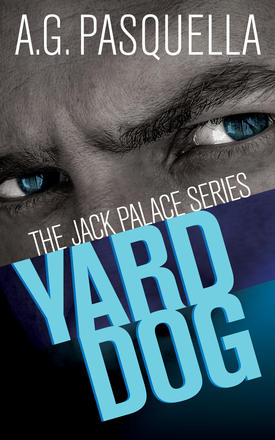 What does a man do when he gets out of jail? Jack Palace hits the streets, plunging back into a violent world of crime and corruption. Jack wants out, but first he must repay his debt to ... Read more

What does a man do when he gets out of jail? Jack Palace hits the streets, plunging back into a violent world of crime and corruption. Jack wants out, but first he must repay his debt to Tommy, the man who saved his life in prison. Tommy’s dad, an old school mob boss, is on his deathbed, and Tommy wants to take over the old man’s rackets. Jack and his new girlfriend, Suzanne, are soon caught in the middle of a mob war. Now Jack must fight to defend the people he loves from the man he has sworn to protect while he tries to get out of the criminal life alive.

What does a man do when he gets out of jail? Gets drunk and gets laid, not necessarily in that order. Tommy picked me up in one of his dad’s limos, screeching up to the front of the Don Jail with the sound system blasting, guards on the steps looking like they’ve been sucking lemons. The limo door swung open and there was Tommy in a ridiculous Hawaiian shirt covered in orange flowers, grinning at me over the top of his sunglasses.

Did this guy have a Jacuzzi back there? I slid into the limo, feeling the guards’ eyes boring a smouldering hole into the back of my neck. I knew what they were thinking. Who says crime doesn’t pay?

Tommy, grinning like a sultan, leaned back into the limo’s plush seats. “Tiffany, Amber … I want you to meet a friend of mine. Amber, go over there and introduce yourself. ”

Now, I like to think I’m a pretty stoic bastard, but going from a tiny jail cell to the back seat of a limousine with two beautiful bikini-clad women in the space of five minutes is a bit of a mindfuck. Still, when Amber brushed her breasts against my arm I wasn’t about to push her away.

“Jack, you want a martini? Tiffany, get my friend a martini. ”

“Sure, we got beer! Tiffany, get me a martini and get my friend a beer. ”

How many nights had I laid awake in the clatter and gloom of jail dreaming of The Perfect Beer? The kind you see in the commercials, bits of ice and moisture rolling down the sides, ice-cold and delicious.

I savoured the first sip, letting it roll gently across my tongue. The taste of freedom.

I drank the rest of the beer in about three seconds. Amber laughed. “You were thirsty!”

“Take off your top,” Tommy told her, and she did.

At the club, the music was so loud it shook my molars. A dark-haired waitress with impossibly long tanned legs swept away the third round of empty bottles. Fresh bottles appeared like magic. Tommy was swigging Grey Goose straight from the bottle because he was classy like that. Amber and Tiffany, now in party dresses, banged their heads together and laughed, white powder dusting their nostrils. Tommy did a line off the top of Tiffany’s left breast and the ladies laughed louder. I glanced around uneasily. Then it hit me: there were no guards, cops, snitches, stoolies, or parole officers here. This was Tommy’s place, and if he wanted to do a line off a stripper’s fake tits, it was his fucking business.

“You sure you don’t want some, Jack? This is good fucking shit!”

“You know why Mormons don’t drink or do drugs? It’s because they believe God gave them Free Will. ” I held up a bottle of beer, green glass glinting in the disco light. “Me, I like beer. ”

I downed the bottle as Tommy and the ladies laughed. “Doesn’t he talk funny? I love this guy! Jack, you’re a funny fucking guy!”

I grinned as Amber nestled closer. She smelled like vanilla. Goddamn, it was good to be free.

Tiffany and Amber were naked now, gyrating together in Tommy’s V. I.P. lounge. Amber wriggled out of her little black party dress so sexily I almost asked her to put it back on and do it again. Tiffany ran her wet pink tongue along Amber’s neck, both girls swaying to the soul music pouring from the speakers like molasses. Next to me in the darkness Tommy twitched and groaned. Tiffany’s manicured hand rubbed Amber’s tits and dropped lower, her finger dipping into Amber’s folds before pulling away, teasing. Amber moaned and fell to her knees. Tiffany grabbed the back of Amber’s head and pushed her face between her legs. They moaned together, swaying. They seemed to be genuinely enjoying themselves and that turned me on. Amber lay back on the stage with her legs spread, giving us an eyeful. I had just enough time to savour the view before Tiffany crawled over on her hands and knees and dove between Amber’s thighs.

After five minutes Tommy couldn’t stand it. He leapt up, charged toward the girls, and seized Tiffany’s hand. “There’s bedrooms on the third floor,” he shouted back at me as he pulled Tiffany from the room. “See you in the morning. We’ll talk business!”

I knocked back the last of my beer. The room wobbled. I must have been drunk because the idea of doing business with Tommy didn’t bother me a bit.

Amber stood over me, naked. “Are we going upstairs?”

At some point in the night I woke up to Amber shaking me. She looked freaked the fuck out.

My heart galloped as I fumbled for my knife. It took me a few seconds to realize the knife was long gone, sitting tagged and bagged in some police evidence locker. “What? What is it?”

“You were screaming in your sleep. Are you okay?”

My grey undershirt was soaked with cold sweat. “Yeah,” I lied, “I’m fine. ”

He has created some really compelling characters that you just keep rooting for. I love Jack Palace. I love how badly he wants to just escape this kind of life, and how much it’s his sense of honour and morality that keep sucking him back in.

An old school noir romp through the belly of the city, splashing sex and violence all over Spadina Avenue. Pasquella confidently squeezes pulp right out of the pavement and onto the page.

Readers who enjoy an intelligent take on gangster fiction might want to give Yard Dog a try.

A rusty syringe of lurid pulp thrills. Pasquella's love of old school crime fiction is clear, but like a beer bottle smashed across your jaw, he’s jolted the genre into the 21st century.

Let’s hope the second Jack Palace [book] is published soon; otherwise, readers might get impatient waiting for it.

The writing here is very impressive: gritty and profane but also (in the right places) tender and quite moving.

Kudos to A. G. Pasquella for bringing us Jack Palace, a razor-sharp modern-day noir anti-hero who is vulnerable in all the right places. Set in Toronto, the city comes to life, gritty, pungent and morally rotten, but fragrant with the scent of vanilla cookies and charged with martini-fuelled sex. The pillow talk will crack you up… Yard Dog is fabulous, original and noir to the bone!

Yard Dog is a tightly written, fast-paced thriller with a deft mix of real heart, surprising humour, and a deep affection for its setting even as it drenches Toronto's streets in blood. A. G. Pasquella knows his James Ellroy and his Elmore Leonard, and he blends them into a powerful overproof cocktail of gangster mayhem.

We're glad things don't go too smoothly for Pasquella's ever-conflicted but hopelessly romantic hero. .. because then there might not be another installment to look forward to.