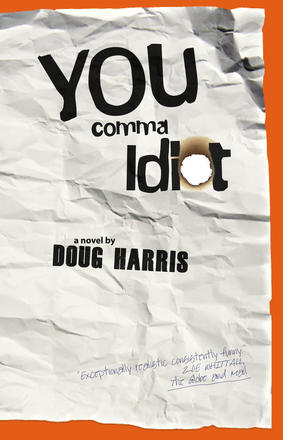 "You're the kind of guy who falls in love after one date. "

"You're the kind of guy who falls in love after one date. "

Marginalized and alienated, perennial fuck-up Lee Goodstone is a resounding zero: a low-rent hash-dealer with delusions of inadequacy. He's content to while away the hours of his life drinking, smoking, hanging out, playing the occasional game of hockey, and generally ignoring the world outside his tiny neighbourhood.

But Lee's near-idyllic existence is about to grind into second gear. His friend Henry has been accused of kidnapping and Lee's been cornered by the local media. Another friend has decided to shoehorn his way into Lee's drug business. And he's just made it with his best friend's girlfriend. Clearly, Lee needs a Plan B — not easy for a guy who long ago decided that the correct plan of action is to have no plan at all.

In his teens, Doug Harris unloaded watermelon trucks from Florida and disposed of corpses at an animal hospital. Then, in his twenties, he got through film school by working night shifts as a hospital orderly — once again transporting dead bodies. Though it was hard to leave the cadavers behind, at 24 Doug co-wrote and directed the feature film Remembering Mel, a quirky, ambitious comedy that was screened in Canada, Great Britain, and Germany. Today he runs an award-winning video production company.

"A whippet-quick, greasy read. Harris is to Montreal what novelist Russell Smith is to Toronto . .. a clever wordsmith/observer of the under-engaged and slothful. "

"Debuting novelist Doug Harris has crafted a whippet-quick, greasy read in YOU comma Idiot, and it starts with a believable group of characters . .. The author also does a splendid job in depicting in minute detail the fading jewel that is Montreal. In fact, he's to Montreal what novelist Russell Smith (How Insensitive, Girl Crazy) is to Toronto . .. a clever wordsmith/observer of the under-engaged and slothful. "

"Exceptionally realistic — consistently funny. . .. A funny slice of life slacker dude style. . .. If you were ever a teenaged badass in Montreal, you will know Lee Goodstone. He's the kind of dealer you can befriend with ease; he'll smoke you up for the exchange of his appreciative glances and harness the kind of wit an adolescent girl will swoon for in its cynical wisdom, and later recognize as trite. "

"Keen and often humorous . .. the fun [Harris] appears to have writing this novel spills over to those of us reading it. "

"Rapid-fire, authentic and a pleasure to read. "

"YOU comma Idiot . .. puts the fun back in books. You ll bust your guts laughing and you might even crack a rib. "

"By the end of the novel, Lee felt like an old-friend, someone that I had run into again after a long time and spent the day reminiscing with. Harris's book is a surprisingly meaningful work. . .. YOU comma Idiot is mostly a really fun and engaging read, and a welcome break from all the other 'eccentric' or 'quirky' novels out there, overbearing in their attempts at literary greatness through offbeat realism. "

"More entertaining and relevant than any of the books that won Canadian literary prizes in 2010. "

"As reader, we are both trapped inside Lee's vision of the world, and watching Harris get it all down with delicious verve and wit. . .. I found this a brave book. A hyper-lucid guy plays against the odds, bats out of his league and survives to tell the tale, just. "

"[A] blistering social satire, set in Montreal, which frequently had me laughing out loud. . .. a tour de force of second-person narration. "

"[A] hash-fuelled joyride about some less than beautiful losers . .. YOU comma Idiot is a black comedy with some neat twists. Throw in a fresh jacket design and endpaper illustrations by the author and you have a winner. "