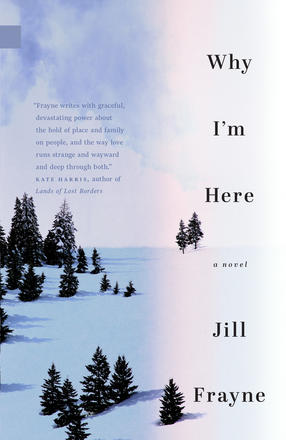 Fifteen-year-old Gale is desperate to get out of Whitehorse, a fact that is immediately clear to counsellor Helen Cotillard when Gale walks into her office with her reluctant stepmother. It’s 1995, and one counselling agency for kids and families serves all of the Yukon. Gale ... Read more

Fifteen-year-old Gale is desperate to get out of Whitehorse, a fact that is immediately clear to counsellor Helen Cotillard when Gale walks into her office with her reluctant stepmother. It’s 1995, and one counselling agency for kids and families serves all of the Yukon. Gale has been having anxiety attacks, the last one so severe it landed her in the hospital.

Helen soon begins to realize that Gale’s distress at being separated from her little sister Buddie too closely parallels a calamity from her own past. This tragic similarity leaves Helen uneasy about her profession and her ability to help her clients. When Gale does escape back to her home in Cobalt, Ontario, to protect Buddie from their brutal mother, she risks her own future.

Through arresting, compelling images, Jill Frayne shows both the fierce beauty of the Yukon, and the damaged, enduring landscapes of two human hearts.

Jill Frayne worked for many years as a family counsellor in Toronto and Central Ontario. Following a solo journey to Canada's West Coast and Yukon Territory, her GG-nominated travel memoir, Starting Out in the Afternoon, was published by Random House. Since then, her outdoor adventure articles have appeared in several Canadian publications: The Walrus, Explore Magazine, Up Here, Canadian Geographic, to name a few. She divides her time between a maple woods in Central Ontario and the mountains around Atlin, BC. Why I'm Here is her first novel.

“You’rehere, what, two years now? Where were you before?”

Helen liked this. She was a southerner herself. “Silver-miningtown, right? Broken-up roads, head frames from the mining days on every corner. I grew up in Ontario too, south of there. ”

Gale gave her a goody-for-youlook.

“Is your mom still there? Who else is back home?”

Galefrowned. “I thought I was here because of nearly passing out at school. ”

“Iask because it’s your family,” Helen said mildly. “You probably think about themall the time. I don’t know if it’s relevant or not. ”

“Bernice. We call her Buddie. ”

“Andyour name? It has an unusual spelling. ”

“There was a big stormwhen I was born. ”

Helen smiled. “A gale. How old is Buddie?”

“And the farm you live on? A working farm?”

“Howdo the four of you get along?”

Gale looked over at Sandy and frowned.

Anothersigh from Gale, not dramatizing, as far as Helen could tell, genuinely aggrieved. “They fight a lot. My mom drinks. ”

“What happens when she’s drinking?”Gale shook her head. “They get going. ”

“What do you and your sisterdo when they’re fighting?” “Clear out. I take Buddie upstairs. ”

“Doesyour step-dad ever hit you or your sister?” Gale frowned. “Neil’s her father. Hedoesn’t hit us. ”

“What about your mother?”

Galesnorted. “She doesn’t have to. ”

Sandy drummed her fingers. Helen turned to her.

You’veprobably read the same stuff I have that says: Don’t even try it if the kid is olderthan ten. Older than ten, they belong to the first family and will never sign onto a second. What do you think? How’s it going for you?”

Sandy drew herself up. Helen had the impression thiswas the question she’d come to answer. “Dan and I have been trying to get Gale uphere since day one. I helped him get custody—which meant zero to Gale’s mother. Court orders don’t impress Mindy. Then it suited her to send Gale to us, and Galestarted coming up every summer—our ticket, of course. That went on for . .. how longGale? Years. It made me sick to send her back. ” She stirred herself fussily, narrowedher eyes at Helen. “I have to tell you, Gale’s mother is a piece of work. She’sviolent. She has a problem with violence. There have been I don’t know how manyassault charges against her. Police in the house time and again. I’ve seen whatit’s done to Gale. ” She looked pointedly at Gale who was gazing at the floor. “Butwe all had to go along. Mindy’s little power trip. ”

“Ever hear of the reign of terror?Gale’s mother is a violent drunk who has to run everything. Everybody walks on eggshells,starting with Gale’s father. You should have seen him when I met him. Talk aboutconflict-avoidant. And he’s not much better now. ” She straightened her back. “Asfor Neil, Gale’s stepfather, Neil runs sled dogs and when he isn’t doing that, heshears sheep. It takes a very strong man to wrangle a two-hundred-pound ram, orget a team of trail dogs to do what you want. Last time I talked to Neil, he soundedlike he’d have trouble lifting a Chihuahua. ” She took a long breath. “Mindy breakspeople. ”

Helen looked at Gale. She appeared to have tuned out. “What do you think about what Sandy is saying, Gale?”

Sandy burst out, “Gale, for the love of Pete. This isabout Mindy. There’s no way you losing your breath isn’t connected to her; whatshe did. ”

Gale came alive. She said furiously, “That was a caper. She pulled that shit all the time. It has nothing with to do with my . .. whatever. ”

Sandyturned fully to Gale, blew out her breath with exasperation. “You could have died. You know how close it was. Do you think that doesn’t register somewhere, doesn’thave an effect on you!”

“No!” said Gale, jumping up, glaring atSandy. “We aren’t talking about this! We had a deal and now the deal’s over. ” Sheclutched up her blazer and flung out of the room.

A wake of silencefollowed her exit. Helen sighed. “Better go after her, Sandy; otherwise she’ll thinkyou’re in here telling me everything and I’ll never see her again. ”

Sandyscooped up her belongings, her expression grim. “She needs to be here. I’m tellingyou. ”

A minute later, Helen heard her bang down the fire escape.

”Why I’m Hereis a brave novel about how families define people’slives and destinies. ”
~ Jeremiah Rood, ForewordReviews