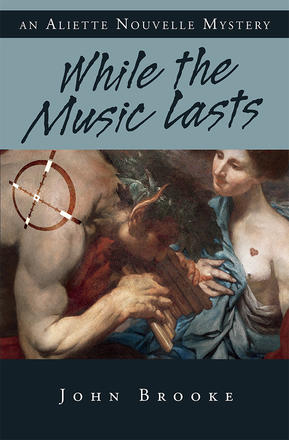 While the Music Lasts

While the Music Lasts

Luc Malarmé was one of France’s most popular rock stars when he was convicted for the murder of his girlfriend, beloved film star Miri Monette. After nine years in prison, he has just been released and come to live at his country retreat near Saint-Brin — Inspector Aliette ... Read more

Luc Malarmé was one of France’s most popular rock stars when he was convicted for the murder of his girlfriend, beloved film star Miri Monette. After nine years in prison, he has just been released and come to live at his country retreat near Saint-Brin — Inspector Aliette Nouvelle’s home and base of operations. All Malarmé wants is to tend his vineyard and play music. But the citizens of Saint-Brin have neither forgotten nor forgiven his crime against Miri, or, it turns out, some ugly prior local history involving Luc. They let a fallen star know he’s no longer welcome in town. Aliette is appalled at her fellow townspeople. Hasn’t Malarmé paid his debt to society?

Someone obviously doesn’t think so. The violence begins with the poisoning of the musician’s dog, and quickly escalates. Malarmé is badly beaten. Then his vineyard is torched and there is an attempt on his life. The shooter misses and the wrong man dies. Or did the shooter miss? Aliette loves Malarmé’s music. But even she knows the man is trouble.

John Brooke became fascinated by criminality and police work listening to the courtroom stories and observations of his father, a long-serving judge. Although he lives in Montreal, John makes frequent trips to France for both pleasure and research. He earns a living as a freelance writer and translator, has also worked as a film and video editor as well as directed four films on modern dance. Brooke’s first novel, The Voice of Aliette Nouvelle, was published in 1999. His poetry and short stories have also been widely published and in 1998 his story "The Finer Points of Apples" won him the Journey Prize.

Ten years had passed since the tragedy?--?a blow to the head that killed his lover, the actress Miriam Monette. He had been released the previous spring. It was on the evening broadcast; they’d caught a preview of that dull, fixed-forward stare. Legally, Luc Malarmé, former frontman and driving creative force behind Ma Malheureuse Pelouse, had paid his debt to society and was just another man faced with the long, slow task of rebuilding his life. But Luc was not just another man, and moral outrage is like an insidious weed. When a friend tried to help Luc get a leg up, the weed grew rampant. The friend was a theatre director in Montreal who was mounting a play and had created a role for Luc?--?as an on-stage balladeer narrating the thread in song. The shrill reaction to this gesture made it more than a little ironic that it was a play about forgiveness.

Chief Inspector Aliette Nouvelle thought so. ‘Let the man get on with his life!’ she blustered.

Luc Malarmé was only a singer, after all. Perhaps he would sing a redemption song.

Magistrate Sergio Regarri thought Luc surely would, suggesting, ‘Who among us is above forgiving?’

In the world of French celebrity Miriam Monette had been the equivalent of royalty. Both her parents had enjoyed long and much-praised careers on stage and sceen. Miri was a princess. When news of Luc’s planned Canadian gig surfaced, her father led the righteous parade, declaring it a travesty that Luc Malarmé should sing again in public. How could he sing with Miri confined to the grave? It confirmed the man’s utter lack of remorse. Miri’s papa appeared on evening télé and said it plainly, ‘I detest him. I cannot forgive him.’ A legion of commentators fell loudly in behind. They said that for Luc Malarmé to sing again on stage would render his sin null and void. A politician in Canada who stood for family values intervened. Decreeing that all right-thinking Canadians agreed, the minister in charge of culture made sure Luc’s work visa was revoked.

Paris buzzed and snarked and roiled…

Watching from the south of France one warm evening in early autumn, a disgusted Aliette remarked, ‘How lucky for Canada to have such morally decisive leadership. Poor sheep.’

‘And couldn’t we use some here?’ Sergio replied, laconic, ironic, but not cynical.

Dear Sergio could not allow himself to be cynical and hope to do a decent job.

For a cop, it’s harder. Aliette supposed she could understand Miri’s aggrieved papa. And she had agreed with the feminist side of the debate the sad incident had sparked during the trial some ten years before. There may have been mitigating circumstances, but there was no excuse.

But the backlash of bitterness disappointed her. Nine years in prison is not nothing.

In November a popular Senegalese band invited Luc to come and sing with them.

Which incited yet more angst and accusation in the salons and studios of Paris.

Luc Malarmé had come down before Christmas, to his retreat on a ridge between Prades and Berlou. They’d started seeing him around town that winter. It was hard to miss that boyish face, the tousled hair that kept him looking barely over twenty even after nine years in a prison cell. He was indeed well practised in the art of gazing straight ahead. Luc Malarmé now existed in a netherworld of shame, permanently stained by his violent act. Most citizens of Saint-Brin stared but kept their distance as he unassumingly took his turn in line at the post office, the bank, the butcher’s, or at the Sunday market, that most public moment in the course of a week, when you saw everyone, at least in passing. They were curious to see such a man so close, and so ordinary. Aliette stared too. Impossible not to.

Others were more than curious. They were the ones who found him unforgivable.

It was the way they sized him up, openly judgmental, as if he were a melon past its prime.

But apt for a Sunday morning in early March. Aliette and Sergio were selecting tomatoes. Luc Malarmé was directly across the lane, at a fruit vendor’s, standing in a shaft of spring sunlight that had found its way through the covering of plane tree foliage. He was choosing a cantaloupe, appraising each piece of fruit with a touch once magical on a keyboard, a guitar string, working notes from his haunting flute. The Midi sun was truly warm that day and you might have thought that simple fact might be reflected in a fruit vendor’s eyes. But, no… Aliette watched the woman edging closer, peering, angry in advance, as if sure that Luc Malarmé would grab one of her wares and run, a pathetic petty thief. The sheer meanness in that woman’s face left the inspector boggled. ‘He looks so utterly alone,’ she murmured.

‘Everyone looks lonely when they’re shopping.’

Sergio’s off-the-cuff profundities were one of the many reasons Aliette had stayed with him for coming on three years. Today, purposely or otherwise, he’d missed her point. ‘I mean in the world. No one will go near him… How can that woman go to mass?’

‘She doesn’t. She comes here to sell her fruit.’

‘Invite him for a drink. Take him out of pity.’

‘Everyone does, in their own way.’

Sergio got back to the business of selecting fare for their Sunday lunch. He chose another tomato and added it to the basket on the inspector’s arm. Then three more with quick resolve. Some radishes, lettuce, cucumbers. Aliette edged along beside her judge. Gawking? Luc Malarmé was more intriguing than her lover’s feel for fresh produce.

He was now bent over a crate of peaches, apparently oblivious to the resentment telegraphed from the fruit vendor’s damning eyes. But a veteran cop is hard-wired to the concept of intent and Aliette was deciding never to buy another piece of fruit from that awful woman when Sergio leaned close, advising, ‘You have to let people live their lives. He’ll sort it out. It’s not like he’s without resources.’

Of course he was not without resources. Luc Malarmé was rich. His band had been the biggest French music phenomenon since Johnny Hallyday. Nine years in jail and all the related legal costs would not come near to depleting that man’s stash of music industry gold.

‘But he’s starving for forgiveness,’ she countered.

‘Alors, what do you suggest?’

‘I don’t know… Do we not forgive the sinner who has paid the price?’ A question based on the words of our Saviour and hundreds of years of legal philosophy, not to mention her mother’s pithy admonishments that always went straight to her heart and stayed there.

Sergio shrugged?--?he was only an Instructing Judge. He gently freed the basket from her arm and presented it to the vegetable vendor to be sorted, weighed and priced.

Aliette heard a voice behind her utter, sotto voce, ‘It’s wrong, so smug, to come walking back into the world like that, glorying in the fact of himself, like nothing happened. Poor Miri. If he weren’t so rich he’d be rotting in his jail cell. We’d not have to see this in our town!’

Where did these people get their ideas? How could anyone be smug after nine years inside?

And the hateful fruit vendor had no problem accepting his money…

Aliette watched him, bags in hand, head bowed, alone as he moved off through the market.

It was as if he had come to test them.