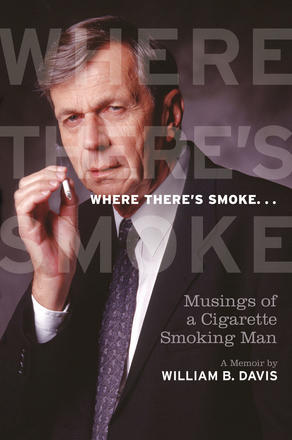 One of the most iconic villains in the history of television, the enigmatic Cigarette Smoking Man fascinated legions of fans of the 1990s’ hit TV series, The X-Files. Best known as “Cancerman,” he was voted Television’s Favourite Villain by the readers of TV Guide. ... Read more

One of the most iconic villains in the history of television, the enigmatic Cigarette Smoking Man fascinated legions of fans of the 1990s’ hit TV series, The X-Files. Best known as “Cancerman,” he was voted Television’s Favourite Villain by the readers of TV Guide. The man behind the villain, William B. Davis, is a Canadian actor and director, whose revelations in this memoir will entertain and intrigue the millions of X-Files aficionados worldwide.

But there is more to Davis’s story than just The X-Files.

Davis’s extensive acting experience began when he was a child in Ontario in the 1950s, and grew to encompass radio, theatre, film, and television. At the University of Toronto, where he graduated with a degree in philosophy, he turned his hand to directing, a move that took him to theatre school in Britain and a directing career. There, he reconnected with his undergraduate colleague, Donald Sutherland, and worked at the National Theatre, with such notables as Sir Laurence Olivier, Dame Maggie Smith, and Albert Finney.

Those who love the theatre will delight in his recollections of the Straw Hat Players in Ontario or the trials and tribulations of an artistic director of repertory theatre in Dundee, Scotland, or his valiant attempt to create a theatre in Quebec devoted to the Canadian repertoire. Those who love history will relive with Davis those “golden years” of Canadian radio drama and theatre, not to mention enjoying an inside look at the National Theatre School of Canada where he directed the English Acting Program in the ’60s. Those who love a bit of scandalous gossip will not be disappointed.

Written in an easy conversational style, this memoir truly is “The Musings of the Cigarette Smoking Man” – as William B. Davis reflects on his loves, his losses, his hopes, his fears, and his accomplishments in this unique and engaging autobiography.

William B. Davis is best known as “Cancerman” from The X-Files. On the small screen his recent credits include guest appearances on hit shows including Human Target, Caprica, and Supernatural. He was the artistic director of the English Acting Program at Canada’s National Theatre School and later founded Vancouver’s The William Davis Centre for Actors’ Study. Davis has also appeared in a succession of films opposite stars including Penelope Ann Miller, Martin Sheen, Anne Archer, Margot Kidder, Matthew Perry, and Brian Dennehy. He lives in Vancouver, BC.

I’m standing beside a filing cabinet. To my right is the actor Charles Cioffi, and to his right is Ken Camroux, the actor playing the Senior FBI Agent, the part I read for and didn’t get. I got this weird part with no lines. All I do is smoke. On the other side of the desk is a young unknown actress with red hair. We are doing a low budget pilot for an obscure science fiction show about alien abduction, if you can believe it. Well, a gig is a gig. I’m getting paid. Scale, I think.

I’m feeling pretty dumb, just standing there like a statue listening to the red-haired actress talk about someone called “Spooky Mulder. ” I look at the cabinet beside me, the top just below my shoulder. I think, ‘If this were really me, would I stand here as if I were part of the scenery?’ which of course I was. ‘What’s to lose,’ I think. So I stretch my elbow across the top of the cabinet, cross my feet, and watch the action from this new position, a praying mantis with a cigarette. An icon was born. You can buy the trading card if you want.

At that moment my career went up in smoke. Well, perhaps it had been smouldering for some time. Once a boy wonder, I had failed in my major ambition. I was not the Artistic Director of the Stratford Festival at the age of twenty-nine, unlike my idol, Peter Hall, who headed the Royal Shakespeare Company in the UK at that age. Still, always torn between directing and teaching, I was getting along, making a good living, until that fateful day when everything changed.

At the time, of course, I had no idea anything had changed. I had played a non-speaking role in a pilot for a television show whose chances of being picked up were about as good as the Chicago Cubs winning a World Series. It would be another year or two before the show and then this character became household names. At age fifty-three, I would become a full-time actor, a star even, dealing with fan mail to this day.

One of my pet peeves are workshops conducted by successful people in the film business. Do what I did and you too can be a success. What did I do to become a successful actor and minor celebrity? I auditioned for a small role, didn’t get it, and got an even smaller one with no lines. If you do that, you too can become a television star. Life is random. David Duchovny and Gillian Anderson became stars by chance. That is not to say they weren’t and aren’t worthy. They are talented actors and I wish them the best. But there are hundreds of other talented actors who were not so lucky. I’m waiting for the workshop where a lottery winner tells her story and inspires us to follow in her footsteps. It’s all a question of where and when you buy the ticket, the 7-Eleven on Main Street on the second Monday of the month.

It may be that life is really a series of random events. But being biologically human, I am going to make a story out of them. The story will be a lie, of course. But then so are the best stories. Richard III was actually a good king and Macbeth ruled for years. I don’t promise a story of Shakespearean scope, but hopefully it will be entertaining and occasionally enlightening.

I may even open a window into my soul — well, not my soul actually, I don’t have one of those, but I will let you inside, as far as I dare.

Should the story be lineal? Should I start at the beginning and finally arrive at now? I am a product of the print generation and for us, according to Marshall McLuhan, lineality is natural. But many readers will be younger and will have grown up in the electronic age. When did you last see a movie where the story started at the beginning? In fact, when did you last see a movie where you could follow the story? Well, perhaps that’s another issue. Suspense in a movie used to be about how the movie was going to end. Now it seems to be about how the story is going to come together. I could weave a tapestry of events and you could be on the edge of your proverbial seat wondering how it will all come together. And then, the joke would be on you. It doesn’t come together.

It may feel like one life, but is it really? They say that every seven years each cell in our body has changed. Am I the same person that I was seven years ago, or in my case, seventy years ago? Bill Davis has had many lives, many loves. These stories may weave together into a coherent whole or they may not. There will be stories of life in wartime Ontario, of early Canadian theatre and radio, of university life in the late fifties, of Britain and British theatre in the sixties, of the National Theatre School of Canada and Festival Lennoxville, and finally, The X-Files. But is Bill Davis an actor, a teacher, a director, a skier, a water skier, a lover? Wasn’t he once a birdwatcher and a bridge player? Who is he, really? It’s all very well for Polonius to say, “To thine own self be true,” but who the hell is thine own self?

I will leave it to you to decide about meaning; all I can tell you for certain is that it’s been quite a ride and it’s not done yet.

“Readers in general will enjoy William B. Davis' unforgettable memoir, written with wit, verve, humor, and poignancy, a page turner every bit as intriguing as the man himself. ” — The Internet Review of Books

“An entertaining and addictive read, filled with humorous anecdotes and insightful, insider stories from the set of The X-Files. " — Waterloo Chronicle

"In this warm and entertaining memoir, he discusses his life and career, including anecdotes, recollections and gossip from time on-stage. ” — Globe and Mail