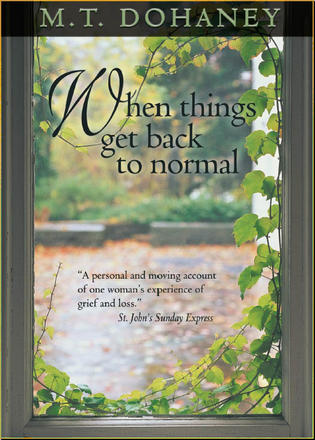 When Things Get Back to Normal

When Things Get Back to Normal

One Friday, Walter Dohaney, novelist M. T. (Jean) Dohaney's husband, went out as usual to play hockey with his friends. She never saw him alive again. Without warning, Jean was plunged into the most painful and disorienting experience of her life. Faced with a tumult of emotions ... Read more

One Friday, Walter Dohaney, novelist M. T. (Jean) Dohaney's husband, went out as usual to play hockey with his friends. She never saw him alive again. Without warning, Jean was plunged into the most painful and disorienting experience of her life. Faced with a tumult of emotions and sudden responsibilities, she turned to her writing for solace and began a journal. In her journal, Dohaney's sharp sense of humour and her impatience with conventional pieties lay bare the depth of her bereavement, yet at the same time they express the life force within her. She is frank about her anger at Walt for playing hockey despite his heart condition and for not being there to take care of the house and family; she faces her annoyance at sincere well-wishers who say exactly the wrong thing; and she exposes her distressing loneliness.

When Things Get Back to Normal is a compassionate yet bracing companion for those struck down by loss, which indirectly gives practical advice about the changes that come with widowhood. Two years after her husband's death, Jean agreed to publish her journal. When Things Get Back to Normal gained critical acclaim when it was first published in 1989, but its finest praise came from the dozens of people who wrote and called to tell the author how it had helped them through their own grief. When Jean's novel A Fit Month for Dying was released in 2000, the publicity surrounding the book prompted a flurry of phone calls to the publisher from people seeking copies of When Things Get Back to Normal.

During the next year Goose Lane Editions sought out and acquired the book and the new edition was released, due in no small part to the many readers who took the book, and Jean Dohaney, into their hearts. Author Helen Fogwill Porter was one of the many that found strength in When Things Get Back to Normal when her husband died, and her introduction to this new edition offers her own experience of "normalcy. " Jean Dohaney's new afterword tells where she is now, fifteen years after Walt's death.

M.T. (Jean) Dohaney was born in the small village of Point Verde, Placentia Bay, Newfoundland. She moved to Fredericton in 1954, where she completed her BA in English at the University of New Brunswick. She holds both a MA and PhD in literature from the University of Maine and Boston University, respectively. In 1988, she released her first book, The Corrigan Women, which was followed by To Scatter Stones in 1992, A Marriage of Masks in 1996 and A Fit Month for Dying in 2000.

Other titles by M.T. Dohaney