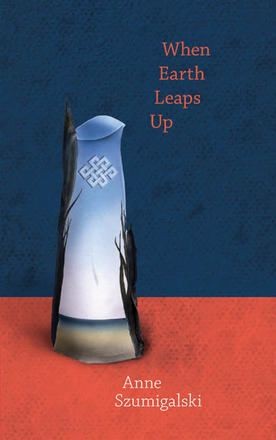 When Earth Leaps Up

When Earth Leaps Up

“…one of Canada's major poets. The audacity — the courage — of her imagination teaches us, gives us our better selves.” — Tim Lilburn

This posthumous collection will be a delightful surprise for readers who thought they had heard the last of Anne Szumigalski's nimble, ... Read more

“…one of Canada's major poets. The audacity — the courage — of her imagination teaches us, gives us our better selves.” — Tim Lilburn

This posthumous collection will be a delightful surprise for readers who thought they had heard the last of Anne Szumigalski's nimble, sideslipping, otherworldly voice. Szumigalski's poetic universe is as beguiling and unpredictable as dreams and myth, and like them, her universe can be enchanting, visually lush, and suddenly dangerous.

Untitled (“glory to the queen…”)

The poems deal with ultimate questions. What is time? What is memory? Is it invented or real? Is death a kind of dream? Is life? Is God a man, a woman, or a Sacred Reptile? The imaginative leaps in When Earth Leaps Up are as easy as looking up at the prairie sky, as simple as turning your head to the side to catch a glimpse of an idea as it skips past you in the form of an interesting stranger, a passing cloud, the face of a loved one, long dead.

Szumigalski immigrated to Canada from England in 1951, and lived in Saskatoon from 1956 until her death in 1999. The author of 15 books, she received the Governor General's Award for poetry in 1995 for Voice, a collaboration with the visual artist Marie Elyse St. George.

Mark Abley is the editor or author of 10 books, including the internationally acclaimed Spoken Here: Travels Among Threatened Languages. Abley is the literary executor for Anne Szumigalski.

Anne Szumigalski (1922-1999) was born in London, England and immigrated to Saskatchewan in 1951. She was the author of sixteen books including Woman Reading in Bath (1974), Doctrine of Signatures (1983), Voice (1995), and On Glassy Wings (1997). She also collaborated with Terrence Heath, Elyse St. George and many other writers and artists. Her work appeared in countless journals, both in Canada and abroad, and many anthologies. Over the years, Anne won numerous prizes including a Governor-General's Award, two Writers' Choice Awards and two National Magazine Awards. A founding member of the Saskatchewan Writers Guild and a founding editor of Grain, she received a lifetime award for excellence from the Saskatchewan Arts Board as well as life memberships in ACTRA and the League of Canadian Poets.

Mark Abley is the author of three poetry collections and four non-fiction books, including The Prodigal Tongue: Despatches from the Future of English. The winner of Canada's National Newspaper Award for critical writing, he has been a contributing editor of both Maclean's and Saturday Night magazines, and a regular contributor to the Times Literary Supplement. He lives and works in Montreal.

"There's a harmonious quality to the threads and strands of Szumigalski's poetry ... it's good to have this gathering of last words from her."--Barbara Carey, The Toronto Star

"In this Age of Glib, When Earth Leaps Up is a tonic. There are no slick-quick fixes in Szumigalski's poetry. What you'll find, instead, is a reaching-out for what we used to call ‘wisdom’ — a tactile word-touching of abstractions that manage to get deeply at the strangeness and complexity of our lives. Szumigalski added something new to Canadian poetry, and this book is as good a place as any to find out what it was." —Carmine Starnino, The Globe and Mail

" ... The grand old woman of Saskatchewan letters and bristling conscience of the writing breed ... Anne Szumigalski cultivated a world in which the so-called miraculous was not that big a deal ... The poems are the miracles."--Bill Robertson, Saskatoon StarPhoenix

Other titles by Anne Szumigalski