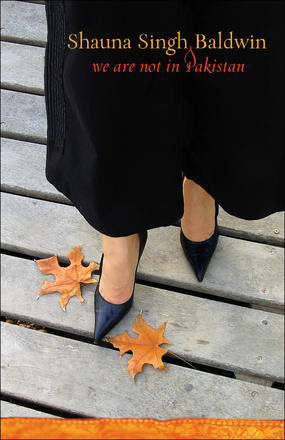 We Are Not in Pakistan

We Are Not in Pakistan

A Quill & Quire Book of the Year

Ten years after her stunning debut, Shauna Singh Baldwin returns to Goose Lane with an outstanding new collection of ten stories. Migrating from Central America to the American South, from Metro Toronto to the Ukraine, this book features an unforgettable ... Read more

A Quill & Quire Book of the Year

Ten years after her stunning debut, Shauna Singh Baldwin returns to Goose Lane with an outstanding new collection of ten stories. Migrating from Central America to the American South, from Metro Toronto to the Ukraine, this book features an unforgettable cast of characters. In the title story, 16-year-old Megan hates her Pakistani grandmother — until Grandma disappears. In the enchanting magical realism of "Naina," an Indo-Canadian woman is pregnant with a baby girl who refuses to be born. "The View from the Mountain" introduces Wilson Gonzales, who makes friends with his new American boss, the aptly named Ted Grand. But following 9/11, Ted's suspicions cloud his judgment and threaten his friendship with Wilson.

Each containing an entire world, these stories are marked by indelible images and unforgettable turns of phrase — hallmarks of Baldwin's fictional world.

"Baldwin displays an uncanny knack for getting under the reader's skin and stirring a potent cocktail of empathy, sadness, pity and rage. She has a gift for dialogue — an almost musical ear. Her writing is so strong and so consistent that she'll make you forget you're reading. And that alone is worth the price of entry. "

"Shauna Singh Baldwin is her own master. "

"Baldwin is . .. far more overtly political than most of Canada's younger novelists, and she becomes more ambitious with every book. . .. Shakes up the prettiness of much of the Canlit landscape. It wants to be global, and in this it succeeds. "