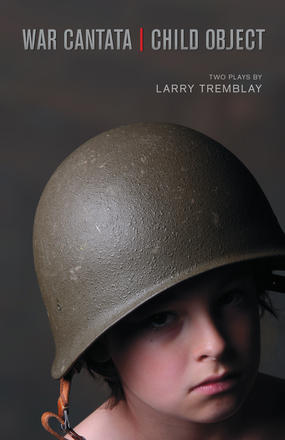 War Cantata translated by Keith Turnbull How far will humanity go in its quest for power? Why do we desire to eliminate each other through war? War Cantata looks at ways the impulse for violence is transmitted from one generation to the next; for example, when a father teaches ... Read more

War Cantata translated by Keith Turnbull How far will humanity go in its quest for power? Why do we desire to eliminate each other through war? War Cantata looks at ways the impulse for violence is transmitted from one generation to the next; for example, when a father teaches his son hatred to transform him into a soldier impervious to pity. Without focusing on a particular battle or soldier, this harsh, intense, choral text builds the rhythmic power of words to expose war’s spiral toward hatred.

Cast of 2 men and a chorus.

Child Object translated by Chantal Bilodeau With child as a blank page, a man sets about constructing his ideal companion manipulating personality, gender, and body. The child becomes the ultimate consumer good.

"With a vocabulary that does not fear ugliness and vulgarity, Larry Tremblay creates a state of emergency without wallowing in pathos. His writing digs into pain while providing relevant reflection. In its happy fusion between emotion and thought, he traces the contours between commitment and poetry . .. [between] the weight of savagery and the hardness of a crippled civilization. "
– Olivier Dumas, Montheatre. qc. ca

"It is rough, it's brutal, it comes as a string of gunshots . .."
– Annie-Soleil Proteau, CBC/Radio-Canada

"This is a powerful work, mesmerizing, painful. "
– Karyne Lefebvre, CBC/Radio-Canada

Other titles by Keith Turnbull