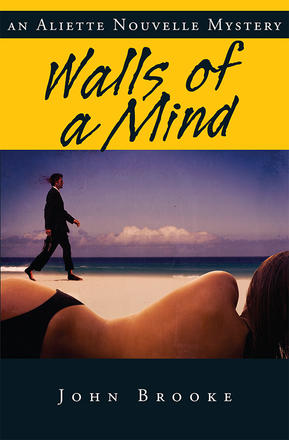 Walls of a Mind

Walls of a Mind

In this fifth installment of the Aliette Nouvelle mysteries, Aliette is now, officially, Chief Inspector Nouvelle. After a difficult breakup with former boss and boyfriend Claude Neon, the inspector is transferred from an urban beat in Alsace to the south of France. She is given ... Read more

In this fifth installment of the Aliette Nouvelle mysteries, Aliette is now, officially, Chief Inspector Nouvelle. After a difficult breakup with former boss and boyfriend Claude Neon, the inspector is transferred from an urban beat in Alsace to the south of France. She is given command of a small brigade at St-Brin, a sleepy town in a valley where wine is the primary industry and source of identity.

When Joel Guatto, scion of an old wine-producing family, and recently defeated political candidate, is shot dead on the beach, it appears to be a politically motivated murder. But is it? As a political candidate, Guatto had been no threat, despite his efforts to rally local wine producers incensed by the cheap Spanish wine imports that are jeopardizing their livelihood. A political amateur, Guatto managed to lose not only the vote, but also his campaign manager-turned-lover, Stephanie McLeod.

The scope of Aliette's investigation widens when it turns out that Stephanie has ties to a Europe-wide anarchist network. Aliette needs Stephanie for her murder case. But French secret service agent Margot Tessier is determined to use the young woman as a disposable pawn in her quest for a much bigger target. Aliette must get to Stephanie first.

John Brooke became fascinated by criminality and police work listening to the courtroom stories and observations of his father, a long-serving judge. Although he lives in Montreal, John makes frequent trips to France for both pleasure and research. He earns a living as a freelance writer and translator, has also worked as a film and video editor as well as directed four films on modern dance. Brooke’s first novel, The Voice of Aliette Nouvelle, was published in 1999. His poetry and short stories have also been widely published and in 1998 his story "The Finer Points of Apples" won him the Journey Prize.

With fourteen towns and forty villages in her purview, she had been busy enough since taking over in February, fulfilling her new role quietly and efficiently, learning the lay of the land. The romance of wine country did not mean people were less nasty, brutal or just plain stupid than their fellow humans anywhere else. Yes, the beat was different: apart from gypsy house-breaking rings, there were no gangs. Gangs were in the city and stayed there. So no extorting and breaking knees. No people-smuggling; illegals came in through the ports and her patch stopped well short of the sea. No white collars siphoning, laundering or otherwise defrauding. Not yet. Make no mistake: wives were bashed, children were abused and abducted, houses were robbed and vandalized, garages torched. Drugs were being dealt. There had been two rapes. A Belgian wintering in his summer retreat had been seriously beaten by a neighbour when he complained a little too loudly about the man's yapping dogs. An armed robbery in Causses had turned into a tense stand-off and negotiation at a cabin in the woods before two sad men surrendered. And these were all serious crimes requiring her expertise. But in almost half a year on the job, not one person had been murdered.

Now someone had, and high-profile, to boot.

One does not wish for murders, but it is natural for a cop to yearn for a challenge befitting her skills. And of course, this was coupled with a need to prove herself to her new peers. Aliette was eager.

And puzzled: The victim was a Joël Guatto, thirty-three, from a prominent wine-producing family. The media were playing up the political angle. The politics of wine. Six weeks before, Guatto had run in the regional elections representing CPNT (Chasse, Pêche, Nature, Tradition), also known as the Hunting & Fishing party. He hadn't made it past the first round, garnering less than one percent of the vote. Yesterday he had been shot dead: one well-placed bullet through the head, according to the morning reports. Joël Guatto lived on the family domaine twenty minutes from Saint-Brin, well within Aliette Nouvelle's allotted territory. But he was gunned down on the same stretch of beach where she herself had been enjoying some sunny oblivion a few hours earlier. The beach, twenty minutes from downtown, was city jurisdiction. And scene of the crime was the bottom-line criterion where it came to the choice of lead investigator.

So why had they called her?

Walls of a Mind is the 5th book in the series but the first I have read. I would not have read the book if it was not on the shortlist for the Best Novel in the 2014 Arthur Ellis Awards sponsored by the Crime Writers of Canada. It is my loss not to have read earlier books in the series...It is a very good book. Nouvelle is a clever woman determined to do her job well but not with the obsessive compulsion of many contemporary North American fictional police to investigate 24 hours a day. She has time for good meals, for a new love interest and for reading -- mysteries being her favourite. I am going to search out earlier books in the series.