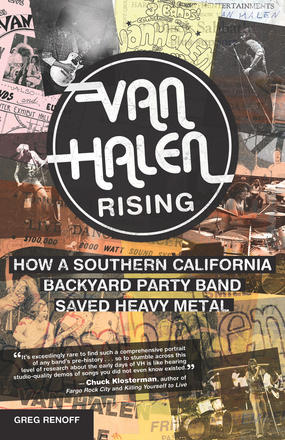 After years of playing gigs everywhere from suburban backyards to dive bars, Van Halen — led by frontman extraordinaire David Lee Roth and guitar virtuoso Edward Van Halen — had the songs, the swagger, and the talent to turn the rock world on its ear. The quartet’s classic 1978 debut, Van Halen, sold more than a million copies within months of release and rocketed the band to the stratosphere of rock success. On tour, Van Halen’s high-energy show wowed audiences and prompted headlining acts like Black Sabbath to concede that they’d been blown off the stage. By the year’s end, Van Halen had established themselves as superstars and reinvigorated heavy metal in the process.

Based on more than 230 original interviews — including with former Van Halen bassist Michael Anthony and power players like Pete Angelus, Marshall Berle, Donn Landee, Ted Templeman, and Neil Zlozower — Van Halen Rising reveals the untold story of how these rock legends made the unlikely journey from Pasadena, California, to the worldwide stage.

“This prehistory is usually glossed over in accounts of the band, but in Van Halen Rising, author Greg Renoff devotes an entire book to it. It’s the tale of hardworking kids with nothing in common learning to fuse pop and heavy metal into a new sound that completely changed the music world. It also vividly shows that the personality clashes that would later destroy the band were there from Day One.” — Rolling Stone

“In an excellent new book called Van Halen Rising, author Greg Renoff argues that, in the era of disco and punk, Van Halen’s arrival saved heavy metal. While that may be hyperbole, there’s little arguing that the backyard party band from Pasadena put Los Angeles back at the center of American rock & roll, where it’s largely stayed ever since.” — LA Weekly

“It’s a rollicking roll through the life and times of a group that mowed through more groupies and drugs than could possibly be good for a young fella. . . a fascinating read.” — Pasadena Star News

“Renoff explores in depth Van Halen’s reluctant journey from back yard band to superstardom and, in particular, the role of David Lee Roth’s ambition and entrepreneurial skills.” — Forbes

“Fascinating (even for non-VH fans) . . . A book almost anthropological in its level of detail.” — Vulture

“Fans of Van Halen’s earliest days. . . are in for a treat next month with the release of Van Halen Rising by American author Greg Renoff.” — Georgia Straight

“Most Van Halen fans have heard about the notorious, alcohol-soaked backyard parties in the Pasadena area that the band played as they built a loyal following — but never knew the details. This is where Renoff’s exhaustive research and meticulous attention to detail truly pays off. Readers are treated to extensive accounts of these bashes. . . . they can almost feel as if they were actually there. . . . a book that’s as entertaining as it is informative.” — Examiner.com

“Bravo, Mr. Renoff. . . . This is a must-read reference, in the same sense that Women and Children First, Fair Warning, and Diver Down are mandatory listening.” — Cleveland Music Examiner

“Renoff’s book is a thoroughly entertaining read that will appeal to every hard rock fan.” — Publishers Weekly

“The author draws on interviews with many key players to tell the band’s story, and he does a fine job of showing what it must have been like for the members of Van Halen . . . The lack of interviews with Eddie Van Halen and David Lee Roth is notable, but not a serious drawback; many good music biographies have been written about stars who did not actively participate in the writing. And this is a very good one indeed.” — Booklist

“Let us guess – you’re one of those people who thinks they know everything about Van Halen, right? You don’t. At least not until you’ve read Van Halen Rising: How a Southern California Backyard Party Band Saved Heavy Metal, the forthcoming book by historian and self-proclaimed Van Halen diehard Greg Renoff.” — Van Halen News Desk

“I had a blast reading Van Halen Rising. Throughout my teen years, there were few things that meant as much to me as the first six Van Halen albums and the original line up of the band. Greg Renoff takes us back to the beginning of all that, to how Dave, Eddie, Alex, and Michael came to form the group, to what the rock world looked like at the time, and to that grit and commitment it took for them to break through. He also puts us right there in Pasadena, at the backyard parties where the big rock sound was born. If you are a Van Halen fan, a real Van Halen fan, this book is a must read.” — Brian Koppelman, screenwriter of Rounders and Ocean’s Thirteen, director of Solitary Man, and podcaster at The Moment

“I thought I knew a lot about Van Halen, until I read this book. It’s exceedingly rare to find such a comprehensive portrait of any band’s pre-history, even for canonical groups like the Beatles and Led Zeppelin. So to stumble across this level of research about the early days of VH is like hearing studio-quality demos of songs you did not even know existed.” — Chuck Klosterman, author of Fargo Rock City and Killing Yourself to Live

“From the outset of Van Halen Rising, it’s clear Greg Renoff reveres the mighty foursome as much as their most ardent fan. With devoted accuracy, Renoff takes us back to the early seventies, when Pasadena kids literally danced in the streets to get a glimpse of their home-town heroes, while music industry execs proclaimed Van Halen had ‘no commercial potential.’ Van Halen Rising delves into the years of practice and perseverance that led to the ‘overnight success’ of Van Halen’s debut album, one of the most successful in music history. Renoff’s writing is consistently punchy and compelling, like Van Halen at its finest. If you’ve got it bad, got it bad, got it bad for Van Halen, get Van Halen Rising.” — Martha Quinn, original MTV VJ, Sirius XM host

“I really loved reading Van Halen Rising. I couldn’t believe the insight Renoff has into the production process behind the making of Van Halen’s debut. He truly gets it! The book is fantastic.” — Ted Templeman, Grammy-winning music producer for Van Halen and David Lee Roth

“Greg Renoff’s fantastic, immersive new book devotes 350 or so pages to [Van Halen’s] early years. . . Van Halen Rising is one of the best rock books to be published so far this year. Even if you aren’t a big Van Halen fan, it’s fascinating to read.” — AL.com

“This is a thoroughly engaging book and will fascinate and astound even those fans who thought they already knew everything there was to know about Van Halen.” — CurledUp.com

“Van Halen Rising is exactly what it promises, the story of an up and coming rock band. It takes you through the teenage rock scene in the LA suburbs of the 1970s, and up to Van Halen’s first album, first tours, and then it is done, leaving the rest of the story for others to pick up. And it doesn’t disappoint in the process.” — A Home in Hespeler

“Reading it is like finding some lost demo tape every bit as awesome as Fair Warning, or stumbling on a bitchin’ Camaro time machine kegger where Jeff Spicoli shows up with his hand in the back pocket of Kim Kelly’s bell bottom jeans.” — The Weaklings

“Renoff’s bio is replete with refreshing colour, details and heretofore unheard insight. . . If you’re into the band, this book is a given; if you’re into well-spun behind the scene.” — Hopscotch Friday

“VH fans should be sure to grab Van Halen Rising — the book is absolutely loaded with details on Van Halen’s beginnings that even the most knowledgeable fans have never heard.” — The Van Halen News Desk

“Renoff’s book has garnered rave reviews since its release earlier this month, and it illustrates just how long and hard the road to success for Van Halen actually was.” — The Canton Repository

“This book is absolutely loaded with wild and interesting details on Van Halen’s beginnings that even the most knowledgeable fans have never heard. A vivid and energetic history of Van Halen’s legendary early years. It’s a must-have!” — Throttle Rock

“Van Halen Rising is a wonderfully written trip through the pivotal early days of a band that would soon be swept up in a wave and become hard rock gods.” — Under the Radar Magazine

“Renoff writes in a thoughtful and conversational voice, one you might hear while talking to one of your buds while listening to the first VH album . . . Not only is Van Halen Rising well organized and researched, at times it’s also laugh out loud funny.” — PopDose.com

“The rags to riches tale, the music lessons, the raucous high school parties; later playing in seedy clubs of Hollywood before being ‘discovered,’ all make for a fascinating read of the history of the boys in the band from our own backyard.” — Friends of the Sierra Madre Library

“The amount of research that Renoff has conducted is mind-blowing . . . I highly recommend this book. Whether you are a hardcore fan of the band or not is of little relevance. This is simply gripping.” — Eternal Terror Webzine

“Such an extensive look at a band’s pre-fame days is rare. Renoff does a phenomenal job, and Van Halen fans all over the world will savor every word of Van Halen Rising.” — The Writer’s Journey

“The extent of Renoff’s research reveals some incredible insight, the kind that fans savor, discuss, and share for years to come. . . You read Van Halen Rising, and you get a warmly written historical guide to one of America’s greatest rock bands. What more could one ask for?” — VintageRock.com

Other titles by Greg Renoff