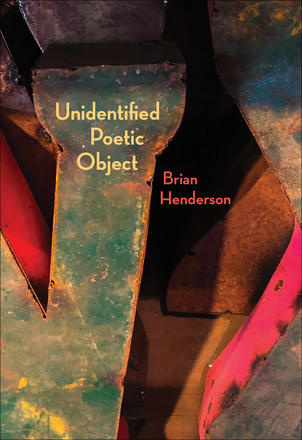 Poems that highlight an excess, an emptiness, and a wilderness on the other side of use.

In Unidentified Poetic Object, his twelfth collection of poetry, Brian Henderson strikes from language an "alphabet of lightning": an animacy and urgency in which every object is potent ... Read more

Poems that highlight an excess, an emptiness, and a wilderness on the other side of use.

In Unidentified Poetic Object, his twelfth collection of poetry, Brian Henderson strikes from language an "alphabet of lightning": an animacy and urgency in which every object is potent with actions, past and present; every action is alive with the potential of what it might move in the world. And since every object is more than we know in our eagerness to turn it to human use, Henderson wants us to dive into that unknown space.

The world is composed of astonishing things, but we are obsessed by their use, their categorization, their systemization, their exploitation--a way of being in which every thing, every body, even the future, can be made available as raw resource. The words in these poems are perturbations or seductions rather than representational resources, are equivocal rather than instrumental; they seek to disrupt the order of the discursive, to trouble the elaborate plans humans have for managing and controlling the earth we abuse. Here words open to produce surprising ephemeral hybridities, things without theory or history or a notion of progress. They elide and interpenetrate, shout and are silent, and in those material interactions there emerges a resonant attention and a politic of tenderness.

"Prismatic, at times apocalyptic, always sharp, Brian Henderson's poems range through physics, visual art, philosophy, history, and, of course, poetry, to probe the locales where worlds slip into other worlds. ...these rich riffs evoke deconstructed landscapes that expose the ruptures caused by settler colonialism. Laced with wit and a voracious mind, these poems are 'unsettling' in the best possible sense." --Jeanette Lynes

Brian Henderson is the author of ten volumes of poetry (including a deck of visual poem-cards, The Alphamiricon), the latest of which, Sharawadji , was nominated for the Canadian Authors Association Award for Poetry in 2012. Nerve Language was a finalist for the Governor General’s Award in 2007.

His work, both critical and poetic, has appeared in a number of literary journals. He has a PhD in Canadian literature and is the director of Wilfred Laurier University Press. He has served as the president of the Association of Canadian University Presses, the treasurer of the Association of Canadian Publishers, and as a board member of Access Copyright, as well served on juries for the Manitoba Arts Council, the League of Canadian Poets, the Kitchener Public Library, and others. He is currently on the board of the Access Copyright Foundation and lives in Kitchener, Ontario, with his wife, Charlene Winger.

Other titles by Brian Henderson