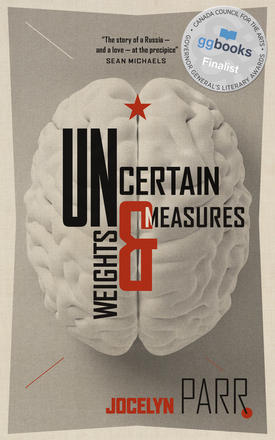 Moscow, 1921. Tatiana and Sasha meet in a bookstore the night it is bombed. In the aftermath of the explosion, Sasha grabs Tatiana's hand and together they run to safety. They fall in love.

A promising young scientist, Tatiana follows her mentor, Dr. Bekhterev, to the Institut Mozga, established to study the source of genius. She thrives in the state-sponsored research institute, but Sasha, an artist, feels left behind in this new world where his art seems without place or function. A rift between them grows.

When Bekhterev suddenly dies, Tatiana is prompted to speculate about the shadowy circumstances of his death. Disconcerted and unable to find answers to her questions, she plunges into doubt — about her work as a scientist, her naiveté about the Revolution, her faith in the state, and her relationship with Sasha.

Provocative and compelling, Uncertain Weights and Measures takes place in the heady days of post-Revolution Russia, when belief in a higher purpose was everything. Written in beautifully incisive prose, Jocelyn Parr vividly captures the ambiance of 1920s Moscow and the frisson of real-life events while also spinning a captivating tale of a love torn apart by ideology and high-stakes politics.

Jocelyn Parr was born in New Zealand, but grew up on Canada's West Coast. Her writing has been published in France, Germany, and Canada and in magazines such as Matrix, Grain, and Brick Magazine. She now lives in Montreal, where she teaches history at Dawson College.

"The story of a Russia—and a love—at the precipice, poised between dreaming and giving in. As in Ferrante’s Neapolitan novels or Bellow’s Seize the Day, Parr’s characters seem to move under the surface of the page—breathing, changing, flawed, and resilient. "

"A great book for lovers of history and science. "

"A historical novel that feels refreshingly contemporary, Uncertain Weights and Measures exposes the tensions between ideology and conviction, politics and art, truth and power. This remarkable debut novel is both a compelling love story and a thoughtful exploration of the human heart and mind. "

— Johanna Skibsrud, author of <i>Quartet for the End of Time</i>

"Uncertain Weights and Measures goes for it and gets there. "

"An illuminating and assured debut. Parr deftly incorporates her historical research into an affecting story about a young woman grappling with the tense intersections between art and science, politics and idealism, duty and love. "

"In this confident and accomplished novel, Parr creates a detailed portrait of a world haunted by the past but uncertain of its future direction. "

"Could very well be read as a cautionary allegory of our own 'brave and visionary time. '" 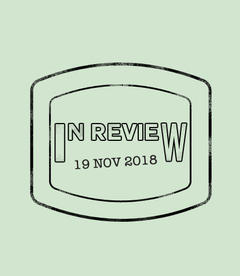 In Review: The Week of November 19th

We started off the week with our annual literary awards hangover, brought you our Gift Guide for holiday book-buying, and learned some rare words (we hope this In Review ensorcells you).