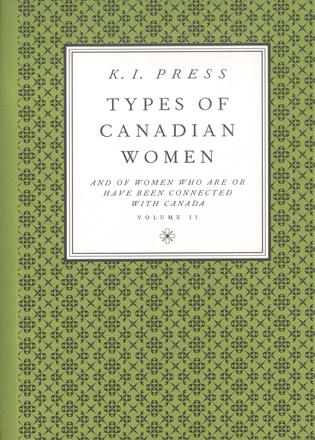 “I’ve worked on and off as a picture researcher for non-fiction books,” says K. I. Press, “during which time I looked at an awful lot of archival photographs. A few years ago I came across a book called Types of Canadian Women, Volume I, a 1903 illustrated biographical ... Read more

“I’ve worked on and off as a picture researcher for non-fiction books,” says K. I. Press, “during which time I looked at an awful lot of archival photographs. A few years ago I came across a book called Types of Canadian Women, Volume I, a 1903 illustrated biographical dictionary of society women?artists, nurses, missionaries, activists and philanthropists, as well as plenty of women whose claim to fame was being rich or titled?who were more or less Canadian. The pictures grabbed me first, but the biographies drew me in. They were so boring, yet there were phrases that suggested what wasn’t being told. Some of these women had been to war zones or lived through rebellions or performed heroic feats that were alluded to in a single phrase. What if, I thought, their biographies told just the good parts? I looked for the book’s promised Volume II to no avail, instead finding a librarian’s note in the catalogue: ‘Volume II never published?’ I knew I had to write it. ”

Written as a fantasia of archetypes, Press’s collection takes a jab at the notions of archetypes and gendered behaviour, and at the patronizing undertones that coloured the original. Illustrated with archival photos, this collection of prose and poetry is an album devoted to a more ambiguously female experience of Canada, stretched across several lives, the poet’s eye opening in a different life and the same life with each turn of the page.

With subtle misunderstandings, quiet subversions and all-out rebellions, Types of Canadian Women, Volume II uncovers the psychological knots that once and still snag female ambition and relationships. Using the turn-of-the-century occupations and preoccupations that shaped the original collection, Press illuminates her portraits of farming, pioneering, politics, writing, painting, acting, athletics, childbirth, homemaking, religion, education, romance and psychosis with fantastical and symbolic elements to create a series of narratives that slip almost imperceptibly from reality into imagination and back again.

Press’s women share an inventive interaction with the Canadian landscape and its emblems, as well as with some of the landmark events in colonial and Confederation history. Weaving practicality and plain-spoken accounts together with dreamlike delusions and escapist leaps, the Canadian women in this volume sidestep more linear versions of events. Ultimately, it is with reverent appreciation and irreverent mischievousness that Press upends the project of naming and definition, and in the process locates many more authentic sources of connection.

K. I. Press grew up in Edmonton and in the Peace River country of northern Alberta. She has also lived in Vancouver, Ottawa and Toronto. She now lives in Winnipeg. Her previous work have received much critical praise and been shortlisted for the Pat Lowther and ReLit Awards. Exquisite Monsters is Karen's fourth collection of poetry.

Other titles by K. I. Press