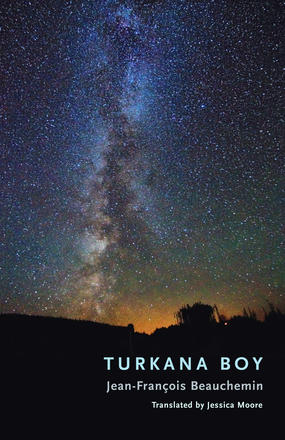 In this contemplative novel-poem, Jean-François Beauchemin invites us to share in the inner world of the grieving Mr. Bartolomé, who, following the mysterious disappearance of his young son, wanders and wonders, seeking to transcend his pain by encountering something larger ... Read more

In this contemplative novel-poem, Jean-François Beauchemin invites us to share in the inner world of the grieving Mr. Bartolomé, who, following the mysterious disappearance of his young son, wanders and wonders, seeking to transcend his pain by encountering something larger than himself. Continuously occupied by the memory of his lost son, Bartolomé’s quest leads him from the city to the countryside and then to the edge of the ocean, where he marvels at the beauty of nature but cannot penetrate its mysteries.

Through reference to the two-million-year-old “Turkana Boy,” the fossilized remains of a boy found in 1984 near Lake Turkana, Kenya, Beauchemin addresses processes of memory and the long history of human evolution. Beauchemin’s character Bartolomé sees in the lives of the boys—separated by nearly two million years—a kind of twin destiny. Has the passage of millennia changed the intensity of human feeling at the loss of blood relations? “Who knows what they had felt? Had the same emotions, those associated with incommensurable loss, broken their bodies, as they had his? Over and above morphological differences sculpted by the passage of millennia, was there something resembling a permanence of feeling, a sort of eternity for the murmuring of the heart, transmitted through the ages by the bonds of blood?”

Turkana Boy offers a poignant examination of grieving and one man’s search for understanding. This surrealist narrative is punctuated with magnificent musings on the world and startling questions about what it means to be alive.

Jessica Moore is an author and literary translator. Her first book, Everything, now (Brick Books 2012), is a love letter to the dead and a conversation with her translation of Turkana Boy (Talonbooks 2012) by Jean-François Beauchemin, for which she won a PEN America Translation award. Mend the Living, her translation of the novel by Maylis de Kerangal, was nominated for the 2016 International Man Booker. The Whole Singing Ocean (Nightwood 2020) blends long poem, investigation, sailor slang and ecological grief, and was longlisted for the League of Canadian Poets’ Raymond Souster Award. She lives in Toronto.

“Grace of writing, depth of feeling and a plea for the beauty of things: Jean-François Beauchemin continues to set himself apart as a remarkable novelist. ” – ELLE Quebec

“The universe of Jean-François Beauchemin’s novels is haunted by the ghost of childhood—its naiveté and purity as much as its cruelty and wildness. ”– Voir

“Reading Jean-François Beauchemin is an experience in itself. It’s like an exercise in meditation; like pausing in front of a particular image, in a suspended moment. It is him in the image—as he projects himself—but it is ourselves that we see, or rather those aspects of our own lives which have escaped us. ”
– Le Devoir

“An excellent novel and an extremely beautiful reflection that will move the reader deeply. ” – Radio-Canada

“[Jean-François Beauchemin] is an author known for his writings about life, full of deep and heartfelt reflection. He opens the door wide to allow us into the core of his being. He is the kind of person you meet and with whom, after the first sentence, and without quite knowing why, you are talking earnestly about the meaning of life. ”
– Le Passe Mot

“Beauchemin’s writing falls on us like a mist, like sorrow, slowly, in the soft nightfall of things. ” – Radio Basse-Ville

Other titles by Jean-Francois Beauchemin

Other titles by Jessica Moore