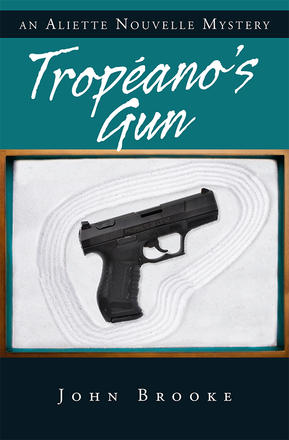 HQ has ruled that Chief Inspector Aliette Nouvelle's failure to carry her gun directly contributed to the messy conclusion of a major murder case she'd led the previous summer. Her career now depends on a drastic about-face. Aliette has been ordered to come into the city to ... Read more

HQ has ruled that Chief Inspector Aliette Nouvelle's failure to carry her gun directly contributed to the messy conclusion of a major murder case she'd led the previous summer. Her career now depends on a drastic about-face. Aliette has been ordered to come into the city to practice at the Beziers police shooting range and attend counselling sessions two nights a week with psychologist Gabrielle Gravel. For Aliette, this is not only humiliating, it's inconvenient. Beziers is a 40-kilometre drive from her home base in Saint-Brin, a sleepy wine town in the south of France. But she will required to attend until she can prove she is prepared to use deadly force in the execution of her duties.

Meanwhile, a killing spree is taking place in Beziers. After the first savage knifing of a homeless young man, a deranged street person is suspected. But the working theory changes when victim number three turns out to be PJ Inspector Pierre Trop&eacuteano. A knife is left in his gut, and his gun is gone. It will be used to kill the next victim, another homeless young person.

As she navigates Beziers' night streets, trying to come to terms with the SIG Sauer SP2022 in her holster and how it affects her core identity, Inspector Nouvelle finds clues to the whereabouts of Trop&eacuteano's gun -- and a killer. Aliette's unofficial, off-duty investigation is motivated by a need to defend her beleaguered colleague, Chief Inspector Nabi Zidane, head of the city-based Police Judiciare force. But the killings in the city are not her business. One false step and she could lose her job. Or her life. Is she ready to use her gun?

Inspector Vincent Spanghero had quit the force last spring, very suddenly, then disappeared. No one, including his wife and children, had seen him since. The weeks and months leading up to that day had been tempestuous. Aliette, working through her first year at her new posting, was still a stranger. She had been aware, but from a distance. But it was no secret Vincent Spanghero had tried and apparently failed to live with the fact that Nabi Zidane, his former partner on the street, had won the top city job. The situation had been simmering for more than a year, since Nabi had moved into the corner office on the third floor at Hotel de Police. Openly bitter, Spanghero had grown stubbornly maverick. His volatile temper even erupted during instructions -- Sergio had felt the brunt of it more than once. 'It rarely had to do with the case at hand. It was simply and crudely to make a point. In giving the job to Nabi, they had made a big mistake. Vincent seized every opportunity he could to let them...us, everyone know.'

Aliette had not known Sergio then, except as a face in the hall at the Palais de Justice.

Sergio ventured that Vincent Spanghero had probably sealed the deal five months before his sudden departure, when he'd ignored a direct command from Nabi, and sent his men into a dangerous situation. One was killed -- Inspector Menaud Rh&eacuteaume. In the aftermath, Zidane and his group had tried to cope and carry on in what amounted to a failed attempt at solidarity. Politically iffy, psychologically impossible. 'But Nabi tried. Not easy... It was mainly for Spanghero, his career, if not their friendship. And Vincent tried too. For a bit. Tried to calm down. He did calm down. Got kind of silent, is what I'm hearing. Then he walks in one day last June, drops his warrant card on Nabi's desk and that's it. Gone. Totally gone.'

'Not yet... Gloves. Hats. Cold out there these nights.'

'Not this time. No note on or near Inspector Trop&eacuteano. Or at least none found. It's possible one of the crowd may have picked it up. Then forgot.'

'They do that.' Scattered brains filled with too many noxious things. 'But Nabi. They going to bring it to him?'

'Of course not. Nabi can't have anything to do with it now.'

Sergio looked up, abashed. Sometimes he said things the wrong way, things that implied she was a junior -- and he was a judge. He smiled and adjusted his reply. 'No. Not yet.'

'So why you, then?' If it was not yet an officially assigned case.

'They're panicking. Almost. I mean, apart from Nabi's claim, there's still really nothing to build a case on. Maybe the notes. Hugues is hearing from a lot of people in Nabi's division and others who know Spanghero that the notes sound a lot like Vincent's ranting. Before he went all quiet. Even Nabi mentioned it. They figure Trop&eacuteano noticed too and went out looking. Menaud Rh&eacuteaume was Trop&eacuteano's partner. Good pals. There's really no other explanation for him.'

Aliette mused as to how that fit with Nabi's fretting over the notes the day before.

Sergio stared into his wine. 'Nabi's nightmare has resurfaced -- in spades, I'm afraid. Last spring, trying to work it out with Vincent, some people started stirring up a lot of shit. Mario B&eacutedard? Not nice, some of things Mario was starting to say.'

'Mario can definitely do ugly.'

'But people hear him, especially now he's up there on the third at HQ.'

'Makes me wish you were.'

'Let's hope so... He managed to walk past it last spring. Now this.'

'If it really is Nabi's knife,' mulled Aliette.

'It is... But that is not being shared,' cautioned Sergio. 'Nor Vincent's name.'

'They'll announce it Monday. But it's a still a crazy street person. That's the official line. No one wants people thinking there's a rogue cop out killing people. Not good for the public's confidence. An angry cop killing his former colleagues is worse.'

'How long can they keep the lid on something like this?'

'Depends on who knows and how they feel about it.'

'But you -- what are you supposed to be doing?'

'It might not be Vincent.' Though it surely was. And Sergio Regarri was to very unofficially work with top city police investigator Hugues Monty to determine which way the thing should head before any definitive public statement was made. 'I'm supposed to be quietly talking to relevant people, establishing what we all hope and pray isn't, actually is the case. Monty will continue working on the first two victims, looking for a street-related thing. Or whatever.'

'Nabi definitely has a problem. But we all do. This gets out the wrong way, the entire house could come tumbling down.'

'Yes...' Aliette poured herself the last of the wine, mulling a city police force in panicked disarray. She tried to spin a positive from Sergio's grim scenario. 'But if it's Spanghero and he's returning the knife, maybe that means he's done. It's over.'

Sergio gave his head a glum shake. 'And it's complicated because Trop&eacuteano's gun is missing.'

She got up to fetch another bottle and mulled the ramifications of that. Presenting bottle and corkscrew to Sergio, Aliette ventured, 'So maybe it isn't Spanghero. He'd have his own gun.'

Sergio confirmed, 'Vincent's service arm is unaccounted for -- like him. He quit, but he never turned in his gun.' He pulled the cork and tasted. Shrugged. Filled his glass. 'But if the knife's a gesture -- returning Nabi's gift, as you say -- so is taking Trop&eacuteano's gun. Like a warrior taking a scalp?'

'The more interesting question is, was Trop&eacuteano tracking Vincent? Or vice-versa?'

'Why would he target Trop&eacuteano?'

'Trop&eacuteano was on the operation that brought it to a head. He saw Vincent put his phone on a window ledge, still open, and go in with Rh&eacuteaume while Nabi was still in the process of giving orders. Total insult, not to mention blatant disregard for orders. He said as much to the enquiry, if not to the media. Rh&eacuteaume was young, next generation, like him. Trop&eacuteano couldn't wait to testify. I'm told Vincent hates Trop&eacuteano as much as he hates Nabi.'

'But the other two?' Two homeless kids.

'That's the hard part. The notes? Maybe Vincent needed some bodies to communicate his cry of pain? Didn't really matter who. Now the notes have been...noted? And it's a good cover.'

'You're saying he doesn't want to kill the whole city, just his old friends from work?'

'It's a theory.' Magistrate Regarri could be just as mordant as any street-hardened cop.

'So they may have sent him out expressly. Poor Trop&eacuteano.'

'Maybe. Though obviously not on the clock. I'll have to talk to some people about that.'

'Nabi most of all. But we need to let Nabi rest, get over the shock, I'm sure he'll have some things to tell us.'