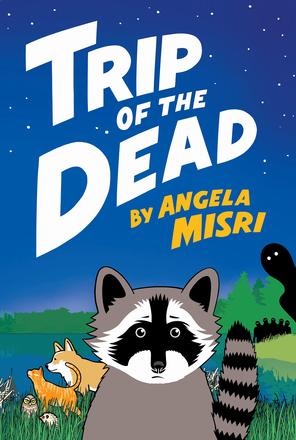 Trip of the Dead

Trip of the Dead

Where have all the raccoons gone?

The answer to that question is scarier than any zombie horde. People have discovered that raccoons are more than just rodents who knock over their garbage bins; they might be a tool for ending zombie-ism.

And that is bad news for raccoons.

“In case you need a little humour with your thrills and chills, check out Trip of the Dead by Angela Misri (Dancing Cat Books, 9-12), the hilarious sequel to her comical zombie thriller, Pickles vs. The Zombies. Trip, the intrepid raccoon hero of her earlier book, with a little help from his feline friend, Ginger, and Emmy the Wonder-Hamster, leaves his pet humans and sets off on a quest to see if rumours that raccoons are being held hostage in a zombie-free encampment are true. ”

“Angela Misri's work is whimsical and creative, relating human conflicts and insecurities to the animals in her story, and thereby making them approachable. Having a fearful and unsure character play the hero, Misri shows that anyone can find courage, as long as they have the right motivation. ”

“… Children who enjoy animal stories filled with outdoor adventures and friendships will be drawn to Trip of the Dead. Recommended. ”

“Trip of the Dead is hilarious, it’s action packed and suspenseful and a reminder that a family can be made of many different species. ”

Other titles by Angela Misri