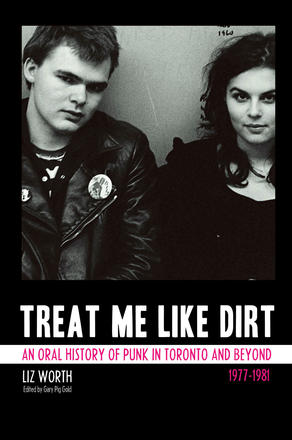 Treat Me Like Dirt captures the personalities that drove the original Toronto punk scene. This is the first book to document the histories of the Diodes, Viletones, and Teenage Head, along with other bands (B-Girls, Curse, Demics, Dishes, Forgotten Rebels, Johnny & the G-Rays, ... Read more

Treat Me Like Dirt captures the personalities that drove the original Toronto punk scene. This is the first book to document the histories of the Diodes, Viletones, and Teenage Head, along with other bands (B-Girls, Curse, Demics, Dishes, Forgotten Rebels, Johnny & the G-Rays, the Mods, the Poles, Simply Saucer, the Ugly and more) and fans that brought the punk scene to life in Toronto. This book is a punk rock road map, full of chaos, betrayal, pain, disappointments, failure, success, and the pure rock ’n’ roll energy that frames this layered history of punk in Toronto and beyond.

Treat Me Like Dirt is a story assembled from individual personal stories that go beyond the usual “we played here, this famous person saw us there” and into sex, drugs, murder, conspiracy, booze, criminals, biker gangs, violence, art (yes, art) and includes one of the last interviews with the late Frankie Venom (singer of Teenage Head). The book includes a wealth of previously unpublished photographs.

This uncensored oral history of the 1977 Toronto punk explosion was originally published in 2010 by Bongo Beat and is now available to the trade. Exclusive to this edition is a selected discography of all key Toronto punk releases referenced in the book, contributed by Frank Manley, author of Smash The State (1992), the acclaimed and pioneering discography of Canadian punk (and subsequent vinyl compilations) that activated the current international interest in Canadian punk from the ‘70s and early ‘80s.

Liz Worth is the author of six books, including Treat Me Like Dirt: An Oral History of Punk in Toronto and Beyond, and No Work Finished Here: Rewriting Andy Warhol (BookThug, 2016; nominated for the ReLit Award in the poetry category). She was born and raised in Toronto, where she continues to reside.

John Hamilton: We had a band called the Three Little Pigs and it was like a heavy metal trio. We went out east and we rented a house trailer and played around Fredericton and Moncton and all that.

I came down with hepatitis while we were out there because I’d been shooting up. Toronto was the speed capital of the world in 1969; you can’t believe how much methedrine there was in this city. It was unbelievable, unbelievable. We were shipping it into the United States; like I knew dealers and stuff like that. Everybody was doing speed and shooting it up. We were all crazy.

Chris Haight: We closed up shop for Top Ten because we just weren’t in synch with the word “professionalism. ” We just weren’t.

Johnny had hepatitis. He looked like a walking banana. He was delirious and this and that.

John Hamilton: We had reached our limit on the East Coast and were running out of money and we couldn’t pay our rent on the trailer park. We were like the original Trailer Park Boys, literally. It came down to the landlord banging on the front door of our house trailer as we were jumping out the back door and climbing into our truck. I had hepatitis and was barely getting around. I think I’d been eating all these oranges to try to fight the jaundice and I’d broken out in hives, too. But we had to do one more gig to get enough money to get back to Toronto.

We had one more gig booked at a community centre or something for a hundred and fifty bucks. So we booked ourselves into a hotel there downtown. I think it was called the Colonial Inn. I managed to play the gig with a fever of probably a hundred and ten or something like that. The next day we skipped out on our hotel bill by climbing out the window. We were bad people; we were bad.

We took off to head back to Toronto, and by this time we were fighting amongst ourselves like crazy. That kind of pressure and starvation and all that and getting on each other’s nerves like bands always do — of course Chris Haight and I were at each other’s throats.

So anyway, we were leaving Fredericton in the dead of winter.

Chris Haight: We were on our way home after we successfully closed shop for Top Ten, ha ha ha, with two tins of Hi-C and some baloney sandwiches. Things just didn’t pan out, and we were taking these amphetamines so we could just drive straight through all the way home. We didn’t have any money for lodgings.

John Hamilton: Chris Haight is the worst driver in the world. He’s been in so many accidents. He was going too fast and I kept saying, “Slow down, slow down, slow down,” and he didn’t, and he hit a patch of black ice or some snow.

Chris Haight: So next thing I know we’re off the highway and we’re doing these rolls in the truck. We were out there and there was gear all over the ravine and stuff like that.

John Hamilton: The back doors came off the truck and all the gear went flying into the snow.

Chris Haight: Everybody’s just wired on amphetamines for starters, and Johnny’s walking around with this condition and he’s going, “Aw jeez. I’m just gonna phone my mom. ” He was saying all the wrong things. We were like in shock and there’s shit all over the gear, and we were wondering how the hell we were even gonna make it home. The van wouldn’t even start.

Myself and Bruce, the bass player, we kind of threw everything down. And it was really funny because we had rope with us, and we just tied two or three laps of rope around the whole van so it would keep the side and the back doors intact. I’m looking at Bruce going, “If we hang around with John, we might just have to kill him. ” Ha ha ha.

John Hamilton: At that point I just said, “I’m going back to Fredericton. ” I had a girlfriend there who would take care of me. So I took a cab back to her house and she nursed me back to health. A woman named Donna Greer — I probably would have died if it wasn’t for her. And those guys, they bungee-corded the back doors of the truck and put the gear back in; in the winter with no heater. It was a total disaster. That was our first tour.

Chris Haight: We jumped back in the van and just headed for Montreal, where I was pleasantly surprised later because Bruce pulled out a credit card that wasn’t his. It was one of the big, big hotels in downtown Montreal where you pull in front, and some guy comes running out with the white gloves and … gets this van that’s rolled about five or six times off the highway. He takes the van away and we’re room serviced and this and that. Eventually, we all made it back home.

John Hamilton: The Toronto music scene had really deteriorated from the days of Yorkville when there were original bands. In the Yorkville days the drinking age in Toronto was twenty-one, so all the younger people went to coffeehouses where you got a lot of original music being made. Then they dropped the drinking age to eighteen and all the people started getting into bars, so then it became bar band music and the whole scene that gave birth to Neil Young and the Paupers and Kensington Market — that all died out.

When I was first starting out, the clubs in Toronto were the Gasworks, the Generator, the Coal Bin, and then later on the El Mocambo. But basically what they were was the whole room was full of tables and chairs and there would be a dance floor the size of a postage stamp because they didn’t want to give any floor space away to a table where they could sell beer. They would have cover bands playing there all the time, and they would just herd the people in, pour as much draft beer into them as possible — which they would be watering by about fifty per cent after a couple hours — and then pour them out again at night. And all the bands were cover bands, and they all had to belong to an agency, to a musicians’ union, so it was really controlled.

“The people involved were, and are, intensely passionate about the music, the Toronto scene, their places in it. Treat Me Like Dirt: An Oral History of Punk in Toronto and Beyond 1977-1981 reflects its subjects; it’s filled with that same punk intensity and passion. ” — Popmatters. com

“Easily one of the best rock biographies you’ll read this year. ” — Montreal Mirror

Other titles by Liz Worth