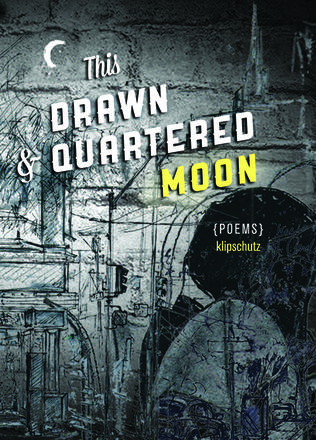 This Drawn & Quartered Moon makes pre-millennial San Francisco its epicenter, and from there ranges out in time and space. Characters abound. The reader will meet a plagiarist, a Vietnam vet named Othello, a Mafia don, a drug mule en route to jail, Elvis Presley (the poet’s ... Read more

This Drawn & Quartered Moon makes pre-millennial San Francisco its epicenter, and from there ranges out in time and space. Characters abound. The reader will meet a plagiarist, a Vietnam vet named Othello, a Mafia don, a drug mule en route to jail, Elvis Presley (the poet’s father was his doctor), a “Sculptor of the Lower Fillmore Head Shot,” a dying Arab king and a pre-fame Courtney Love.

“Autodidact and gregarious loner” klipschutz mixes the personal and the public, satire and romance, dramatic monologue and prose poem, street swagger and subtle song. Over ten years in the making, this collection evokes the restless spirit of predecessors such as Nicanor Parra, Gregory Corso and Kenneth Patchen.

Praise for This Drawn & Quartered Moon:

“A succinct, speedy chronicle of events as they come at the author with bewildering multiplicity and congestion. To encompass it all, he responds with such variety that some poems look surreal despite their very real particulars.” (Carl Rakosi, The Collected Poems)

"... there’s a pretty fine ride to be had in This Drawn & Quartered Moon ... A close examination of the man’s work on paper reveals that, more than mere zaniness, there is frequently a beguiling complexity to his poems that lingers long after their reading. Reviewing a book of poems by klipschutz is a little like critiquing a force of nature: the first instinct is to step back uncritically and admire the man’s penchant for conversational wit and incisive panache. …" (The Pedestal)

Klipschutz (pen name of Kurt Lipschutz) is the author of three previous volumes of poetry, Twilight of the Male Ego, The Good Neighbor Policy, and The Erection of Scaffolding for the Re-Painting of Heaven by the Lowest Bidder. His work has appeared in periodicals in the U.S., Canada, and the U.K., and numerous anthologies. Also a songwriter, he co-wrote Chuck Prophets 2112 critically acclaimed Temple Beautiful, a love letter to San Francisco stained with tears. Born in Indio, California, he lives in San Francisco, his home of thirty years.