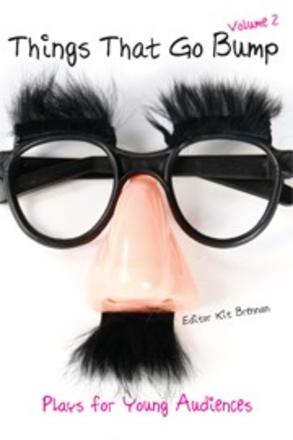 These six recent Canadian plays for elementary school age audiences is a companion volume to 2009’s Things That Go Bump, Volume 1.Lig & Bittle by Elyne Quan and Jared Matsunaga-Turnbull:The story of Lig, who is big, and Bittle, who is little, as they embark on a funny, wild ... Read more

These six recent Canadian plays for elementary school age audiences is a companion volume to 2009’s Things That Go Bump, Volume 1.Lig & Bittle by Elyne Quan and Jared Matsunaga-Turnbull:The story of Lig, who is big, and Bittle, who is little, as they embark on a funny, wild and adventure-filled journey to a place called Perfeckt Phitt, in hopes that they’ll find somewhere to belong.A Giraffe in Paris by Mark Haroun:When the young Prince of Egypt sets out to bring a giraffe to the King of France in Paris, blistering heat, crocodiles, a scheming circus ringleader and growling wolves are just some of the adventures that mark their cross-continental journey.The Secret Life of the Octopus by Clem Martini:When Leah and Willis are forced to serve their detentions in their school’s gloomy science room they reluctantly meet and then become attached to the mysterious eight-legged occupant of the corner aquarium.Bluenose by Emil Sher:Three bumbling, colonizing, red-nosed pirates get more than they bargained for when a blue-nosed captive punctures their assumptions and beliefs.The Incredible Speediness of Jamie Cavanaugh by Chris Craddock:All her life, people have told Jamie Cavanaugh to “Slow down!” Jamie knows she is developing Super Speed, but her parents suggest the culprit might actually be ADHD.Under the Big Top by Jan Derbyshire: About to be heads over heels in love, ZooZoo hesitates; why did her happy-go-lucky clown parents divorce, when they were all under the big top and living the happy dream?

Editor Kit Brennan is an award-winning playwright whose work has been seen across the country. She is a faculty member at Concordia University’s Theatre Department in Montreal, where she coordinates the undergraduate playwriting specialization.

Born and raised in Montreal, Emil Sher taught English at a secondary school in rural Botswana before returning to Canada to pursue a degree in creative writing. He has written professionally ever since, in a variety of genres, including stage plays, radio dramas, short fiction, essays, and childrenâ??s television. He is particularly drawn to character-driven stories, narratives fuelled by individuals struggling to navigate their way through a world rarely of their own making. His works for stage include the adaptation of Hanaâ??s Suitcase, Mourning Dove, Derailed, and Sanctuary. His radio plays have been broadcast around the world, and three have been collected in Making Waves. Emil lives in Toronto with his wife and two daughters but spends summers (and as many weekends as he can squeeze in) in Morin Heights, Quebec.

from foreword by Kit BrennanThings that Go Bump, Volume 2 : Plays for Young Audiences is a collection of recent Canadian plays for elementary school age audiences; it is a companion volume to Things that Go Bump, Volume 1: Plays for Young Adults.These six plays are road and audience-tested, seasoned by professional and touring productions covering most of Canada’s provinces and into the United States. Through humour and great characters, the scripts explore large issues with an entertaining verve.Three of the plays (Lig & Bittle, Bluenose and Under the Big Top) employ the art of clowningâï¿½ï¿½in various ingenious manifestationsâï¿½ï¿½to explore large themes of longing and belonging. Two of the plays (The Secret Life of the Octopus and The Incredible Speediness of Jamie Cavanaugh) take place in the child’s real-life world of school and home, but follow them beyond and into the world of imagination and exploration. A Giraffe in Paris is based on a real event in the early nineteenth century, and whisks the audience into a travel adventure. Cast size for the plays varies from two to four actors.The playwrights reside in Toronto, Edmonton, Calgary and Vancouver; as well as writing for young audiences, they also write for film and television, they are directors and actors, they teach at universities and other professional training schools. The theatre companies which workshopped, commissioned and/or produced and toured the plays are based across Canada; these fine companies include Black Theatre Workshop (Montreal), Carousel Players (St. Catharines), Citadel Theatre (Edmonton), Concrete Theatre (Edmonton), Geordie Productions (Montreal), National Arts Centre (Ottawa), Neptune Theatre (Halifax), Persephone Theatre (Saskatoon), Quest Theatre (Calgary), Roseneath Theatre (Toronto), and Theatre New Brunswick (Fredericton).Everyone involved in theatre for young audiences will speak of the wonderful sense of fun it generatesâï¿½ï¿½and also of the exciting honesty of the audience. If they love it, they’ll tell you so; if they’re bored, you’ll know it. I asked each writer to talk about their experience writing this play, why and how it came about, what happened in the play’s evolution, and how it has been received by the young people for whom it was created. These notes by the writers can be found at the end of each script.

Other titles by Emil Sher

Other titles by Chris Craddock