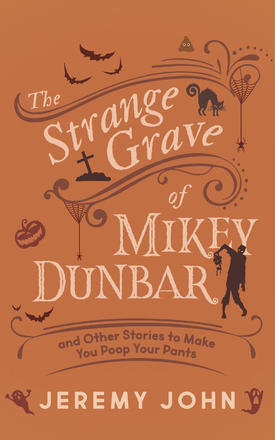 The Strange Grave of Mikey Dunbar

The Strange Grave of Mikey Dunbar

A creepy collection of spooky short stories perfect for reading out loud any time you want the fun of a good fright.

Boo! See, scared you already. This collection of short, spooky stories is perfect for reading out loud on Halloween night, at a sleepover, or around the campfire. ... Read more

A creepy collection of spooky short stories perfect for reading out loud any time you want the fun of a good fright.

Boo! See, scared you already. This collection of short, spooky stories is perfect for reading out loud on Halloween night, at a sleepover, or around the campfire. Jeremy John takes you on a frightening trip to the past, where Wild West criminals meet the hangman and brave knights battle monsters in the forest, through to today, where young vampires find victims through dating apps and spirits possess smart speakers.

Turn out the lights, grab a flashlight, hide under the blankets, and enjoy the fun frights of ghosts who feed on trick-or-treating kids, a pumpkin patch that hides a terrible secret, and who — or what — is buried in the grave of Mikey Dunbar.

Jeremy John is currently ranked as the sixty-second most famous person from Brantford, Ontario. (Look it up. There are a lot.) He is the author of Robert’s Hill (or The Time I Pooped My Snowsuit) and Other Christmas Stories. Jeremy lives with his wife, kids, and a dog he pretends not to like in Sudbury, Ontario.

This guy scares me.

I can't wait to share these stories with my kids. Jeremy John has the perfect stories for a frightening good time. A fun spooky read, like Goosebumps meets the Treehouse of Horror.

Jeremy John is a master of putting himself into the mindset of a kid and capturing the magic and mystery of a good scary tale. This collection of short stories is easy to read and best read in the dark with a flashlight.

A fun read for all ages. And a little off the hinge in all the right places.

Dark and whimsical with plenty of wickedly unexpected twists that will most certainly stop your heart and delight even the more experienced fans of horror literature.

Other titles by Jeremy John